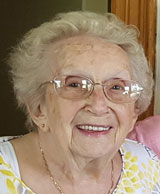 Muriel Lucy Brand (nee Getty) died December 27, 2018 at Prince Edward County Memorial Hospital in Picton after an extended hospital stay. She was born February 22, 1926 in Tomifobia, Quebec, the daughter of Mary (Westover) and Erwin Getty. After a lifetime in Lennoxville Quebec as a teacher, municipal councilor and community volunteer, Muriel spent the last 19 years of her life in Picton where she continued her commitment to her church and volunteering. Her persistence and determination served her well as a student in her youth, adulthood, as a leader in the teachers’ union, and as one of the volunteer founders of Uplands, a cultural centre and museum in Lennoxville. She and her husband Rodney were married on June 26, 1946 and were able to celebrate their fiftieth wedding anniversary before he died on December 19, 1996. They raised three daughters, with whom they enjoyed family camping trips and building a family cottage which they took pleasure in sharing with their children and grandchildren. Muriel is survived by her daughters Sandra de Sousa (Sergio), Picton; Pat Weiler (John, deceased 2015), London ON; Margaret (Robin Orr), Westport; and grandchildren Jamie Weiler (Shannon); Mark Weiler; Alana McConnell (Brad); and Erica de Sousa (Ben Sivak) and great grandchildren Kaleb and Rylan McConnell, Mayla and Olin Sivak, Hayden Weiler, and Brady and Samantha Fletcher. Friends called at the Whattam Funeral Home, 33 Main Street, Picton on Sunday December 30th from 1 until 3 p.m. Funeral Service was held at the Picton United Church on Monday at 10:30 a.m. The Rev. Steve Spicer and Rev. Richard Hamilton officiated. Cremation to follow. If desired, donations to Habitat for Humanity Prince Edward Hastings, 365 Bell Boulevard, Belleville, ON, K8P 5H9 or the Loyalist Humane Society P.O. Box 6108 Picton, ON, K0K 2T0 would be appreciated by the family. Whattam Funeral Home, 33 Main Street, Picton, ON www.whattamfuneralhome.com