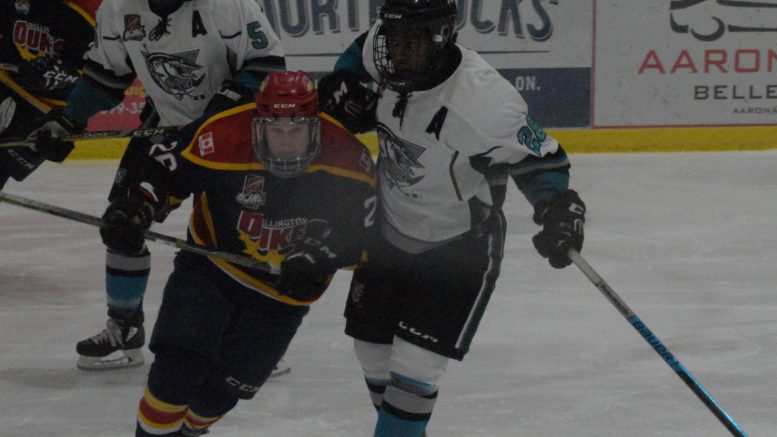 The Wellington Dukes got 2019 off on the right foot as they returned to the rink after a two-week Christmas holiday break.

The Dukes (20-17-3) rang in the new year on Friday in Pickering where newly acquired netminder Logan Bateman was just 15 seconds away from an opening game shutout.

Bateman would wind up losing the goose egg but not the contest as he made 25 stops in a 3-1 Wellington win.

The former Nepean Raider was in the net for the Dukes two days later as the club welcomed the pesky Lindsay Muskies for an afternoon tilt at Lehigh Arena. After out shooting the the Muskies 35-14 and out scoring them 4-1 through two periods, the Dukes let the game devolve into a firefight, but would wind up the victors at an 8-4 margin.

After closing out 2018 with an emotional 2-1 overtime victory over visiting Kingston, the Dukes continued in a path of late-game heroics on Friday.

After a scoreless contest through 50 minutes where Bateman and Panthers netminder Tanner Sheppard matched one another save-for-save, Pickering blinked at 10:30 of the final stanza. Ben Woodhouse managed to convert an Andrew Rinaldi feed to give Wellington a 1-0 lead that was doubled under three minutes later when Tyson Gilmour notched his 15th of the season.

Up 2-0, Wellington really took it out of the cats’ paws with under a minute to go as Dan Panetta launched a puck into a vacated Pickering net.

Everything seemed to be pointing to a shutout in Bateman’s Wellington Dukes debut but a Riley Girard volley with just 15 seconds left leaked into the visitors’ net.

“We tried to keep it simple, keep it physical, and get back into it as fast as we could,” Wellington coach John Druce said. “They really bought into the message and we kept it as easy and simple as we could until we got our break.”

The head coach said he felt for Bateman when he gave up the last-second goal, slightly spoiling what was still a solid debut.

“He played well and the guys were committed in front of him. It was good start to get back into the season,” the coach added.

On Sunday, the Dukes had the contest well in hand after two periods thanks to goals from Zach Uens, Woodhouse, Elijah Gonsalves and Jacob Vreugdenhil but still had to keep scoring to stay ahead of Lindsay.

After a Tim Fallowfield power-play blast in the first minute of the third pushed the Dukes ahead 5-1, Lindsay’s Greg Arnburg responded at the 6:14 mark.

Adam Usinger would put Wellington back up by four goals under a minute later but a pair of Lindsay tallies from the sticks of Brennan Stapleton and Joey Campbell in less than a one minute took the game from the column of no-doubter to something a little more in question at 6-4.

The contest was settled with just under two minutes left as Fallowfield air mailed the puck into an empty Lindsay net.

With just nine seconds left, Dukes leading scorer Rinaldi notched his first goal of the weekend and while these types of late goals are usually scoresheet fodder best left out of meat of recaps, the tally was significant in that it capped off a scoring explosion for Woodhouse as the Hamilton native picked up the lone assist on the goal.

After helping set up the overtime winner on Dec. 21 against Kingston, Woodhouse returned from the holiday with a spring in his stride and has notched seven points (two goals, five assists) in his last three games.

It’s taken him a little while to adapt but he’s really starting to fit into a role where he’s ready to play every night and contribute as one of our more important players,” Druce said of Woodhouse. “When he was skating with Frank Vitucci and Dylan Massie I though he was playing well and we shook it up a little bit this weekend and he responded very well.”

Wellington will host Whitby on Friday, play in Georgetown on Saturday in the club’s first return to Alcott Arena since Game 5 of the 2018 OJHL Buckland Cup final, and then return home to take on the Buffalo Jr. Sabres at Lehigh Arena for a 1:30 p.m. puck drop Sunday.