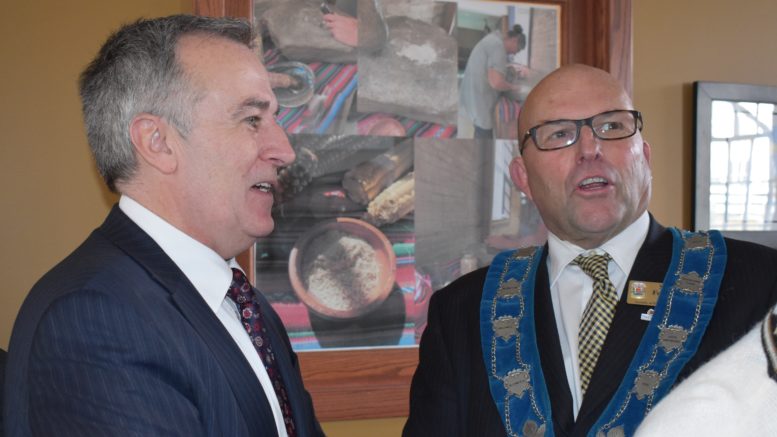 The usual pomp and circumstance and a large crowd of visitors and constituents helped forge a festive feeling at Macaulay Museum on Sunday afternoon. 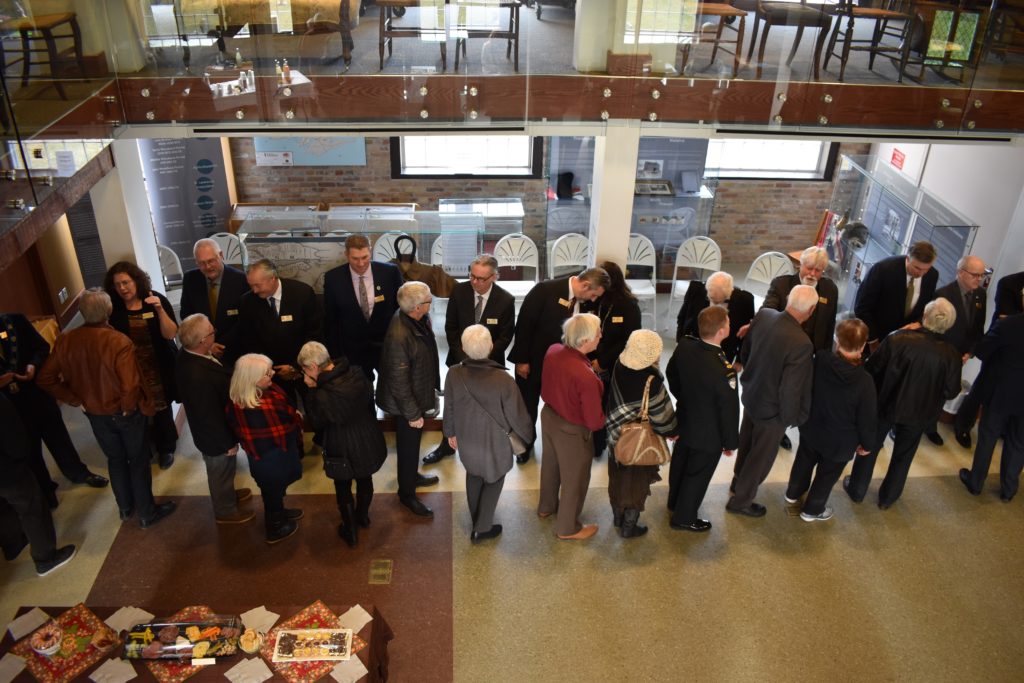 Hundreds of constituents and well-wishers lined up throughout the afternoon to meet members of Prince Edward County council at the 2019 New Year’s Levee. (Jason Parks/Gazette Staff)

And, given it was the first levee of an incoming council, voters and residents turned out in force to support their councillors, wish them well and even remind them of a campaign pledge or two when the business of the municipality get underway this week.

After a series of brief introductions of the members of a new and eclectic county council, Mayor Steve Ferguson said whether the members of the municipal governance body had generational roots in this island community or were drawn to it like the Loyalist ancestors of old, unity between new and old County families and the communities doted throughout the former townships was paramount.

“Whether we are from Prince Edward County or chose to live here, we all will be respectful of the reasons we are here,” Ferguson said “What unites us is a desire to do our absolute best to improve this community we call home.”

As a council, Ferguson said the group will not waver in its desire to move beyond ward versus ward, the north versus the south in 2019 and this turnover marks a fresh start and a chance to “put those days behind us.”

To that end, a full-day bus tour undertaken during orientation to the corners of the county in a session that was both informative and revealing  allowed councillors to see first-hand some of the assets, challenges and heritage of the municipality.

One of the assets the mayor indicated would be the envy of any neighbouring municipality is the spirit of co-operation and dedication amongst one of Prince Edward County’s most valuable resources, its volunteer base.

Ferguson spoke of efforts to save Sophiasburgh Central School and rehabilitate the Millennium Trail as just some instances where volunteers identified an issue that needed swift action and engaged leaders and a corps of workers emerged to make magic happen.

“These success stories are just a couple of examples of collaborative problem solving that we want to facilitate more and more over the next four years,” Ferguson said. “Volunteers working together with council and municipal staff to develop creative ways to achieve their goals and dreams: that’s what it’s all about.”

While any levee is a chance to toast what has transpired, Ferguson also took the opportunity to envision at the upcoming term and what will be realized in the next four years.

For starters, the hard and tireless efforts of the Prince Edward District Women’s Institute will serve the community well as their pioneering ground work has lead the way to a new public transit plan and business case that was unveiled in 2018 and, over the next four years, the municipality will work with its many partners to implement the plan in order to enhance mobility options for residents, employers, and visitors.

Getting around as geographically sprawling a municipality as Prince Edward County is just one obstacle some county residents face but another more serious and far reaching issue is the lack of affordable and attainable housing.

The mayor said providing sufficient affordable housing is increasingly challenging for our municipality and many others across Ontario.

“The municipality took a step in the right direction last year with the creation of the Prince Edward County Housing Corporation,” Ferguson said. “The independent, not-for-profit corporation has a mandate to increase the supply of affordable housing through a broad range of activities and, in the coming weeks, we will appoint several qualified individuals to serve on the board of the corporation.”

Once these skilled and experienced individuals are appointed Ferguson said it will be time to roll up the sleeves and get to work.

“We won’t solve this challenge overnight however it’s vital that we start to make progress if we are to ensure the short and long-term economic and social well-being of our community,” Ferguson added.

Protecting and promoting the character and quality of existing residential neighbourhoods through new regulations governing the location and operation of short-term accommodations, retail sales of cannabis within the municipality’s boundaries, the 2019 budget and infrastructure renewal will be issues waiting to test the resolve of the new council in the first quarter of 2019.

On the topic of roads and water, Ferguson said the growing infrastructure investment needs have outpaced available funding, a reality faced by municipalities across Ontario. 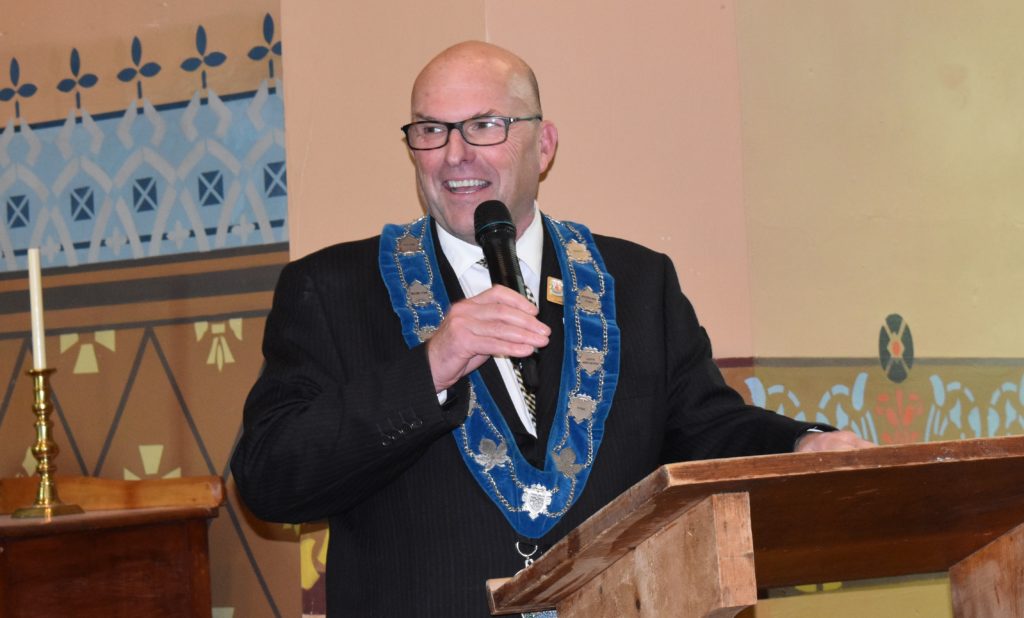 “In addition to advocating for additional funding from upper levels of government, we intend in 2019 to take a hard look at how we manage these assets so that we can continue to deliver affordable and sustainable services for generations,” Ferguson added.

While the municipality must invest in assets it’s responsible for, council is increasingly called upon to support other major projects in the community- the most prominent of these being the Prince Edward County Memorial Hospital redevelopment.

“I am extremely proud to have been a member of the previous council that recognized the importance of having a new hospital in our community and committed $4.5 million toward the redevelopment,” Ferguson said.

While municipal support has been easy to source during the ramp up process prior to shovels getting into the ground at the PECMH redevelopment site, Ferguson made a special point of mentioning provincial promises made in 2018 that the new hospital would be coming to Picton with Bay of Quinte MPP Todd Smith in attendance on Sunday.

“We expect that provincial support will continue, knowing how much of a supporter Minister Smith has been for a new hospital in Prince Edward County,” Ferguson said. “I know he understands just how important a new hospital is for this community, and I look forward to working with him as well as our partners at Quinte Healthcare, Prince Edward Family Health Team, the South East LHIN, the Hospital Foundation, and the Hospital Auxiliary to continue moving this project forward in 2019.”

In the coming weeks, Ferguson said the new council will embark on its own goal setting exercise and while some of the priorities will still be relevant and carry over, he expects there will be other areas council will want to focus on during our term of office.

A sustainable future for the agricultural community-particularly new or young or in need farmers; protection of the environment and taking steps to deal with global warming; importantly, making sure youth – in other words, our future – have resources and opportunities available to them; and that poverty in Prince Edward County becomes a thing of the past.

“We will look to you, the public, to help inform the priorities by which we will measure ourselves in the coming years and we welcome your input. Have your say. But please don’t stop there. Get involved by applying to serve on an advisory board or committee: respond to the advertisements now running,” Ferguson said. “We need to tap into our greatest asset: the deep pool of expertise and experience in this county. A diversity of voices around the decision-making table is a strength and not a risk to be avoided.”