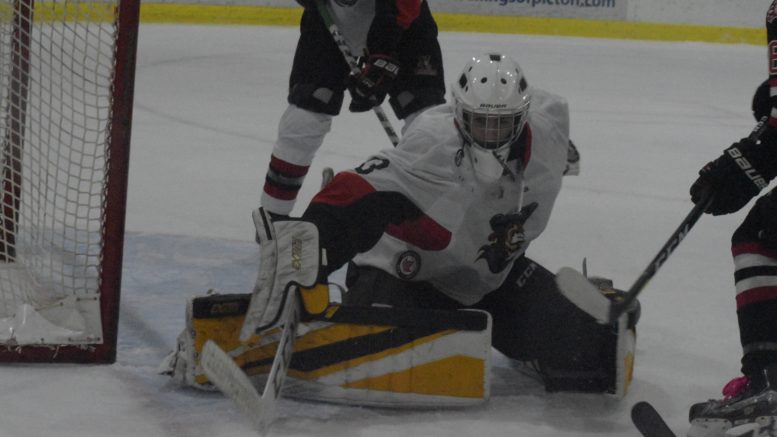 KEEPER KYLE- Picton Pirates netminder Kyle Renaud didn't allow an even strength goal over 120 minutes of play this weekend to help his team to a pair of wins. (Jason Parks/Gazette Staff)

If there was one team in the Tod Division of the Provincial Junior Hockey League that was more than happy to see the end of 2018, it was likely the Picton Pirates.

The Pirates skidded to the end of the calendar with three straight losses but have righted the ship since the first day of 2019, winning three in a row and reasserting themselves as the second place title holders in the division with a 22-11-1 record.

With their recent spate of wins including a 4-1 victory over host Amherstview on Sunday night, Picton now leads the third place Jets by a handful of points with ten contests left in the regular season.

“We were really happy to turn the page,” Picton Pirates bench boss Ty Green told the Gazette Monday. “Heading into the weekend (the losing streak) was in back of the minds of the players but going forward we knew what we were capable of and it seemed like a new group of player in the dressing room after Thursday night.”

Picton welcomed Clarington to Huff Estates Arena Thursday for a game that saw an interesting wrinkle as the Eagles went with former Picton netminder Kyle McNair.

The Corbyville native was traded from Picton just prior to Christmas and made his second start in a Clarington sweater.

Picton would test their former teammate time and again in the opening frame as they outshot the visitors 23-7 in the first 20 minutes but the frame ended without a goal being scored.

After outshooting opponents regularly during their three game slide and having precious little to show for it, a lesser team might have gone off the rails after a scoreless first period.

“The message was not to get frustrated and keep doing all the little things that make goals happen,” Green said of his intermission tete-et-tete with his charges.

“We were getting those second and third opportunities off rebounds and we wanted to continue that pattern because we know we are successful when that happens,” he said.

In the second, some veteran presence came through for Picton.

Devin Morrison would set up Noah Brant just 55 seconds into the frame to give the Pirates a 1-0 edge.

Later in the period, it was a role reversal as Brant would feed the captain for his 16th of the campaign.

Hulking blueliner Matt Scott picked up assist on both Pirates goals in the second.

“Those players obviously bring a veteran presence to the lineup every night and when you need something to happen, they are the ones that have been there before,” Green said. “Players like Noah Brant, Devin Morrison and Griffen Conger know what it takes to produce in this league and they just stepped up and took the team on their backs.”

Picton backstop Kyle Renaud took a shutout bid into the final three minutes of the contest only to have Clarington’s Jordan Neuman spoil the goose egg with a goal with 93 seconds left.

Up 2-1, Picton’s Landon McLellan would score with 38 seconds left to make it a 3-1 final

Renaud would make 31 stops for Picton in securing his second win of the season.

On Saturday, Picton had a somewhat easy time of it in Campbellford, drubbing the woeful Rebels 8-2. 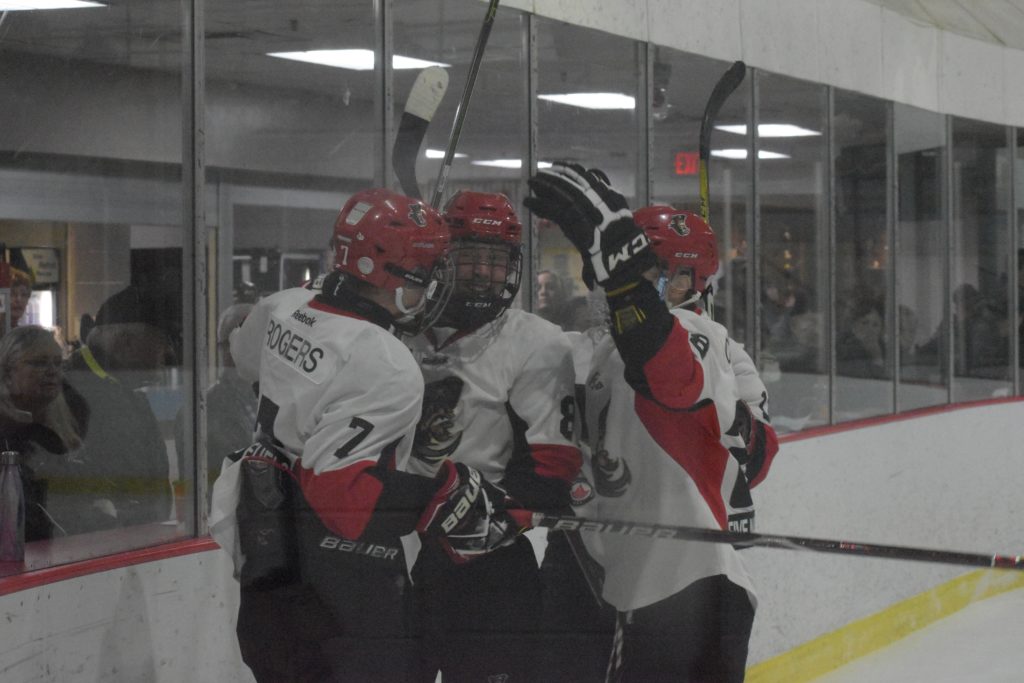 Picton starter Brennan Bush made 31 saves for his 13th win of the season.

The wins set up a vital four point game in Amherstview on Sunday filled with tension.

After scoreless first period and Andrew Lumb turning back every shot Picton threw at the Jets net, the locals might have been having flash backs to two weeks prior where the same situation played out to a 6-0 win by the hosts.

“It was kind of setting up to go the same way but we stayed composed and kept working for the break we knew was eventually coming,” Green said.

That break came in the final minute of the second when veteran blueliner Kurtis Wood zapped home his first of the season to give the visitors a 1-0 edge after 40 minutes.

The Bloomfield native’s marker was his first since Dec. 9, 2016 and the first goal Lumb surrendered to the Pirates in over 100 minutes of action dating back to November.

On the road and playing their second game in as many nights, Picton might have been given a pass if there was a let down in the third period but the club continued to flex in the final frame.

Tallies by Logan White and Justin Arnold in the first half of the third period made it a 3-0 spread.

With the goalie pulled and Amherstview on the powerplay, Jet Joey Mayer would solve Renaud for the host’s first of the night at 13:43.

But that goal was answered by a Picton powerplay marker at the 15:40 mark of the third off the stick of Derek Vos.

Brant would set up the goal and that gave the Tyendinaga resident eight points (four goals and four assists) in three games over the weekend.

Renaud was outstanding in the Picton net, making 41 saves and rebounding nicely after the Jets hung six goals on the native on Dec. 23, 2018.

“(Renaud) was great and he’s really fitting in nicely,” Green said. “We are very happy with what we have in net right now with him and Bush. It’s a really solid tandem.”

Picton will travel to Napanee on Friday to do battle with the host Raiders and the travel east to Gananoque on Sunday.

The game will be sponsored by County councillor Bill Roberts and the theme will be supporting community, youth and amateur sports in Prince Edward County.