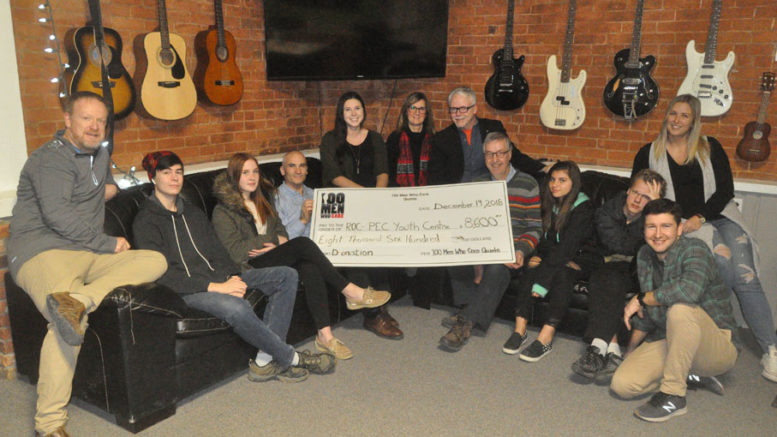 The good works of the Recreation Outreach Centre (ROC) and its Prince Edward County Youth Centre caught the attention of a legion of caring men across the Quinte region.

Before Christmas representatives from the 100+ Men Who Care Quinte dropped by the Main Street facility to deliver an $8,600 cheque to assist with programming in the new year.

The charitable group, which meets each quarter to fund a charitable organization in a territory stretching from Brighton to Napanee and from Madoc to Prince Edward County — and has a big concentration of population in Belleville and Quinte West — learned about the ROC from a man who has firsthand knowledge of its impact.

Paul Pickard, a former principal at Queen Elizabeth School and vice-principal at PECI, nominated the centre and offered a brief testimonial of the work it does. He told the Gazette he liked the way the ROC worked in his schools to offer fun learning opportunities in safe spaces.

“In the schools, I saw the work they did to make it OK to grow up,” he said. “It’s about equality and making sure everyone has an opportunity and just the ones that may have enough money to have that opportunity.”

Pickard said he was convinced about the ROC’s programming when he saw that both in schools and at the centre, students chose to give their own time to participate in its elective programs.

“They really like to have that experience, I think.” Pickard said he felt the ROC transcended boundaries and earned the votes of people in larger centres because they were convinced its programs, like those offering life skills, leadership and entrepreneurship training can have a “tangible, lasting impact” on the future success of Prince Edward County youth.

ROC executive director Darlene Thompson said the organization was “thrilled” to receive the windfall, particularly going into the start of a new year.

“This win comes at a great time for us as we go into 2019. We start each year with no guarantees for funding with community donations and one-time grants,” she said. “This is an awesome donation and it will be a huge boost in supporting the youth centre programs and youth in the county.”

More info about the youth centre’s hours and programming is available online at theroc.ca.