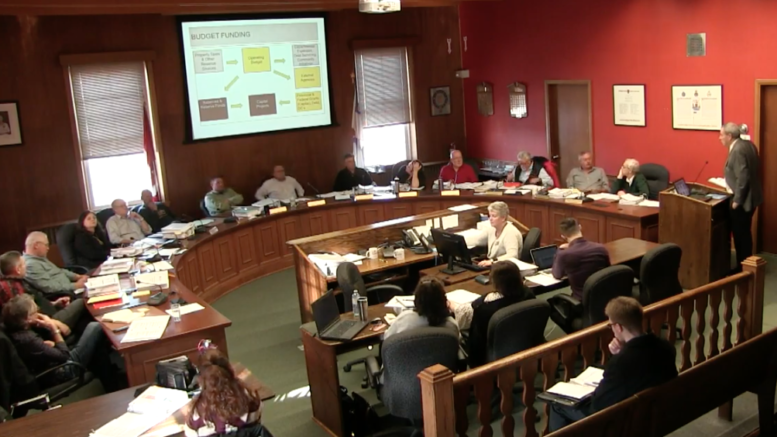 While a new mix of councillors at Shire Hall may be eager to put their spin on municipal governance, staff brought a status quo 2019 operations budget at the start of deliberations this week.

Chief administrative officer James Hepburn provided a high-level overview Monday of a tax-supported $54,455,798 operating budget that requires a levy of $37.245 million, up 5.1 per cent from last year. When factoring in 2018 growth and a phase-in of market value assessment, Hepburn said staff was eyeing a tax increase of 1.6 per  cent over 2019.

He said the public likely won’t notice a lot of change in municipal services.

“We’re maintaining the status quo in terms of service levels. We’re not increasing service levels, but we’re not knowingly decreasing them,” Hepburn told council.  “This budget maintains commitment to affordable housing and other community initiatives. We’ve provided for all the initiatives staff is aware of that this council or the previous council has committed to.”

Hepburn acknowledged it may be difficult for councillors to set priorities in their first budget, but added there is funding included for a strategic planning exercise to start next month that would influence their next three budgets. He also said the municipality engaged consultant last year to update the County’s asset management planning and it has adopted new data-driven software to guide its asset management.

Looking at this year’s budget, however, Hepburn briefed councillors on challenges and opportunities.

Wages and benefits are one factor driving operating budget increases. The municipality’s commitment to internalize additional snow plowing routes will mean an additional 4.5 staff members at a cost of $290,000. There are incremental staffing increases planned at H.J. McFarland Memorial Home to cover vacation entitlements and improve patient care, while staff allocation for maintenance at the County’s museums is also set to increase. Two positions are the planning department will be moved to non-union status with increased benefits to help attract candidates. Unionized workers, represented by the Canadian Union of Public Employees will also see a 1.9-per-cent wage increase effective April 1 and a boost of 50 per cents per hour across the board. Non-union staff members will receive a 2.2-per-cent cost of living increase and some employees in both groups are eligible for step increases in their compensation, based on seniority.

The proposed budget will also include funding to offset a 50-per-cent development charges reduction for serviced areas, money for a regional project to improve cellular service in eastern Ontario, a contribution toward the County’s 15-year commitment to provide $4.5 million for a new Prince Edward County Memorial Hospital, and a continued $250,000 for affordable, attainable housing.  Some $74,000 for needed museum and town hall site repairs will also be included in the operating budget.

The proposed operating budget will transfer more than $5 million to reserves for capital projects, though Hepburn said “Quite frankly, it should be quite a bit more than that.”  While $3.15 million of that is for roads and bridges, Hepburn said the County’s asset management plan suggested it should be spending tens of millions annually to keep up. Transfers from upper levels of government and other funding sources bring the amount council can spend close to $5 million, but there’s still a much greater need.

“It shows how far we have fallen behind and we will continue to fall behind,” Hepburn said. “This isn’t unique to Prince Edward County. All municipalities are facing this issue.  A lot of post-war infrastructure is maturing now. That’s why it’s a problem.”

He suggested the only fix for the infrastructure crisis would be increased funding from upper tiers of government.

In 2019’s proposed $14,291,330 capital budget forecast, the County is planning to spend $8,551,530 on roads. Hepburn said $4.7 million will be transferred from its various capital reserve funds with another $3.9 million coming from development charges. Some capital reserves, he cautioned, have been depleted with certain ones in a deficit position. Hepburn said over the next four years, he’d like to see them get back to net-zero or slightly positive positions.

The development charges money used this year will fund the construction of a new collector road on the west end of Picton, which will bring traffic to the new Sobeys plaza and to a subdivision development north of that.

Also in roads work for 2019, the Talbot Street reconstruction is a major spend with $1,874,000 allocated in 2019. An illuminated sidewalk for County Rd. 22, drainage improvements for Miller Road and Bongard Road, a new forceman for Hill Street, and continuation of the roads surface treatment program, sidewalk construction and reconstruction, and various lighting is included.

The capital forecast includes $1.959 million for vehicles, with the purchase of four tandem axle trucks with winter implements costing $1.16 million. Those will also help with increased winter maintenance tasks. The fire department is poised to purchase a pumper-tanker truck for $360,000. Two service vans and nine light duty vehicles are also being considered.

The County is also poised to spend about $750,000 in building improvements; $850,000 in arena equipment, playgrounds in Comsecon and at Roblin Lake, and for new fire equipment and library collections; and $350,000 to upgrade computer systems.

The commitment to restore and rehabilitate the Millennium Trail was included at a cost of $150,000, while the Northport Centennial Park Boat launch was be improved at a cost of $95,500. Retaining wall improvements at the Mary Street parking lot and on Hill Street are planned, as is an improvement to the Hospital Creek storm pond.

The capital forecast also includes $1,050,000 toward eight studies. They include the Picton East Servicing Study, the transportation master plan, the second phase of the heritage district plan, an official plan review, a downtown parking master study, a parks and recreation master plan, a Picton harbour master drainage plan, and a co-location study.

Sophiasburgh councillor Bill Roberts asked Hepburn if he could offer an “elevator pitch” to sum up his detailed overview.

“We’re maintaining our service levels. I think the funding we’re proposing for a number of community initiatives is extremely important to this community. We’re trying to do that in the most cost-effective manner possible,” he said. “The thing the public needs to know is that we’re going to see infrastructure changes and not positive ones unless we address that issue. That’s the overriding concern we have. If we don’t engage with this problem, that’s the elephant in the room.”

Mayor Steve Ferguson thanked all the councillors for their “enthusiasm and passion” for the budget process and cautioned that council is going to take time to go through the presentation thoroughly and methodically.

“I want to make it clear that everybody is entitled to ask as many questions as they want to ask,” he said, adding he’d like to see all the councillors walk out of the deliberations satisfied with what has taken place.

Hepburn, too, said he expected a fairly lengthy process.

That process continued Monday afternoon and is expected to be ongoing. Asked by Ameliasburgh councillor Janice Maynard about whether there’s a statutory deadline to adopt a tax rate, Hepburn said there wasn’t one, but staff hoped to be able to issue final tax bills June 15. He said the budget would have to be approved by April to meet that target.