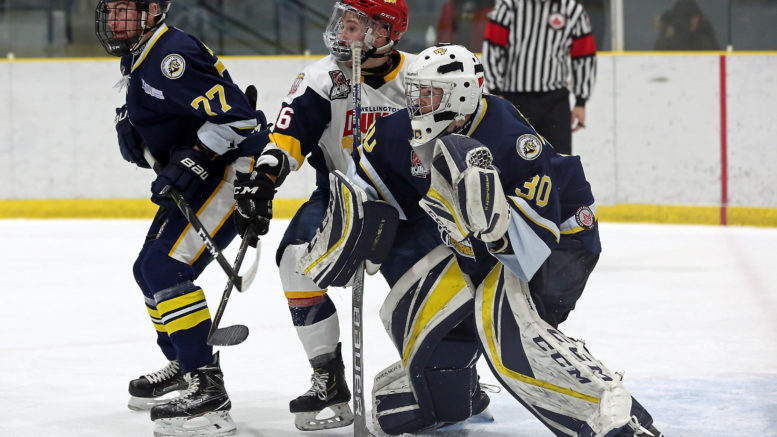 At time when points are at a premium and nearly every team in the Ontario Junior Hockey League is battling to improve their playoff standing, any club would take five out of a possible six points any day of the week.

And while the Wellington Dukes might have let a point get away in their weekend finale, full credit goes to the local Jr. A outfit as they mount a charge in defence of their 2017-18 Eastern Division title.

Wellington (22-17-4) ran their unbeaten in regulation streak to six games on Sunday as they salvaged a regulation tie out of a 4-3 overtime upset at the hands of the visiting Buffalo Jr. Sabres.

Given that Wellington had racked up a pair of wins against opponents Whitby and Georgetown in successive nights and were playing their third game in two-and-a-half days, the Dukes could likely be excused for not being able to answer the bell at Lehigh Arena on Sunday.

Down 3-2 after two, Wellington’s Elijah Gonsalves had the only goal of the third period to secure his club’s 48th point of the season that saw the club climb to within four points of second place Trenton.

The Dukes came out flat to start the contest, giving up goals in the first and the 11th minute to Ty Glover and Nathaniel Burke, respectively, to let Buffalo build a 2-0 lead.

But Wellington came alive in the second half of the frame as a Zach Uens powerplay blast got the Dukes on the board at 14:43.

Just under two minutes later, Picton Pirate call up Logan White tied the game up at 2-2 with his first OJHL tally in just his third game.

In the second, Matthew Novo pushed the visitors ahead 3-2 with under two minutes to go in the frame, setting up Gonsalves’ effort in the third.

On Saturday night, the Dukes were back in Georgetown to face their 2018 Buckland Cup opponents and while Wellington has not exactly set the world on fire in their defence of their OJHL crown, the Raiders under former Wellington bench boss Scott McRory are under .500 this late in a Jr. A season for the first time in many a moon.

After giving up opening goals in both the first and the second periods, Wellington had leads of 2-1 and 4-2 heading into each of the respective intermissions.

In the first, Tyson Gilmour have a pair to answer Matt McJannet’s opening goal.

In the third, shifty Raiders centre Bailey Molella scored a pair within two minutes of each other to bring the game back to square at 4-4.

With the game hanging in the balance, Andrew Rinaldi would feed Frank Vitucci with under three minutes to play to put the Dukes ahead to stay 5-4.

Vittuci would add some insurance via an empty net with 30 seconds left to make it a 6-4 final in favour of Wellington. 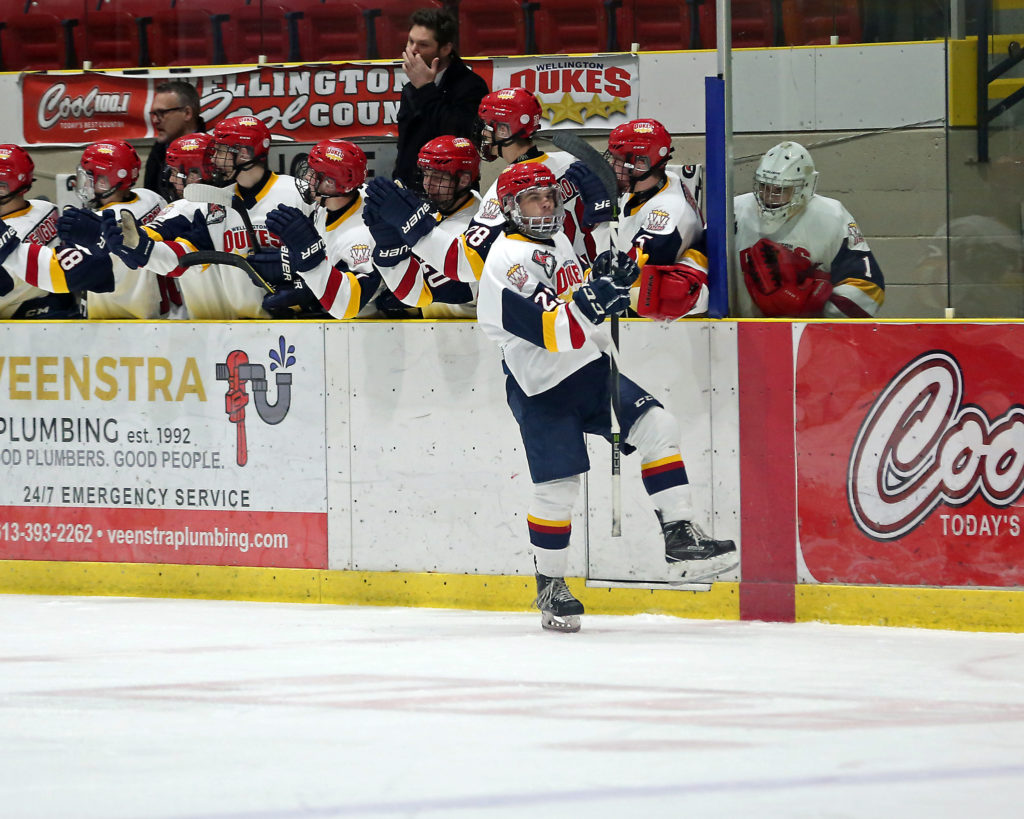 Friday night’s contest against Whitby saw the third place Fury come to Wellington with an idea to put some space between themselves and the Dukes.

But what happened was a goaltending show and a flex of offence and muscle on the part of Wellington that took the Fury out of the game after two periods.

Rinaldi counted a pair of goals while Vitucci and newcomer Jacob Thousand also found the range to chase Whitby starter Luke Pearson as the Dukes lead 4-0 through forty minutes.

The Fury finally managed to slip a puck past Bateman in the third while on a powerplay but the Ottawa native was sound, stopping 37 Whitby volleys en route to a 4-1 win.

Both Dylan Massie and Brett Humberstone doffed the gloves for fights and the instance might have been the first time in five seasons a Jr. A game in Wellington featured two bouts in the same 60 minute time frame.

Wellington, if they have any inkling of making a run to the top of the east, will need to find a way to past visiting Trenton in the Dukes only action this weekend.

Puck drop at Lehigh in the latest instalment of the Battle of Quinte is 7:30 p.m.