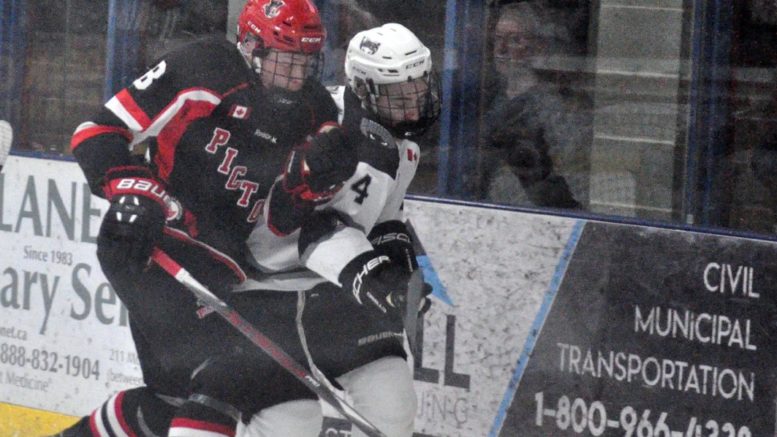 Looking at the seasonal trends the Picton Pirates have developed over the 2018-19 Provincial Junior Hockey League campaign, a record of one win and one loss over a pair of road games this past weekend wasn’t completely unexpected.

After all, the club had struggled against Napanee so far this season and had yet to beat the Raiders while Picton was carrying a perfect 3-0-0 record into their Sunday night game in Gananoque.

Well, a funny thing happened this weekend although the Pirates would struggle to find the humour in it.

Picton did something on Friday they hadn’t almost two years to the day that’s beat the Napanee Raiders at home.

Picton got a game winning powerplay goal in the third period off the stick of former Raider Griffen Conger and hung on to take the contest 4-3.

But the Pirates were unable to keep the momentum rolling on Sunday as the host Islanders snapped a four game win streak with 5-3 victory.

The loss dropped Picton’s record to 23-12-1 which is good enough for second place and a five point spread on the Amherstview Jets.

The Jets have a game in hand and have nine left in their schedule compared to Picton’s eight.

The clubs still play each other twice (one game in Picton and one game in Amherstview) so the playoff picture remains murky.

Pirates bench boss Ty Green said that while it was nice to win in Napanee and get the monkey off Picton back in terms of proving to the club and the rest of the league they could beat the Raiders, the weekend was a mixed bag due to the let down in Gananoque.

“We were thrilled with Friday night’s effort and everyone buying into the defensive side of things but then Sunday we get into some selfish stuff and some selfish penalties that we haven’t seen since the earlier part of the season,” Green said.

Considering the monumental feat of beating the Raiders at the Strathcona Paper Centre Friday couched with losing to the fifth place Islanders two nights later, there was no denying the disappointment in Green’s voice as he spoke with the Gazette.

Picton was looking for a emotional win on Friday night and, despite surrendering the game’s first goal and being outshot 18-8 in the opening 20, the locals went into the intermission with a 2-1 lead.

After Napanee’s Jacob Gilbert opened the scoring at the 10:10 mark, Picton defenceman Kurtis Wood bagged his second of the year as his effort snuck past Raider netminder Nicholas Nabuurs just 68 seconds later.

With just under five minutes left in the frame, Jack Dow pushed the Pirates ahead with his first tally since early November.

In the second, Picton again gave up the first of the period when former Wellington Duke Justynn Steven scored 1:47 in to make it 2-2. 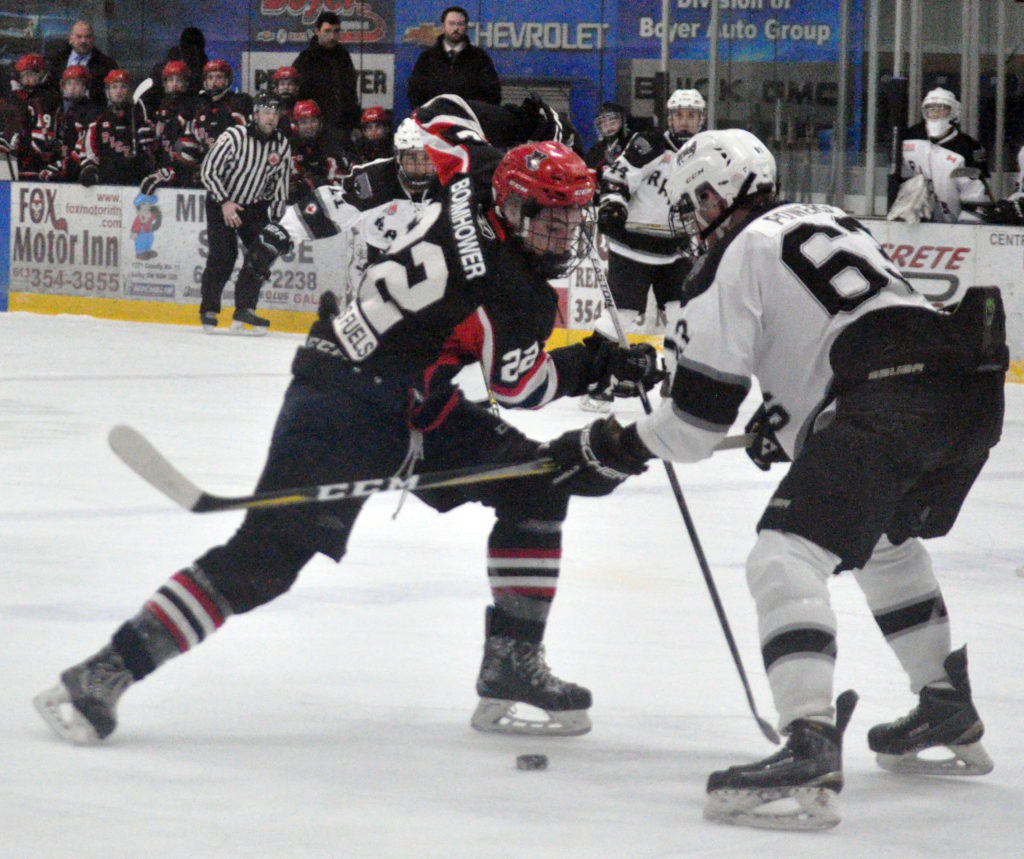 But the Pirates were keeping stride with the Raiders and Nate Boomhower made a triumphant return to the lineup by scoring a goal midway through the frame and making it a one goal lead in favour of the visitors.

“It was great to have him back,we’ve certainly missed that big body in the lineup,” Green said.

In the third, the Raiders would out shoot Picton 11-5 but one of those Picton volleys was off the stick of Conger as Landon McLellan fed the former Raider on the powerplay at 9:36 to make it 4-2 for the Pirates.

Green said that Conger is a PJHL veteran that takes pride in his game and comes prepared ever night.

But admitted that it was a big goal for the forward that was jettisoned by the Raiders prior to the start of the season.

“I know he approaches it as another game but you can tell he gets up for these,” Green added.

Former Pirate Austin Labelle would make it interesting by scoring with under four minutes left by Pirates starter Kyle Renaud was outstanding all night, making 39 stops including a few big ones in the final minutes to preserve a 4-3 win.

“He was outstanding for sure,” said Green.

On Sunday, Picton once again gave up the games first goal only to come roaring back and hold a 2-1 lead after the opening stanza.

Nick Kyte and McLellan both lit the lamp to give the visitors a 2-1 edge.

But in the second, the Islanders started to mix it up physical and Picton couldn’t contain its emotions.

“We let the emotions get the best of us and the team started to worry about some other thing other than what was in front of them,” Green said.

A 2-1 lead was quickly turned into a 3-2 deficit after Nick Malliet beat Picton starter Brennan Bush twice in under 90 seconds.

In the third, an Eric Labrie powerplay goal just over a minute in gave the Isles a lead they wouldn’t surrender.

After Gananoque made it a 5-2 game, a Noah Brant goal got Picton to within a pair but that was as close as the Pirates would get on Sunday.

The club hosts Port Hope on Thursday evening in its only action this week.

The contest is sponsored by Councillor Bill Roberts and is dedicated to youth and amateur sport in Prince Edward County.