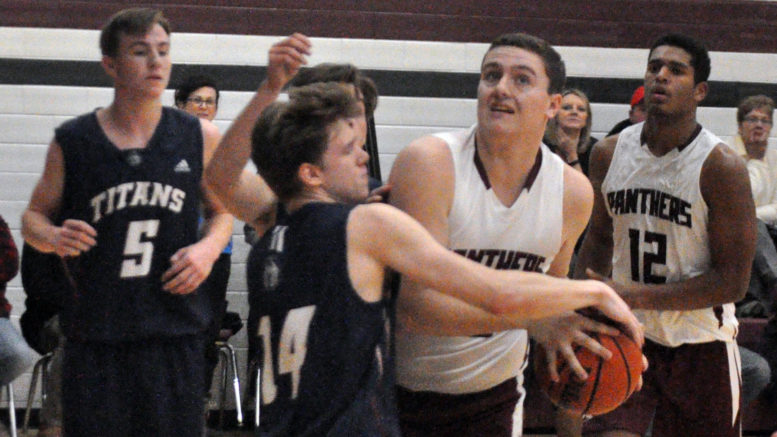 PECI struggles to close out win after great first quarter

In an all-out battle where emotions ran high, the cool confidence of Devon Wilton at the foul line delivered the PECI Senior Basketball a one-point win over St. Theresa Thursday.

The Panthers looked as if they’d walk away with the battle of the Bay of Quinte Conference’s two unbeaten teams at home after a 26-point first quarter, but in the end they had to come from behind to get to a point where Wilton would sink two shots with six seconds left in a 57-56 decision. “Devon showed a lot of toughness. He came off and I think he got charley horsed there pretty bad with about three minutes left. We need him out there, he’s a huge part. I had to be a bit mean. I told him to suck it up and he came up big for us,” said coach Taylor Reddick. “I don’t think he’s worried about that charley horse right now.”

PECI came out fired up as they fed centre Brodie Byford for 12 of his team-high 18 points in the first eight minutes. According to Reddick, the Panthers applied more pressure than the Titans might have seen so far in their league season. He said the visitors might not have expected it.

“The pressure really isn’t in your face, but it puts them in a position where they had to make decisions. They were struggling with decision making in the first half but they’re a good team, they’re well coached and have a lot of guys who have played good basketball. You just knew it wasn’t going to be that easy for the whole ride.”

Indeed, it wasn’t. The Titans closed the gap to seven points by half and had the game neck-and-neck by the third quarter. St. Theresa brought some marquee scorers to the match-up and they delivered. Aden Callaghan had 19 points, Jaxen Reid added 15. Bailey Maracle added 13, including four baskets in the fourth quarter. Reddick was a bit disappointed in the way his team defended them, though the Panthers did have Byford and Alex Arsenault in foul trouble early on.

“They had guys who were going to score and we had to do a better job of limiting that and making them uncomfortable,” Reddick said. “A team like that can make you pay sometimes.”

The Panthers relied on their own depth. They cycled players into the game when needed and cut down the bench when necessary. Unsung heroes, like exchange student Owen Wang, emerged.

Wang put in some real energy to lead the rush and he drained an important basket in the dying minutes.

“Owen is a bit of a gift we got this year. He definitely loves playing basketball. He came up in the middle of the game and literally begged me to put him in. I don’t necessarily like guys stepping up too much, but at the same time, it’s showing me you want to play in a game like that,” Reddick said. “Some guys with limited experience might shy away. Owen stepped up with a big bucket down the stretch, moved the ball well and did a lot of good things for us today.” Though Thursday’s game featured the top two teams in the conference, Reddick said he’d been stressing to his players the importance of not overhyping it. He said it’s one step in a journey.

“Our goal is to get to OFSAA. We want to win the Bay of Quinte and COSSA as well to show we deserve to be there, not that we just got lucky one night. We want to be the team to beat.”

Thus far, through five games, the five-year Panthers standout says he likes the way his team is working toward those goals.

“We’ve got a good inside presence and  we’ve got some guys who can come off the bench to shoot the ball and run our offence. I can look down the bench and be absolutely comfortable with 13 guys,” he said. “Still, we’re a long way from the Bay of Quinte, COSSA, and OFSAA. We’re just taking baby steps from here.”

The Panthers will play at Nicholson today at 5:30 p.m. They still have Eastside, East Northumberland, and Centennial ahead before the end of the regular season.