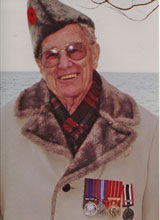 Albert “Wilkie” Wilkinson passed away peacefully at Prince Edward County Memorial Hospital on Thursday, January 10, 2019 at 95 years of age. A WW2 Veteran, he served his country in the Royal Canadian Air Force for over 25 years before retiring to his home in Wellington in 1967. He is survived by his wife, Ada, a loving partner for over 75 years, by his devoted daughter Beverly Skidmore and by his son-in-law Don, by his children of affection, Doug and Donna Trimble, and by his sister, Joyce Garner. He also leaves behind many caring nieces and nephews. He lived a wonderful full and active life and both family and friends will sadly miss this exceptional soul. Good times were always had whenever he was around. A celebration of his life will be held at the Picton Golf and Country Club on Saturday, January 19th from 2 to 4pm with tributes at 2:30pm. If desired, Wilkie had two favourite charities, The Salvation Army of Prince Edward County and Covenant House in Toronto which cares for homeless children.