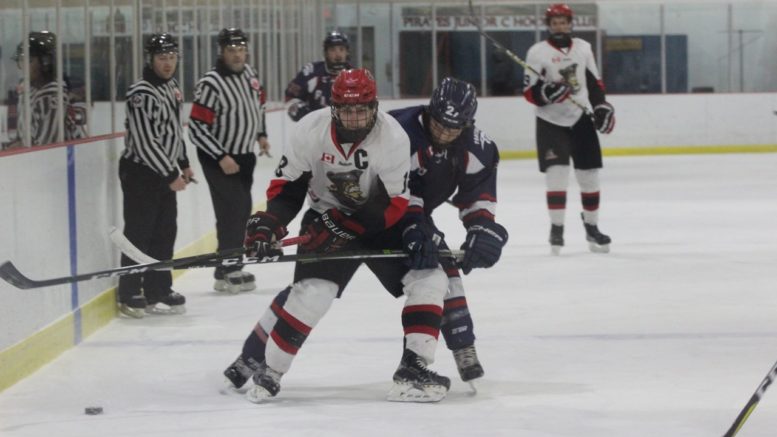 It could be labeled gritty or gutty or clutch or key.

But whatever the descriptor, the Picton Pirates 2-1 win over the Port Hope Panthers on Thursday night was much needed.

With just one game on the slate this weekend for the local Provincial Junior Hockey League outfit, not gaining the full compliment of points available to them against the fourth place Cats would have been a bitter pill to swallow.

But a third period goal, a great goaltending display and an answer to the physicality posed by the visiting team Thursday evening at Huff Estates Arena are all the makings of nice recuperating weekend.

And with the Amherstview Jets now seven points back of the second place holding Pirates, the victory provides the locals with a modicum of breathing space.

“That was a job we needed to get done and we are happy to be walking out of here tonight with two points,” Pirates coach Ty Green told the Gazette after Thursday’s game.

Picton wound up putting 41 shots to the Port Hope net and only a miraculous body of work by Panthers netminder Ethan Robertson kept the game as close as even partway through the third period.

Robertson had stymied Picton earlier this season including making 37 stops in his club’s 3-1 win on De. 29, 2018 so the Pirates could be forgiven if they felt like they had seen this movie before.

They certainly didn’t like the ending and were bound to change it.

“The chances were there but we just weren’t finishing them,” Green added. “If were are not getting those type of chances, that’s when we start to worry.”
After a scoreless and physical first period, Picton drew first blood in the early part of the second off the rush.

Justin Arnold picked up the puck at his own blueline and led a nice rush into the Port Hope zone, making a smart drop pass to Logan White.

White, who picked up a goal with the Wellington Dukes in Ontario Junior Hockey League action last weekend, ripped a shot to the short side which Robertson got a piece of.

The puck managed to have enough momentum to trickle over the goal line and stake Picton to a 1-0 lead at the 2:23 mark of the second.

Later in the frame, Port Hope leading scorer Corey Saman got his team back to even with a nice effort past Picton starter Kyle Renaud to make it 1-1.

The game stayed that way into the third when it was somewhat of a surprising scorer that would lift the hosts to victory.

Of an extended play in the Port Hope zone, defenceman Matthew Scott decided to take a lap with the puck behind the Panthers net.

Eaton quickly lifted the puck to the top of the Panthers net, bouncing the puck off the mask of Robertson to add insult to injury.

Eaton started the season off on the blueline for the Pirates but had found a valuable role in Green’s lineup as a forechecking winger that can exact a physical toll on the other side’s defensive corps.

“Tye’s played up there the last handful of of games and done a decent job for us,” Green said. “He’s a bigger body that goes to the dirty areas and does a job.”

And perhaps contribute on the score sheet as well.

In his last five games, Eaton has a pair of goals and assist and the Pirates are 4-1 in that span. 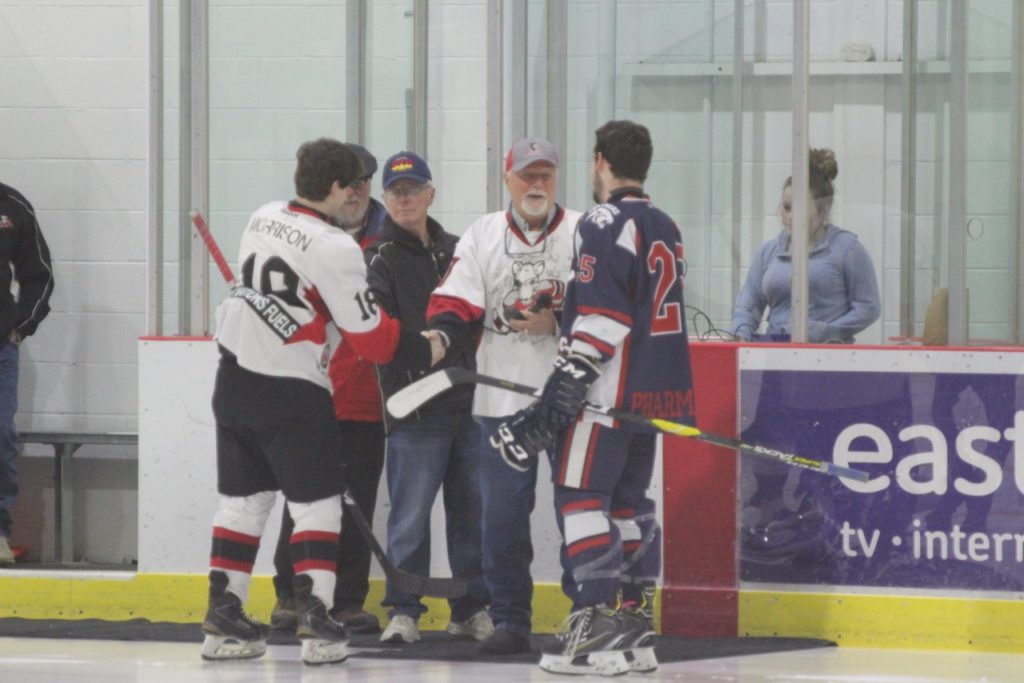 Renaud made 20 stops in the victory, his fifth win of the season.

Not tested often, the Woodlawn native had to reach into his bag of leather bound tricks a couple of times in the final ten minutes to ensure Port Hope didn’t score an equalizer.

“Once again, he was very solid for us back there and it’s a nice comfort zone to have when things aren’t going our way in the offensive zone,” Green added.

The clubs stirred up in the couple of minutes with face washes and jawing sessions, a carryover from the previous game as well as a desperate Port Hope team that are being challenged by Gananoque for the final Tod division playoff spot.

“IT’s just two teams desperate for points and there was some of that the last time we played,” Green said.

The coach added that while Picton was off after Thursday’s game, a contest somewhere between now and next Thursday wouldn’t have been the worst thing in the world considering it was the first place Raiders blowing into town Jan. 24.

“I think it would be nice to have a game between now and then but it’s not a big issue,” Green added. “A little rest this time of year is never a bad thing.”
On Board with the Pirates: Green said for the first time since November the club was able to ice a complete lineup on Thursday with no injured players sitting in the stands…Thursday’s game was sponsored by councillor Bill Roberts and the Sophiasburgh representative was joined on the ice by past council members Jim Dunlop and Gord Fox. Roberts spoke to the community value of teams like the Pirates and the importance of youth sports and similar pursuits in Prince Edward County.