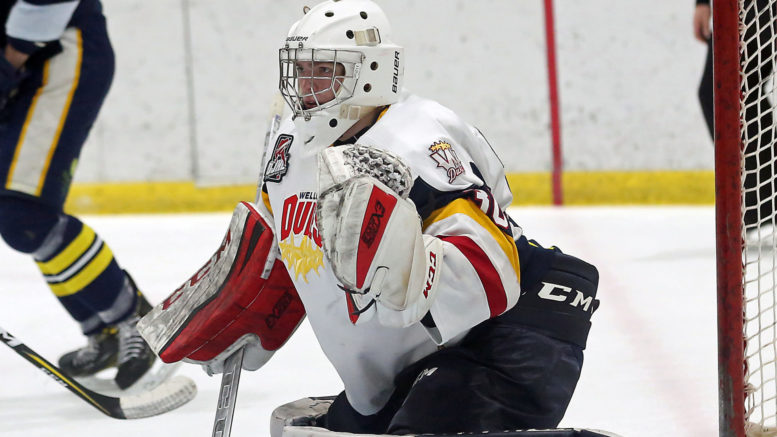 The team has emerged from the holiday break refreshed and renewed, reeling off points in seven straight games which includes the club’s latest victory, a 4-2 win over the visiting Trenton Golden Hawks on Friday evening.

Wellington (23-17-4) have interjected themselves back into the discussion of who will take home top spot in the OJHL’s East division.

While first place Cobourg Cougars and their 55 points as of Monday morning might be a bridge too far for the Dukes, Wellington now trails Whitby and Trenton for second spot by just a pair of points.

The Dukes needed a comeback and a happy hop or two of the puck but they continued their trend of dominance on Friday, beating Trenton for a fourth consecutive time this season on Friday night.

After opening the Battle of Highway 33 with a tie back on Fri. Sept 28, 2018, Wellington has taken nine of a possible ten points from their arch rival.

Dukes bench boss John Druce was hard pressed to explain why Wellington has had Trenton’s number this season.

“I think when we play we show a little more committment than we have against some of the other teams we’ve played against,” Druce said, adding that the games have been incredibly close thanks to a well structured Trenton club. “I thought they played really well and it was a well fought game. (Head Coach) Tom Milne does a great job coaching them, they play tight hockey and they don’t give you a lot.”

Wellington was in a battle all night on Friday, a large portion of it up hill.

A bad turnover to newly acquired Trenton sniper Ted Davis behind the Wellington net just 2:37 into the contest allowed the former Brantford 99er to bank it into the Dukes net off a prone Logan Bateman for a 1-0 lead.

That margin lasted just 61 seconds though as Wellington responded and it was Frank Vitucci collecting a Tim Fallowfield blast that went wide of the net and caromed to the near side of the Trenton cage.

Vitucci knifed a backhand to the short side of Benjamin Allard-Robitaille to even the score at 1-1.

The teams played nearly a scoreless second but it would be Trenton forging ahead inside the final minute and it was Davis thrilling the travelling Trenton faithful with just 46 seconds left, banking a beautiful effort off the far post past Bateman’s glove.

Wellington responded quickly in the third with a powerplay goal.

With the puck bouncing in the high slot, Kennan Eddy chopped the biscuit toward the Trenton net and it took a bounce off of Vitucci and past Allard-Robitaille at 2:22.

The 2-2 score didn’t last long and the eventual game winner was painful to watch if you were sitting on or near the Trenton bench.

Just three and half minutes after they tied it, the trio of Vitucci, Eddy and Ben Woodhouse struck again.

Woodhouse would take a pass in the high slot and rip a shot to the Trenton net.

Allard-Robitaille would make a nice stop on the effort and sent the rebound skyward.

Attempting clear the airborne puck with a whack of his goal stick, the Trenton goalie would wind up batting it into his own net, making the score 3-2 at the 5:54 mark of the third.

Wellington was able to grind down the Golden Hawks in the final stanza, surrendering only eight Trenton volleys all of which Bateman successfully stopped.

With just 17 seconds left, Wellington defender Brett Humberstone put the puck into a vacated Trenton net to make it a 4-2 final.

Wellington’s current roll might have something to do with awareness.

Druce said the squad knows where it is in the OJHL Northeastern Conference standings and what’s left of the schedule.

He added the team seems to be fresher and more committed after a three week break during the holidays.

I feel like we are a little fresher team,” Druce said., Our attitude and atmosphere is good in the room, they want to play for one another a little more than we did before the break.”

Bateman has been a stalwart since coming over in a trade from the Nepean Raiders just after New Year’s.

The Ottawa native has complied a 5-0-1 record since starting his Wellington Dukes career and has put up a .918 save percentage and a 2.65 goals against average.

“What’s impressed me so far is his composure and he’s been a breath of fresh air in the room,” Druce said. “He’s been very patient and focused I hadn’t seen much of him before he arrived but he’s done an admirable job.”

After just a single game this weekend, Wellington will face a pretty significant gauntlet next weekend.

After travelling to Kingston to play what will be a desperate Voyageurs club on Thursday, Wellington will welcome top rated Oakville on Friday night.

On Sunday, Wellington head to Whitby for a huge four point East division match up and then cap off the weekend with a Monday night visit of division leading Cobourg.