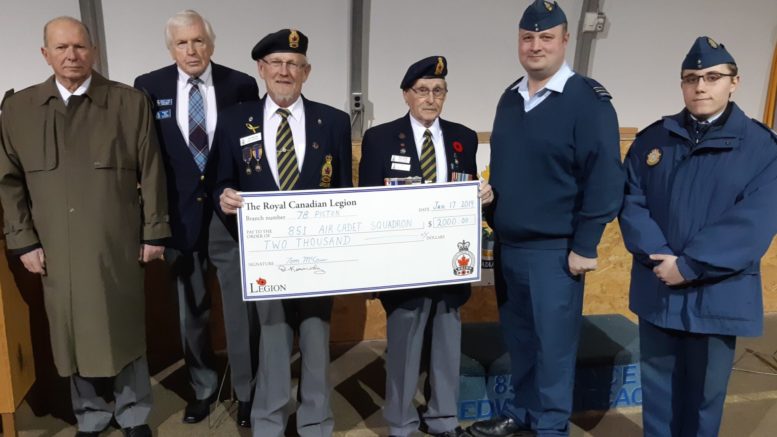 The 851 Prince Edward Air Cadet Squadron is getting some help from the local Legion.

On Thursday at a weekly meeting of the cadet corps, the Royal Canadian Legion Branch 78 presented a cheque to the squadron in the amount of $2,000 to help support training.

“These funds will help us in furthering the training of our cadets and secure supplies for the various activities we undertake,” 851 administration officer Mike Campbell told the Gazette. “It’s a very substantial donation by our local legion and they’ve gone above and beyond.”
Campbell said the 851 squad and Branch 78 have always enjoyed a special bond between its memberships.

With 40 cadets enlisted this year, the squadron has strived to maintain a level of community service that includes volunteering with Legion poppy sales.

In addition to assisting the Legion, the 851 squad pitched in to staff Salvation Army kettles this holiday season and is committed to assisting Glenwood Cemetery with a spring clean up.

“In the spring of 2018, there was a lot of limbs that were down and the pine cones needed to be cleaned up so we helped with that. We are also committed to working the Trash Bash this spring and cleaning up a portion of roadways,” Campbell added.

Recently, Air Cadet command paid a visit to the squadron grounds at the Macaulay Mountain Quinte Conservation offices and the Air Cadet controllers were complimentary in their review of where hundreds of Air Cadets will attend this summer for survival training.

“We appreciate the continued good relationship we have with Quinte Conservation,” Campbell added.