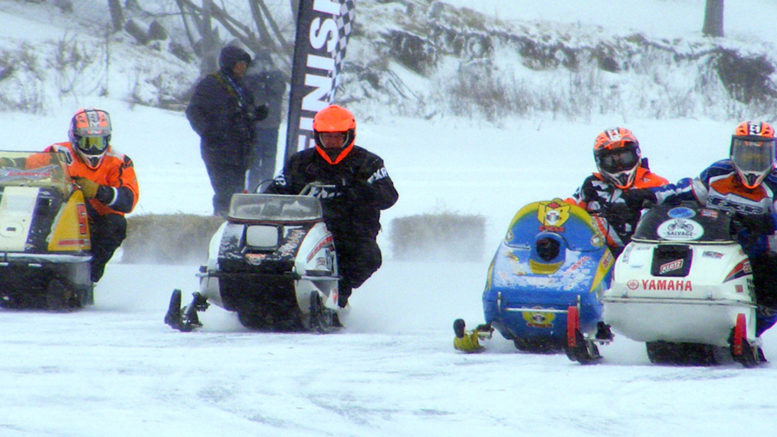 Ready to roar - A group of racers approach the start line as they get ready to compete in during the Sand Dunes Cup, a series of races run by the Ontario Snowmobile Oval Racers on the ice at the Isaiah Tubbs Resort and Conference Centre on Saturday. Organizers had planned for two days of racing on West Lake, but extreme cold and high winds led them to cancel Sunday’s competition. (Terry McNamee/For The Gazette)

Snowmobilers live for winter, but Sunday proved just a little too wintery for even the most dedicated sled racers on the Jan. 19-20 weekend at West Lake.

The Ontario Snowmobile Oval Racers kicked off their ice racing season by holding the Sand Dunes Cup, a series of races on the ice at Isaiah Tubbs, but after fighting the weather on Saturday, organizers made the tough decision to cancel Sunday’s event.

“Unfortunately, the winds were blowing and causing drifting.” explained OSOR founding member and race organizer Rick Greenfield. “The racers voted on it after we discussed it.”

However, racers are undeterred, he said.

“It was a very good start to the season, and we want to come back next year with a little better weather,” Greenfield said.

The group held its year-end banquet at Isaiah Tubbs in 2018, but this was the first time the group has held races at West Lake.

The planned weekend event attracted several hundred competitors who came to race snowmobiles and ATVs. Greenfield said the event attracted people from northern Ontario and even from as far away as Pennsylvania and New York.

Rounding the corner -Adam Minnie throws up a spray of snow as he heads into a turn to win his ATV race on Saturday, during the Sand Dunes Cup at Isaiah Tubbs Resort. (Terry McNamee/For The Gazette)

Some of the winners during Saturday’s races included the following:

The OSOR, now in its third season, is holding races across Ontario every weekend in January, February and March. Races are divided into a large number of classes for a wide variety of machines and different age divisions and for different levels of experience. Some racers come just for one weekend or even just for one day, while others compete regularly to accumulate points toward year-end awards. The next stop on the circuit is the Polar Bear Cup in Cochrane on Jan. 26-27. The full schedule is posted on the OSOR web site at www.osor.ca. The OSOR currently has more than 2,900 members, and anyone interested in vintage ice oval racing is welcome to join. Sponsors also are encouraged to get involved.

For more information, e-mail osorgroup@hotmail.com or visit the website. There is also a Facebook page for Ontario Snowmobile Oval Racers.