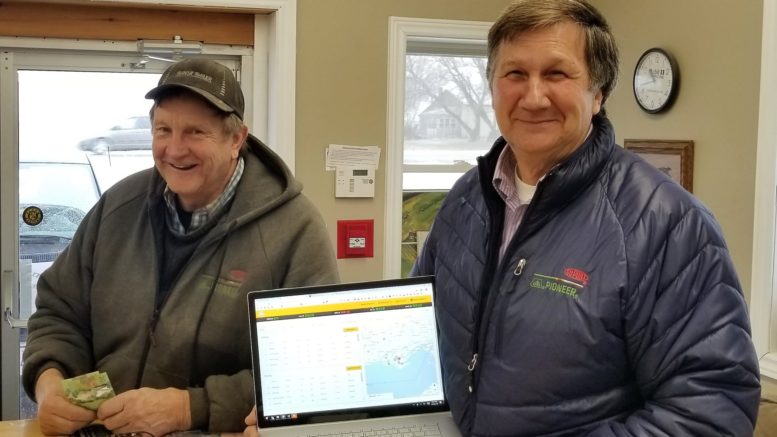 A NEW DISCOVERY- (From left) Larry Reynolds and Lloyd Crowe of Reynolds Farms used Grain Discovery to sell a load of corn in late December, a first for the online application that was developed in part by a local man. (Submitted Photo)

A local grain and corn grower became the first farm in the world to sell a load of corn through an emerging blockchain-based technology that could become the Amazon or eBay of commodity trading.

Native Australian and soon-to-be Prince Edward County resident Rory O’Sullivan has been involved in the grain industry his whole life from being brought up on a grain farm to being the ex head of agricultural commodity trading desk at Canadian Pension Plan.

Grain Discovery works by simplifying and enhancing the connection between sellers and buyers through a transparent online exchange that takes advantage of the latest blockchain technology.

“It’s 2019 and on one side, agricultural technology is travelling at warp speed-The seed, the fertilizer, the machinery and farmers are consistently producing a bigger and better crop,” O’Sullivan told the Gazette.

What’s typically been static since the practice of agriculture began however is the marketing side.

With the Chicago Board of Trade futures market a relatively transparent method of booking crops in the spring, there’s still an underneath cash market out there for farmers with product over and above their booked yields.

But the processes can be murky and fraught with unknowns and complicated logistics for grain farmers.

Grain Discovery looks to simplify and enhance the connection between sellers and buyers through a transparent online exchange that takes advantage of the latest blockchain technology and processes payment to the grower instantly.

“The cash market is infamously opaque as large conglomerates and intermediaries have benefited from this at the expense of farmers and consumers worldwide,” O’Sullivan said. “Farmers have been price takers for too long and our aim is to level the playing field by creating an online exchange that allows farmers and mid-tier companies to connect directly with both domestic and overseas buyers.”

With a more engaged end-consumer base, one of the key marketing tactics in agriculture is provenance data.

When this data is lost it means a value premium is being extracted. The desire for consumer engagement and awareness is at an all-time high (i.e. organic, non-gm, single origin, sustainable palm oil, fair trade etc) according to O’Sullivan.

“Blockchain has the added benefit of “farm to fork” traceability, with our smart contracts embedded in the immutable ledger recording provenance. This enables the commodity to have a digital passport proving its authenticity and source of origin as it moves through the supply chain. So now, regions/farms can be individually branded and therefore extract a premium by moving away from the commoditization of their product,” O’Sullivan added.

The concept of an online exchange matching the bid and the offer isn’t new in the developing online marketplace, however the Grain Discovery competitive advantage lies with escrow, settlement, title transfer, provenance and overall security all on the blockchain.

“This differentiates Grain Discovery from all other exchanges in the world and delivers benefits to a broad group of stakeholders,” added O’Sullivan.

While O’Sullivan expects the full scale North American release of Grain Discovery by the fall of 2019, the application has already netted a sale for Reynolds Farms of Picton.

On Dec. 24, 2018, following the unexpected rejection of two loads of corn, tested on-site to be just over the threshold for vomitoxin – a toxin produced by mould that has damaged much of Ontario’s corn harvest – Prince Edward County farmers Larry Reynolds and Lloyd Crowe used the Grain Discovery platform to find a new local buyer, confirm the trade and receive payment instantly.

“By using Grain Discovery, we were not only able to avoid hours of searching for a new buyer, but found one just down the road, at a better price than the original deal and we were paid instantly,” said Larry Reynolds.

Grain Discovery is focused on untangling the complicated supply chain paths for grains and the platform gives more control to both farmers and buyers and has endless applications, from allowing consumers to see the path their food travelled, to calculating the carbon intensity behind the production of food and biofuels.

“We are participating in a number of other pilot projects this year, including tracing soybeans from seeds in Canada to the export market in Japan and coffee from Columbia to your local café,” said Mr. O’Sullivan. “This transaction was the vital first step towards realizing our goals.”

“If blockchain technology means a few extra dollars in my pocket and a few hours less trucking, then that’s a win,” Reynolds said.