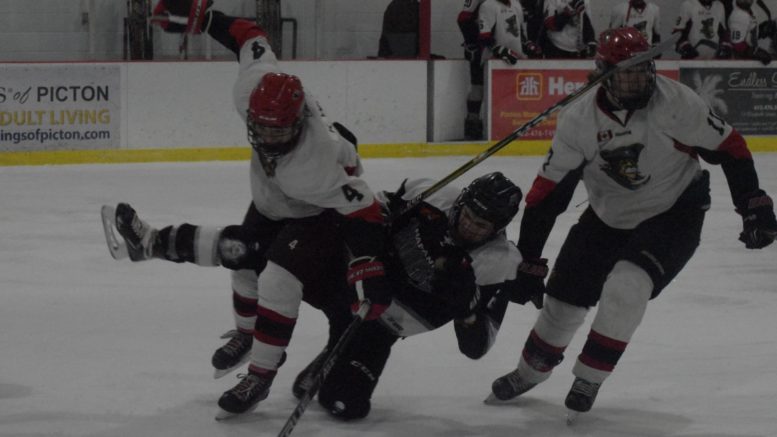 The proof the Picton Pirates are a team on the rise and starting to be aware of their place in the hierarchy of the Provincial Junior Hockey League didn’t come when they defeated the Napanee Raiders 1-0 on home ice on Thursday.

No, the burden (at least to the eyes of this corner) was satisfied Saturday evening in Gananoque against a vastly improved Islanders club desperately trying to snatch the final Tod Division playoff spot from the fourth place Port Hope Panthers.

On the road and down a pair inside the final five minutes of the contest, Picton (25-12-2) mounted a mighty comeback and managed to even the game at 4-4 with Landon McLellan lighting the lamp with the goalie pulled and just 19 seconds left on the clock. 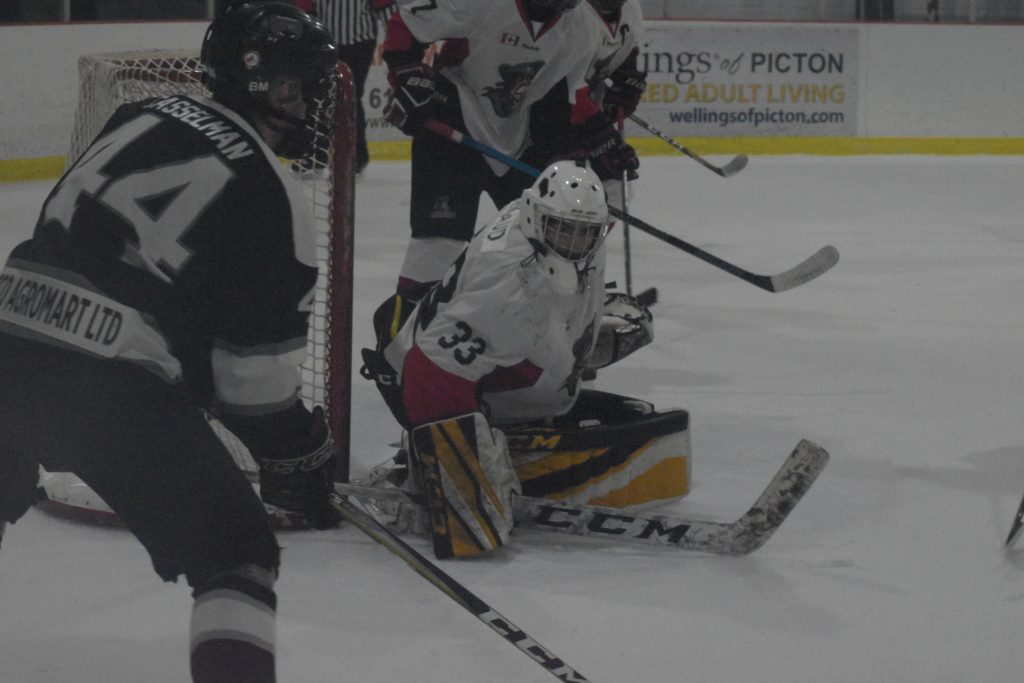 A young upstart team that believes in itself and is ready to knock on the doors of the best in the PJHL…hmm, where have Pirates fans seen something like that before?

“Early on in the year, we weren’t sure where we stood next to a team like Napanee who was designated as the team to beat,” Masterson said. “The difficulty we were faced with is that, outside of Campbellford, we are the youngest team in the division and we needed to get the guys to believe they were as good as we thought they were.”

Masterson said the last two games against Napanee, both wins, prove that Picton can hang with the best of the PJHL and the opportunity for post season glory could  present itself.

Two weeks ago, Picton went into Napanee and downed the Raiders 4-3 in a loss which was just Napanee’s second home setback of the season.

Picton would follow that game up with a loss in Gananoque in a game that proved on any given night, any team can win in the PJHL.

“This time, there was a message that we can’t afford to throw away the hard work of Thursday night’s game,” Masterson said.

On Saturday, the Isles would strike first and lead 1-0 after the opening 20 minutes but the Pirates would use the powerplay early in the second to come alive.

Afforded a two man advantage, Picton’s Logan White would beat Gananoque starter Cameron Parr at 5:53 to get Picton on even terms with the hosts 1-1.

The Pirates would again click on the powerplay with McLellan scoring his first of two goals on the night at 7:49.

Masterson said the club is enthused by the play of the 17-year-old Shannonville native who stands second in team scoring with 21 goals and 19 helpers for 40 points in 39 games this season.

“He started out penalty kill but he’s only recently been moved to the powerplay so the majority of his points this season (32) have come even strength or the powerplay,” Masterson said. “He’s also on the line that gets matched with the top line of the opposition so he’s really solid defensively.”

Unfortunately for Picton, Gananoque would get the next three goals including Kyle Casford’s second of the contest to take a 4-2 lead through the halfway point of the third period.

With time running down and Picton in danger of replicating their folly from two weeks ago, the Pirates dug deep.

Justin Arnold would pick up his first goal and third point of the game with 2:28 left to go in the contest.

“Justin started the season playing well but he hasn’t’ contributed as much offensively as maybe he would have liked to but he’s really starting to use that next level speed to his advantage and good things are happening,” Masterson added.

With time winding down, it was Arnold with his fourth point of the game coming by way of a nice pass to McLellan that set up the valuable game tying goal and allowed the Pirates to escape the land of a thousand islands with a road point.

Picton out shoot the Isles in overtime 7-4 but neither Parr not Picton starter Kyle Renaud let a puck get past them. 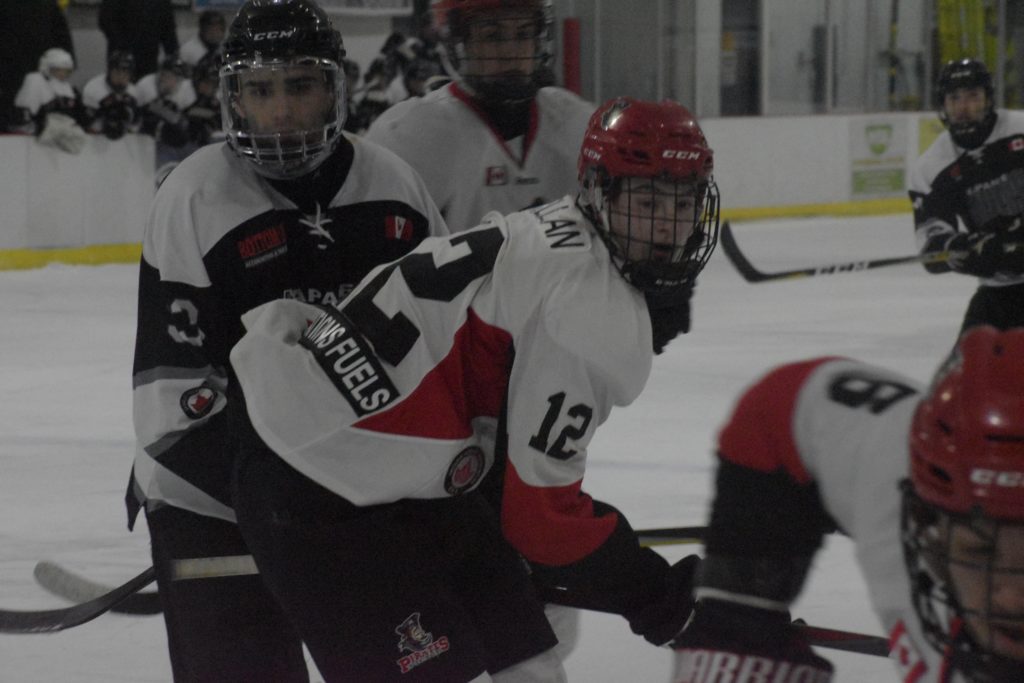 Renaud and the club’s hard work and attention to detail was plainly evident in Picton’s 1-0 win over the visiting Raiders on Thursday.

Picton’s Will Harrison would tip a White shot past Raiders netminder Nicholas Nabuurs at the 11:22 mark of the first and that marker would stand up as the winner.

Renaud made 17 saves in the third en route of a 34 save shutout, his first in a Picton uniform since coming to the Pirates from the Smiths Falls Bears of the Central Canada Hockey League.

“It was probably our best opening period of the season and even though they pressed us hard in the second and the third, I thought defensively we didn’t give up a whole lot,” Masterson said. “Kyle was there whenever he needed to be but I thought we didn’t gave up a lot of grade A scoring chanced in the 17 shots we had against in the third.”

With three of a possible four points gained over the weekend, Picton can cement their second place status through the rest of the regular season on Thursday night when they host third place Amherstview.

The Jets trail Picton by eight points and each have a handful of games left in the 2018-19 campaign.

On Board with the Pirates: Picton’s shutout of Napanee was the first time the Raiders have been blanked since March of 2017 when the club was playing Port Hope in the Tod Division finals…As pointed out by Sportsgate Kingston, the last time a PJHL game ended in a 1-0 decision was back in 2009-10 when the loop was branded the Empire Jr. C Hockey League and netminder Jory Fuller backstopped his Port Hope Panthers to a single goal win over the Frontenac Flyers.