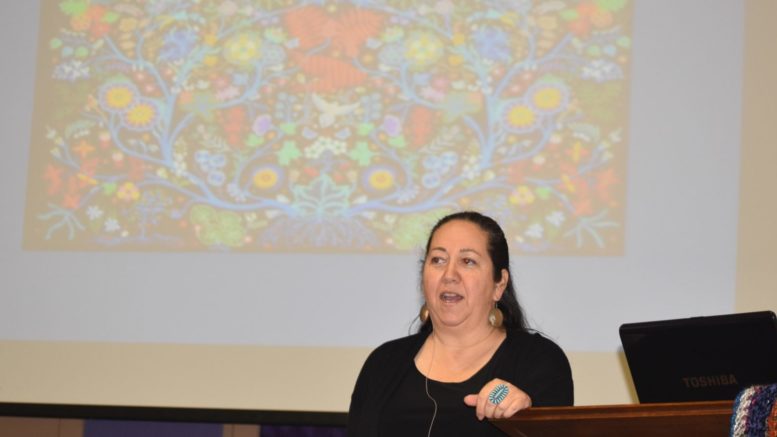 SEEKING WISDOM- Metis visual artist and creator of the Wisdom of the Universe Christi Belcourt was at St. Andrew's Presbyterian Church in Picton on Saturday. (Jason Parks/Gazette Staff)

The artist who created the piece of art that adorns the rear exterior wall of St. Andrews Presbyterian Church was at the sanctuary on Saturday afternoon in a meet and greet session which included members of the church’s circle of friends joined with members of the Mohawks of the Bay of Quinte.

Christi Belcourt, a Metis visual artist whose Wisdom of the Universe adorns the exterior wall of St. Andrews in mural form, was at the church this weekend to speak about her craft, her connection to the earth, her inspiration and meet with supporters.

The event was well attended with 80 people shaking off the cold and circling the chairs in the sanctuary to create a place of warmth and understanding.

Welcomed by Longhouse leader Jan Hill with a traditional Mohawk welcoming complete with a sage smudging, the spirit of friendship and connection inside the church was undeniable.

“I have been moved, from the very beginning of this journey, by the profound generosity of those Indigenous people who have responded to our reaching out,” St. Andrew’s Reverend Lynne Donovan told the Gazette. “From Christi Belcourt’s gift of art, to the artists from Tyendinaga who joined us in October to Jan Hill from the Longhouse who welcomed Christi on Saturday. It was wonderful that Christi’s visit brought our two communities together and we will move forward with humility as we nurture this new narrative.”

Fee will offerings, sales of prints that were used in the stencilling and mural application undertaken by Jason Roleau and MuralForm as well as collections form St. Andrew’s parishioners totalled $3,800 and those funds were donated to the Onaman Collective, a group of three Indigenous artists including Belcourt,  Isaac Murdoch and Erin Konsmo who love the land, believe in the spirits of the land and believe in the resilience and beauty of their people. 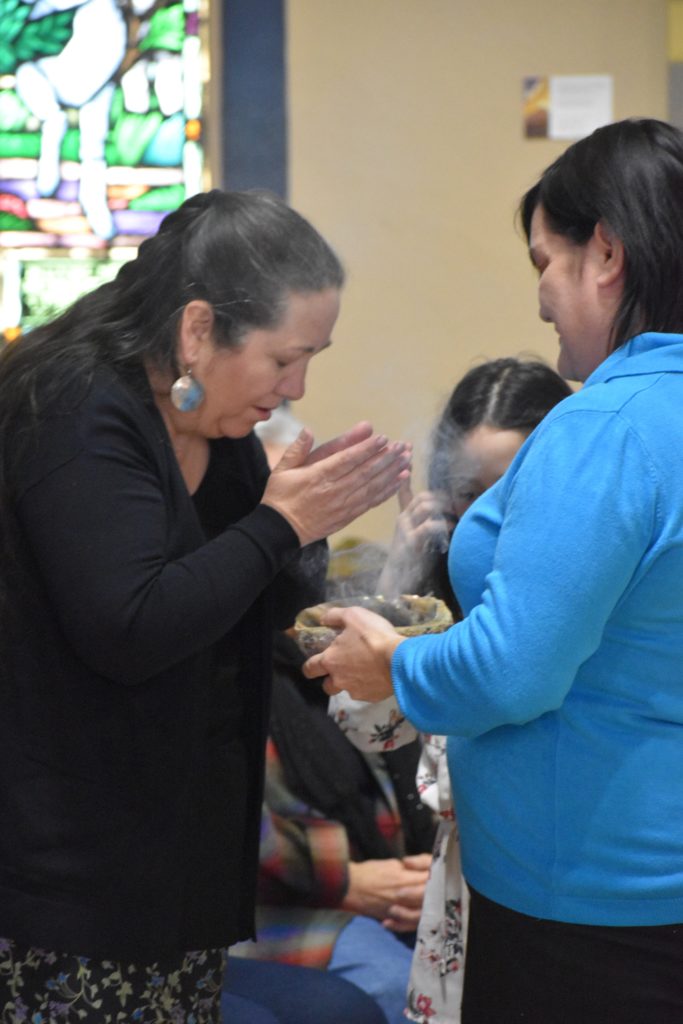 The Onaman Collective is a community based social arts and justice organization interested in helping Indigenous communities, particularly youth, reclaim the richness and vibrancy of their heritage including traditional arts, but with a contemporary spin.

Among the projects the Collective has undertaken since forming in 2014 include workshops, canoe building, school murals and an ongoing fund for the creation of a year-round traditional camp that specializes in indigenous art and language preservation.

In accepting the funds, Belcourt said she was overwhelmed by the generosity of the community and the people of the region and was also deeply appreciative for Hill’s welcoming and all of the indigenous languages.

The visit by Belcourt allowed the Wisdom of the Universe project to come full circle but it’s simply an opening chapter in a reconciliation dialogue the church wishes to be ongoing.

Donovan agreed there would need to be many more steps, both small and large, taken over the next years and generations but Saturday’s event was undeniably one of them.

“For the past decade we at St. Andrews’ have sought to live out a vision of inclusivity, generosity and, going back, to ask ourselves hard questions about identity,” Donovan explained.

A circle of friends with a collective set of ancient and shared values that are set in the Christian tradition but prevalent in a number of other traditions, Donovan said the group understood it had work to do if they wanted to live more deeply in those values and needed to examine “who do we need to include in this circle next and how do we grow our heart.”

Originally the church was planning to put a piece of Celtic art on the exterior wall but Donovan said the time was right to expand and think beyond what was traditional.

“It’s time we opened this door and we hope we are ready to open it with humility and recognition of the history,” she said. “We can’t just run over the bridge and say, ‘Hey, want to be friends?’ How do you undertake this with humility?”

In early fall, after the Wisdom of the Universe project had been finalized, St. Andrews reached out to its neighbours next door and invited them to be a part of services in the month of October.

“We had Mohawk spoken and smudging at three of four services that month and the process was started with humility. I want to say we started planting seeds of healing but it will have to be a generational process,” Donovan added.

Belcourt said there were common threads in her work and one of them was the slow evolution of the earth away from how the Creator placed everything.

“When you look around the world now, you see the destruction and see the hate that is growing,” Belcourt said. “I think of the laws of creation and we need to go back and let the earth and waters govern us as it always has been from the beginning of time. We need to walk softly, respect the fish, the soil, the grasses and the trees and the water because it’s a blessing to life.”

Belcourt said there are gifts given by the Creator and “How we choose to use those gifts for the betterment of the community and the whole world is really up to us.”

Another gift is language and Belcourt spoke of where her family originally came from which is Lac. St. Anne, AB.

But her people know the lands as Manitou Saskhigan and keeping these names is vital to keeping Indigenous language alive.

“Every single place in Turtle Island which is North America, has original names and we have names for the these places and they are sacred to all Indigenous people,” Belcourt explained. “It is normal in the process of colonization to erase these names so we are in a constant struggle keep and preserve original names of places.”

The path to a greater inclusivity and understanding at St. Andrews will take another step forward on Sat. Feb. 9 when Laura Maracle will facilitate the Kairos Blanket Exercise.

A unique, participatory history lesson that was developed in collaboration with Indigenous Elders, knowledge keepers and educators, the exercise fosters truth, understanding, respect and reconciliation among Indigenous and non-indigenous peoples.

“It’s a chance to come and learn a little bit more about how the history of this country called Canada unfolded in a way that most of us are not aware,” Donovan said. “The blankets used in the presentation represent the lands and it shows who started on the blankets and who ends up without the blankets.

The event takes place at the Church and starts at 2 p.m.