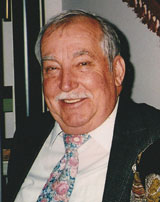 Graham Cluer Ferguson Steers
October 22, 1932 – January 26, 2019
Beloved husband of late Jean Adele Steers. Dearly missed by his children, Bentley, Peterborough, Julie Miller (Deb Hedges), Picton and Jeffrey (Michelle), Barrie. Cherished grandfather of Aaron Miller (Dominique), Oliver, Helena, Holly, Katelyn and Patrick Steers. Predeceased by parents Albert and Mary (nee Ferguson) Steers. Beloved uncle, brother-in-law and cousin. Many valued friends, including his family of friends, staff and management at the Kingsdale Chateau and most recently, The Rosewood Retirement Home. Growing up an only child, Graham’s fierce independence led him to solitary passions. Much of his free time was spent restoring, riding, or displaying his vintage British motorcycles: whether at home, during a local parade or at a Bike Show. He loved working with his hands and this was evident in the quality craftsman-ship shown through his wood carvings: especially his many bird carvings for which he received accolades. Graham had a love of the water where he, Jean and the kids would spend many summers at their cottage boating and fishing. This love has been passed to his children and grandchildren. A Union member for 67 years, 17 years of it as a Union Rep, Graham was a strong believer in worker’s rights. He was a Crane Operator from 1950 – 1977 and a union rep with The International Union of Operating Engineers from 1977 – 1994. Graham loved his family how he lived his life: passionately, unfaltering, whole-heartedly. The Family will receive friends at the Wartman Funeral Home – Kingston Chapel, 980 Collins Bay Road Kingston on Wednesday, January 30th, 2019 from 6:00 pm to 8:00 pm. Funeral Service in the Chapel on Thursday, January 31st, 2019 at 11:00am, reception to follow. Donations by cheque to Martha’s Table, Kingston will be gratefully accepted. Online condolences at www.wartmanfuneralhome@sympatico.ca