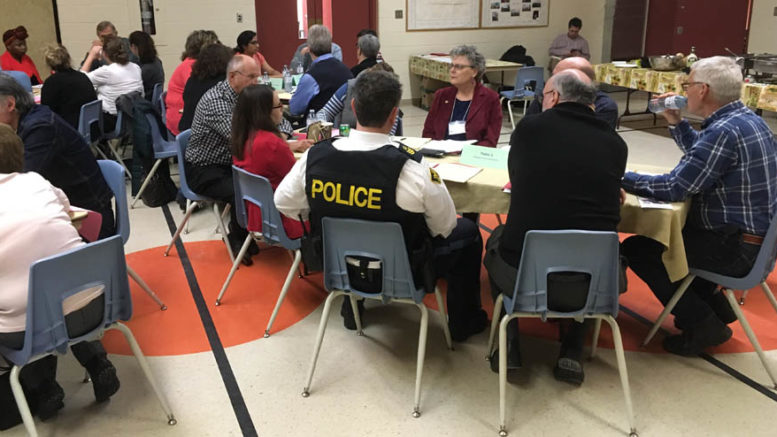 Shared responsibility- A mix of municipal councillors, staff, and representatives from social agencies and services gathered at Picton’s Salvation Army Monday to talk about how Prince Edward and Lennox and Addington will deal with issues related to housing and homelessness over the next five years. (Adam Bramburger/Gazette staff)

Prince Edward-Lennox and Addington Social Services (PELASS) is striking while the iron is hot.

With homelessness and the need for affordable housing hot button topics in both the counties it serves, the agency found a good time to consult on its plans in policy area for the next five years.

On Monday at Picton’s Salvation Army citadel, the agency conducted the second of two visioning days on the subject. The first was held in Lennox and Addington County last November.

PELASS housing manager Annette Keogh said the agency completed a long-term plan in 2014, then received a provincial mandate to update it.

Keogh said the process got a good start in November that helped shape the conversation for Monday. She found the discussion was productive yet again. “The community is really engaged on affordable housing issues. The timing is right, I think,” she said. “ We’re going to be greedy. We actually want all the ideas we can get. We have to write a plan that encompasses short-term solutions right to long-term commitments — from an emergency shelter to home ownership.”

Following the sessions, Keogh said a plan will be drafted for review by both councils and the province and then implemented.  That will mean more consultation with agencies that work on the front lines of the social impact of precarious housing.

“That’s when the work starts,” Keogh said. “We’ll have more of these where we talk about how we get from Point A to Point B.”

Greater Napanee Mayor Marg Isbester, a former PELASS committee chair, was among those attending the session. She said with an aging population in the region, there’s a great need for affordable, accessible housing, making decisions over the next five years extremely important. She also said the issue of homelessness and its ties to mental health, health-care, and other community services is often at front-of-mind.

“Things change and we need to have a plan to go forward. We’re trying to find a direction that’s going to work these next five years.” Isbester said that planning is particularly tough for municipal officials this year because the new provincial government is trying to find its footing, which creates some uncertainty, at the same time the federal government is preparing for an election this fall. The outcome could have an impact on National Housing Strategy funding that municipalities are awaiting. That said, she found the sessions useful for councillors from both counties and PELASS staff to gather information to shape plans for the foreseeable future.

“You could feel a lot of energy in that room. There’s a lot of passion and a lot of care.”

“This is fantastic from my perspective,” he said. “I want to sit (and listen) at all of these tables. This affects us as a community and as police, and it affects our community safety and wellbeing plan… We want to make our community safer and help these people.”