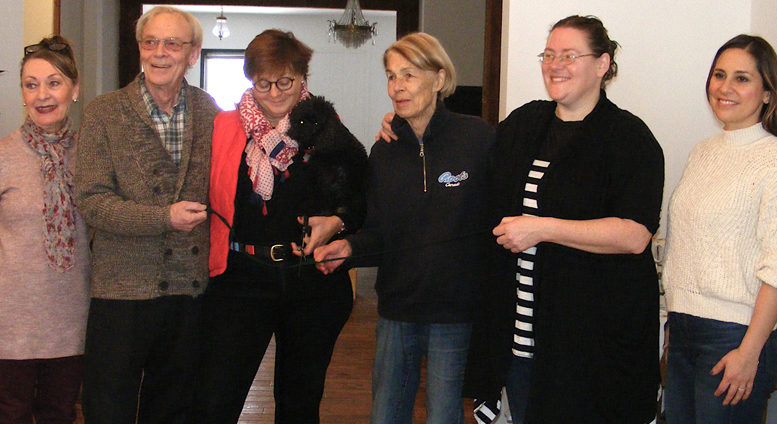 A quick snip of a ribbon marked the official opening of the County of Prince Edward Public Library’s newest fundraising venture: a pop-up gift shop located just a few doors down from the Picton branch at 188 Main St.

Mayor Steve Ferguson was there to present a gift bag containing books, toys, games and more to Tyler Lester and Lindsay Machelle of Bloomfield and their two boys, 7-year-old Easton and Gilby, age 4. They won second place in the library’s family literacy contest. Easton liked the games and books, while Gilby was captivated by the recorder.

Sweet said the new pop-up shop is selling books, puzzles, musical albums, jewelry and some artwork, plus mugs and shirts with various library motifs. Bake noted that It has taken a year of planning to make the shop a reality, with help from Yeager, who is providing the space.

Where is the money going?

“We’re fundraising for an extension for the library,” Sweet said. “Everything we sell goes to the $2-million expansion fund. We’re three-quarters of the way there. We’re over $1.5-million.”

Sweet said the project to increase the size of the 110-year-old Carnegie library is at the stage where studies and background work are being done. The finished project will include an expanded computer area and library space, meeting rooms and an auditorium that will seat about 90 people. As well, the possibility of including an art gallery is being considered, she said.

The Picton Library Pop-Up Shop is open from 10 a.m. to 4 p.m., seven days a week. For more information about the library expansion project, go to www.peclibrary.org/expansion.