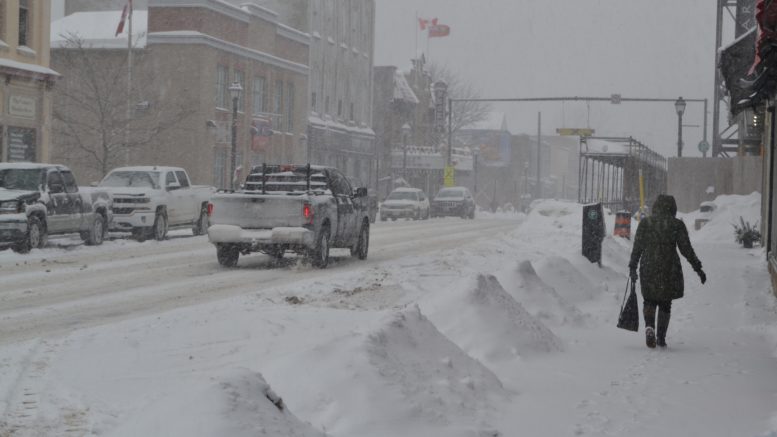 Stormy conditions caused the municipality to declare a significant weather event on Tuesday and cancel a number of meetings. (Jason Parks/Gazette Staff)

Old man winter continued his unrelenting assault on Prince Edward County Tuesday and forced the municipality to alter its operations.

After reviewing Environment Canada’s regional weather alerts and observing the current weather conditions, the County of Prince Edward declared a significant weather event in the municipality and issued a statement calling for residents to “use extra caution as the municipality may not be able to meet its maintenance standards for roads and sidewalks due to the heavy snowfall.”

Environment Canada was forecasting between 25-35 cm of snow to fall between Tuesday and Wednesday.

The forecast of inclement weather caused the cancelation of the regular Council meeting and a the Public Information Centre scheduled for Tuesday.

Prince Edward Mayor Steve Ferguson  called a Special Council Meeting for Thurs, Feb 14 at 4 p.m. at Shire Hall Council to consider the following two items of business that are time sensitive:
• Report of the Finance Department dated February 12, 2019 regarding Issuance of Debentures under OILC Financing Agreement 1344 and associated By-law; and

• A By-law to Authorize the Mayor and Chief Financial Officer/Treasurer to Execute a Letter of Agreement under the Dedicated Gas Tax Funds for Public Transportation Program.

It was also announced by the municipality on Tuesday that the the Public Information Centre for the road reconstruction project reconstruction work on Fairfield Street from Picton Main Street to Hill Street, and Hill Street from Fairfield Street to the sewer pumping station will be rescheduled for a later date. Details will be posted on the County’s website (www.thecounty.ca) and social media (Facebook andTwitter).

In terms of snow plow operations or routes, the declaration will not change how or when the municipality performs its winter maintenance operations. However, it was admitted by the County that it may take the municipality longer than usual to bring the roads back to a state of repair.

·The safety of the public remains a priority for the municipality and every reasonable effort will always be made to meet the winter maintenance service levels and Tthe municipality will update the public when the significant weather event has ended.

Both the Lehigh Arena and the Huff Estates Arena were closed at midday.

The County is asking residents to avoid travel if possible

If motorists had to travel, they are asked to drive according to weather conditions and give snow plows lots of space as they clear the roads.

Please continue to monitor alerts and forecasts posted on the Environment Canada website.