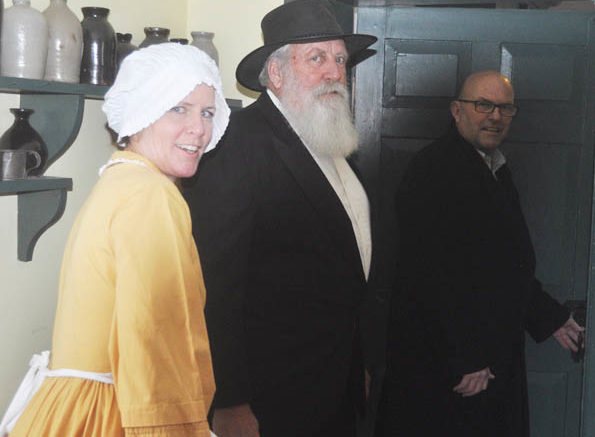 In 1864 Rev. William Macaulay has fallen behind on payments to his servants and they’ve become suspicious of what he is doing with his money.

That’s the message Jane (Suzanne O’Connor) offers as she welcomes a crack team of two-to-six sleuths into the summer kitchen at Macaulay House to help crack the case by finding clues about a hidden treasure.

There’s only an hour to work and — based on learned experience — Macaulay becomes loud and angry when he returns to find people snooping around his home. Can you make it?

The County Museums are inviting the public to take that challenge at Escape Macaulay House, a new challenge opening with the Flashback February Feb. 16-23 for heritage week.

Assistant curator Jessica Chase says at a recent conference, museums staff got the idea to introduce an escape room to provide a new twist on its historic properties after curator Jennifer Lyons heard about a similar venture at Kingston’s Murney Tower. It made sense to bring new audiences.

“The goal was to attract a demographic the museums do not normally get — 20- and 30-somethings,” Chase said. “Initially, we were thinking about whether we should design one that’s family friendly or that little kids could participate in. We love ot have smaller children engaged in our sites, but we already offer a lot of family positive programming. We thought why not do something for a demographic that is underserved in our museums.”

That said, she felt youth aged 10 and up could probably participate with adults or older teens on their teams.

The County Museums contracted London-based Andrew Parr, of New Escape Room Designs (or NERD) to write the actual puzzles for the room.

Chase said the scenario took about a month to write with a lot of back-and-forth e-mails featuring actual family letters, photos, and details of the space to present the challenge.

“The walk-through was ready by mid-December and we spent December to February purchasing items,” Chase said.

Elements of the story, including Macaulay’s tardiness to pay, are historically accurate.

“We’ve tried to incorporate as many truthful bits as we can,” Chase said. “The letters incorporated in the room are truthful. Even if by osmosis people are getting some (local history) before they leave.”

Once locked in the kitchen, the team is tasked with searching for clues and problem solving together without the help of cellphones or outside influence.

They can ask Jane for some assistance — and, those who have been through can’t emphasize the importance of that help enough.

“The moral of the story is ask for help in life,” Mayor Steve Ferguson said after he and a team of two local media members couldn’t beat the clock.

That team won’t be alone, however, as the escape room is designed with an expectation that only 50 per cent of people will get the clues necessary to escape from the historic home.

With that in mind, O’Connor and any future game masters will play a crucial role in delivering an experience that is both fun and authentic.

“It’s really an organic thing. I’m going to learn how to help people,” she said. “You don’t know where people are going to be in the game and where they’ll be stuck. You have to find ways to communicate, even if they are not asking.”

Not only that, the servant has to maintain her accent, move the game along, and not seem like she knows more than a person of her position should.

“You have to steer people in the right direction when they are determined to go the wrong way. You have to find just the right amount of help,” Chase said.

Fortunately, O’Connor is an experienced re-enactor at local museums and she also comes from a theatre background. She added it’s been interested to see the different ways groups approach problems and to see herself in some of the participants.

The escape room is believed to be the first of its kind in Prince Edward County, offering an experience people would have had to travel to Kingston or Belleville for before. Tickets are $25 each, available at visitpec.ca/escape. Chase said the plan is for the room to operate from 11 a.m. to 7:30 p.m. on weekends and continue year-round. There will be some weekday performances this week for Flashback February, so interested parties are asked to check the web site for exact dates and times. Flashback February will feature a full schedule of heritage-themed events at local museums, libraries and businesses.

Among the other highlights this year are a paranormal show Saturday evening at the Regent Theatre; a speech about the Avro Arrow Sunday afternoon at the Milford Town Hall, delivered by Raising the Arrow expedition leader John Burznyski; a local trivia night Thursday and much more. The week concludes with the Prince Edward Heritage Advisory Committee’s annual awards dinner next Saturday at the Bloomfield Public House. For a full schedule of events including times and prices, please visit www.flashbackfebruary.com.