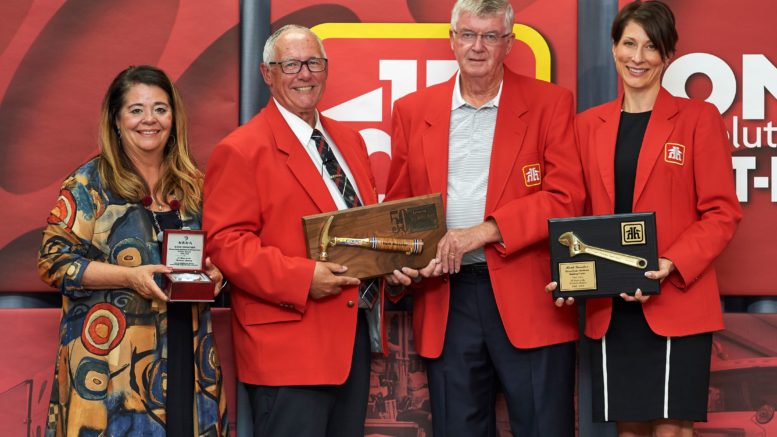 The Busscher family name has become synonymous with hardware and retail service in Prince Edward County, but that almost didn’t happen.

Hank Busscher, who received the North American Retail Hardware Association (NRHA) Golden Hammer award for 50 years of service to his industry, hadn’t intended on operating a store in Picton and he had to do some selling to convince his wife, Pat, to enter the business. 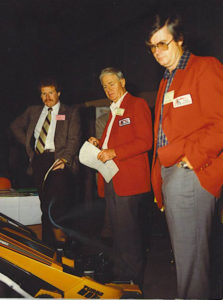 On the job – Hank Busscher, right, was involved in Home Hardware from its earliest days. Even before owning a store or working for the company, Busscher travelled with founder Walter Hachborn to teach dealers about more about selling electric products. (Submitted photo)

As he received his award at a Home Hardware shareholders meeting last fall, he thought back to 1963 when he started working at manufacturing company Markel Electric Products in the Niagara city Fort Erie, Ont.

A native of the Netherlands who came to Canada in the 1950s, Busscher delivered a sample heater to the Hollinger hardware store in St. Jacobs, Ont. run by Home Hardware founder Walter Hachborn.

Still working for Markel, Busscher began to trave with Hachborn to stores adopting the Home banner to teach dealers how to sell electric products. On one trip back home from Ottawa, Hachborn mentioned he’d like Busscher to visit a struggling store in Picton to see why it wasn’t reaching its potential. Busscher’s first impressions of his visit to the former Hadden Hardware at 182 Main Street were lasting and life-altering.

“Arriving in Picton, I couldn’t drive down the main street easily as it was much too busy. I entered the store and met some of the local employees: Betty Hele, Doris Harvey and Bert Eggleton and immediately felt at home.”

After talking with Pat, the couple moved their young family to Prince Edward County in 1976, with the support of Busscher’s parents as business partners.

Busscher’s son, Adam, who now operates the business with his wife Chrissy, brother Mark and sister-in-law Ruth Ann, remembers those as humble, but exciting times.

“They started out with really nothing. We lived above the store and he worked in the store every day. It just started as a small business and it grew and grew and grew. We truly have grown with the community.” Adam says some of his earliest memories were working in that creaky floored store on Main Street, helping his parents put away inventory and place pricing stickers on merchandise.

“I never thought I’d still be doing this today,” he said.

Hank Busscher continued to work hard establishing his business at that original store, until he saw an opportunity to expand in 1991 by buying the former Grindrod gas station further west on Main Street, where the Prince Edward Memorial Hospital Auxiliary operates its thrift shop today.

“It was a leap of faith,” said Adam Busscher. “To jump in with both feet, at that time it was an expensive building and he really was taking a risk that it would be successful. He deserves a lot of credit for that, it was a challenging move.”

At that time, Hank and Pat still spent a lot of time working with customers hands-on in the store. They worked hard and met the challenge of meeting an expanding payroll.

“They worked hard. My mom and dad, they worked together every day in the business. It was not like today where you have 70-plus employees. They worked when they had three, two or one employee — every day, open to close. It was a different operation.”

As time wore on and his sons took a more active role in the business, Hank Busscher was never far away offering his guiding hands and wisdom to see the operations continue to grow.

“He’s not necessarily as active in the day-to-day, but he’s active in the high-level decisions we make and where we’re planning to go next,” Adam Busscher said.

He indicated it was his father who had the vision to approach a competitor in Wellington Building Supplies about a 2006 purchase that would help then learn more about the lumber. That was a precursor to a successful move in 2009 to the new build where Home Hardware is located today on the Loyalist Parkway. The family also renovated the Cleminson Street location in Wellington into a Home Building Centre.

“He was instrumental in that,” Adam Busscher said. “Those moves were a little more calculated (than the 1991 purchase). We had more information, more success behind us and more indications that made us confident we’d be successful going forward.”

Adam Busscher has also served as the chairman of the NRHA. He said that it is rare for members to be in the industry as long as his father, so it’s important to offer recognition.

“Usually, there are generally two or three a year that will get to be 50 years in the industry and they are recognized for it,” he said. “This past fall, my dad was available and it was the right time as he’d certainly put his time in and deserved the accolade,” he said. “It was great. He was presented the award by the Home Hardware CEO at the time. That was pretty special to him, it was someone he’d done a lot of business with over the years.

Recently, Hank has been soaking up some sun in Florida over the winter, but even in his moments of relaxation, he isn’t far from the chain of hardware stores he’d had a considerable hand in building. Asked about the possibility of an interview this week, Adam said his dad was at a convention put on by the company.

Meanwhile, back on the Loyalist Parkway, his family is continuing to build his legacy in his adopted hometown.

“We truly are a family business,” said Adam Busscher. “I intend to be doing this for the rest of my life.”

Home Hardware has been a generous supporter of numerous community causes and it has recently taken a leading role in the Prince Edward County Memorial Hospital Association’s Back the Build campaign. While looking back fondly on the work his father did building a positive reputation, Adam Busscher often credits a dedicated team of employees who work to maintain customers’ expectations and build upon them as the business and the county it serves continues to grow larger in scope.

The trick, he said, is to remember that while the business has changed greatly over the years, the fundamentals that Hank Busscher brought with him to a small-town retail operation remain important today.

“Serving customers is what we do best — actually helping people,” he said. “It becomes challenging as you grow to touch and feel every transaction, but we’re committed to service.” In surveying local businesses, Busscher says over 40 years for his family may look pretty young in comparison to other legacy businesses, but he believes Hank built a strong blueprint for continued success.

Or, in Hank’s own words from his Golden Hammer acceptance speech: “We have grown as the community around us has grown and we have prospered with the support of our employees and the people of Prince Edward County.”