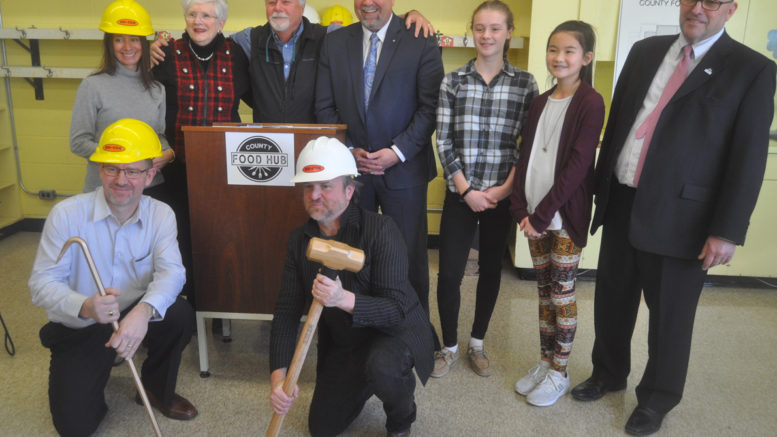 Innovative culinary centre to open within school this summer

As students played outside on the playground at Sophiasburgh Central School, dignitaries gathered Friday in one of their former classrooms to celebrate a transformative project that saved their school.

That classroom — the closest to the front of the school on the west side of the building — will soon become a commercial kitchen, which will be at the centre of the County Food Hub.

Councillor Bill Roberts, who had several community members gather at his house to brainstorm solutions when the Hastings and Prince Edward District School Board first considered closing the school, called the hub something “extraordinarily special” that highlights what partnerships can achieve.

“We’re developing a model for rural education and a new way of making use of local school resources for the benefit of the community — community health and educational access for our wonderful students,” he said. “We’re developing a unique made-in-the-county solution right here with the County Food Hub, a resource that supports innovation, entrepreneurship and training of our remarkable food industry as well.”

Mike Farrell, the president of the board of the local not-for-profit, said those working toward the hub thought there was a better solution than just campaigning to keep their small-town school open without addressing the problems of declining enrolment by looking at a bigger picture than was immediately presented.

“One thing that came was a sense within our developing group that it’s not enough just to say ‘No’ to these types of things or anything you don’t want in your community. It’s vitally important to provide a viable, practical alternative solution.” 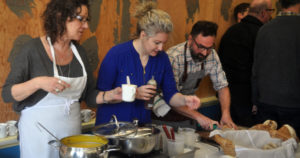 Making meals – County Food Hub board members Sacha Squair, Melissa Tran, and Albert Ponzo dish out Ponzo’s locally grown squash soup with garnishes during a groundbreaking ceremony Friday. The luncheon was served in a room that will be converted for use as a commercial kitchen by the summer. (Adam Bramburger/Gazette staff)

He informed a room full of supporters that much had happened since the school board offered the County Food Hub a five-year lease for the food service and sustainability centre and a stay of execution for the adjoining school last September.

The Food To Share collective has signed on to become the first tenant in the space, using a classroom for food preparation and storage centre. With the input of director of operations and culinary research, Albert Ponzo, the hub is working on a partnership with the school board and Hastings and Prince Edward Public Health to teach food literacy. There’s also significant interest in a food business accelerator program.

First, however, there will be a series of ongoing capital improvements to create the kitchen space.

“I’m so excited for the future and making our vision and mission come to life,” Farrell said. “We’re planning to be open for business by June of this year. We are on that hard as much as we can. It’s growing season and we want to start there.”

Politicians at all levels and community backers saw the potential in the project with over $800,000 raised in just over nine months. Mayor Steve Ferguson spoke positively about the leadership of Farrell, co-chair Todd Foster, and their committee as well as their collaboration with the municipality and others.

He remembered a slide at a town hall meeting a year ago that stated “We will do this” and remarked about the way people worked together to achieve a worthy goal.

“This hub and this initiative illustrates what Prince Edward County does so very well. Groups of people gather, a need is identified, resources are solicited and collected, plans are developed and plans are executed. This is now done. I can’t tell you how important it is to the community, to the board, to the province — and let’s not forget the kids who are going to be a part of this school.”

Todd Smith, Ontario’s Minister of Economic Development, Job Creation, and Trade, has been a supporter of the vision since its genesis back when Farrell and others realized that instead of just opposing the board’s accommodations plans, they had to have a solution. From the very start, he said that was evident in the way they approached him and other stakeholders. That sales pitched helped the project attain $90,000 from the Ministry of Agriculture, Food, and Rural Affairs’ rural economic development fund.

“I can tell you there were some lofty goals. I thought, ‘Is this something that could happen in our community?’ These guys were like a dog on a bone, and they were relentless, hitting all the right marks. Everywhere they needed to touch, they were touching,” Smith said. “This really is the model for how things should work in the province… This has potential to be such a catalyst for growth in our community.”

“The importance of putting our public funds to best use in the most creative and strategic ways has been on full display in this project. Repurposing excess space in a school to extend the commercial and educational capacities for local food sustainability is something that everyone here should be very proud to support and witness taking shape,” he said while recognizing the hub’s board and its donors.

Perhaps the most impactful statements were left to those who experience the benefit of seeing their school keep going. School council co-chair Paula Teixeira Leite was in tears as she spoke.

“As a parent, it’s a relief that this is happening,” she said.

Alison Tran, a Grade 7 student spoke about how her mom, cousins, uncles, and even grandparents — who were present for the school’s opening in 1965 — learned within the walls and she is now following in their footsteps.

“I went to Sophiasburgh my whole life and I am so excited to graduate from here. I love this school.”

She said she’s looking forward to the learning opportunities the hub might provide.

Bethany Foster, a Grade 8 student who has been at the school since Junior Kindergarten, said her lone regret regarding the project is she won’t be able to experience it as a Sophiasburgh student when it is fully operational next year. Mostly, however, she was grateful the project gave her and many other students a chance to finish their elementary education in a familiar environment.

“When I heard I might not be able to graduate here it was — to say the least — upsetting. I wanted to graduate alongside my friends and the people I grew up with since I was 4 years old. Not only will my class be able to graduate from this school, but many other classes who come after us will be able to do so as well,” she said. “I thank the dedicated volunteers, school board officials, and all levels of government for making this happen.”

After finishing a cup of Ponzo’s locally grown and prepared squash soup, Farrell led the Gazette on a short tour of the County Food Hub wing. He glanced at children playing in the yard, surveyed the work to be done, and turned his attention back toward the commercial kitchen space.

“It’s a culmination of a couple years of work, really. Of partnership, activism, and engagement and understanding the political process. This gets me and the whole board to get it up and running and get the business growing,” he said. “That shared kitchen is going to go from the mom-and-pop operations to people who want to go from the road stand to the market stand, the market stand to Sobeys, and to regional. That’s going to be the hot bed.”

Also from there, he said, an understanding of food literacy will be forged in future generations, just as home economics or domestic studies classes once did for his own generation. That’s important looking forward.

“They’re touching food, learning how to make it and understanding what it is. There’s also exposure to entrepreneurs who will show them there’s a future in agri-food — and not just farming, value-added as well. They’re learn you don’t have to go to the city, you can come back here. That’s what really gets me excited.”