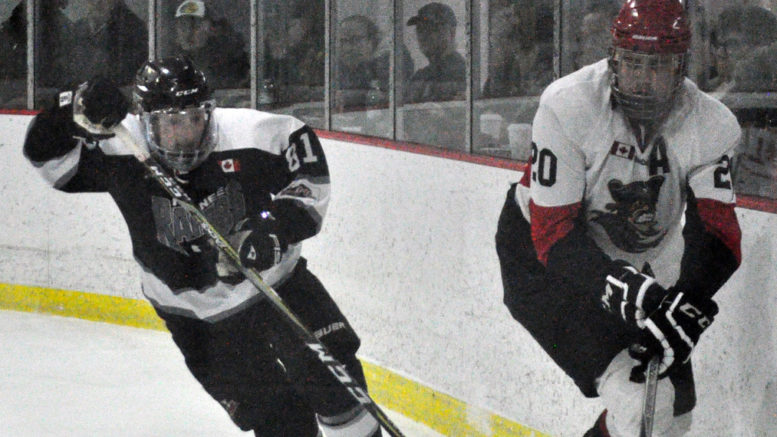 If any player on the roster personifies Picton’s gradual development into a solid, all around entity it would be the Shannonville rookie who has 16 points in Picton’s last dozen games.

In those 12 games Picton racked up a 10-1-1 record and sails into the post season as the division’s hottest club.

With the game only serving as window dressing between the Tod’s top two teams who are both locked into their respective post season seedings, one would need to be careful to place too much weight in the contest and using it to as a bellwether marker of a potential division final next month.

But there was no discounting Picton’s excellent puck movement in overtime as the locals pushed for a winning goal that would see the organization hit the 30 win plateau for the first time since the 2013-2014 season.

Eventually, a Matthew Scott volley found the stick of McLellan who was standing to the right of Napanee netminder Bailey Maracle.

In tight without much space to work, McLellan completed a roof job on the Raiders goalie with just 60 seconds left in the extra session in a game that might have encapsulated Picton’s season.

An early deficit against the Raiders but plenty of gumption and tenacity to remind their friends down County Rd. 49 in Napanee that this Picton team isn’t going away.

Picton battled all night to stick with the Tod division leaders.

After beating Napanee in their previous two contests (the last being a 1-0 shutout thanks to Pirates netminder Kyle Renaud), one would have figured the Raiders would be chomping at the bit to get an early goal in the Pirates net and it was Ryan Casselman putting the visitors ahead 1-0 in the game’s opening five minutes.

Picton would respond later in the frame off a nice passing play that saw Nate Boomhower tuck home a back door feed from Justin Arnold at the 14:11 mark.

Signs that this Pirates team is water tight have been more and more clear as the 2018-19 Provincial Junior Hockey League season has wore on and another emerged in the last minute of the first.

On a power play, Picton would surrender a shorthanded marker to Justynn Steven with just eight seconds left on the clock.

Down 2-1 and giving up a back breaking goal such as this against an outfit with a gaudy .884 winning percentage might have sunk a lessor hockey team and if it was earlier in the season, one might have expected an uphill battle for the locals the rest of the way.
But Picton has the confidence that comes with the knowledge that they can hang with the best teams in the province and the Pirates put in a workman-like effort in the second.

Even after Greg Powles would stake Napanee to a 3-1 lead, the Pirates rebounded nicely.

Griffen Conger would make a nice feed to Noah Brant just over a minute later to get the Pirates back to within one and then, with just over two minutes left it the second stanza, another nice Arnold feed set up freshman Matt Poole for the Consecon native’s 21st goal of the season.

Depth has become an immense strength this season with development being the crux of this positive attribute for Picton.

When Picton fell behind a for a third time in the final period, it was once again a rookie answering the bell.

After former Wellington Duke Nelson Powers made it 4-3 in favour of the visitors, defenceman Derek Vos’s blue line blast skipped past Maracle at 10:44 to knot the game at 4-4 and set up McLellan’s dramatic dagger in the extra session.

Renaud made 38 stops for Picton while Maracle had 27 saves in the Napanee net.

Although the Tod Division post season slate has yet to be announced, it’s almost certain Picton will open at home on Feb. 21 against the Amherstview Jets.

On Board with the Pirates: The club recognized graduating defenceman Scott and Troy Eaton, both county natives as well as Napanee overagers Casselman and Nicholas Nabuurs prior to the game…Conger winds up leading Picton’s point parade in 2018-19 with 21 goals and 33 helpers for 54 points in 39 games. McLellan was second with 46 points (26 goals + 20 assists)…Napanee will likely play the Port Hope Panthers in the first round but the Cats go into the final weekend of the regular season needing to secure at least a point in their final two games. The Gananoque Islanders picked up a win without playing as the Georgina Ice declined to play their final game of the regular season scheduled for Saturday at the gateway to the Thousand Islands. By benefit of the forfeit, the Islanders are tied with the Panthers with and hold a tie-break scenario. Port Hope needs a point in either Saturday against Amherstview or Sunday against Napanee. Both games are in Port Hope.