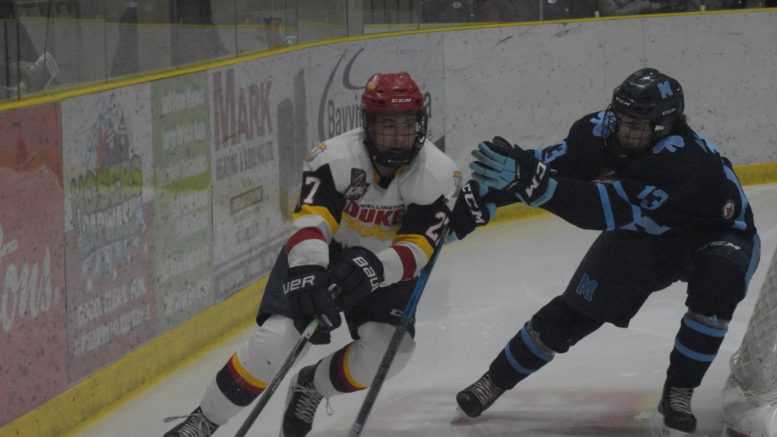 Despite having one game left in the 2018-19 regular season of the Ontario Junior Hockey League, the Wellington Dukes can allow their first round post season opponent in the form of the Cobourg Cougars to become their singular focus.

That’s because due to a series of weather-based cancelations, the two teams will finish off the OJHL regular season on Mon. Feb 25 in a rather meaningless game in Cobourg before commencing a first round post season set in the East Division semi-finals starting later next week.

Yes, if the first round of the 2019 OJHL post season between Cobourg and Wellington goes the limit, the two teams will have actually played eight straight games against one another.

Won’t Games 5, 6 and 7 be a delightfully intense and gritty affair if that scenario plays itself out?

Wellington, currently sitting fourth in the division with a 29-18-6 record, had designs of sliding into that third spot in the East and setting up a post season Battle of Quinte versus Trenton in the first round if the Dukes could have picked up some points and got some help from the field by way of sending the Whitby Fury down in defeat.

Wellington actually bested Whitby on the road on Monday afternoon in overtime 3-2 but the Fury only have two regulation losses in the month of February and have managed to out pace Wellington as the season reaches its final stage.

Trenton could still catch Cobourg but would need to sweep a home-and-home two game set this weekend and then hope Wellington beats Cobourg in regulation on next Monday in a game that would take on much more importance for both teams should Cobourg fail to register a point and slip to second place.

Wellington was full credit for a five-of-six possible points weekend, sandwiching a pair of 3-2 wins against St. Mikes Friday and Whitby Monday, respectively, around a 3-2 overtime loss of Cobourg on Sunday.

To kick off the weekend, Wellington and the visiting Buzzers played it pretty close to the vest on Friday night until a late game sequence offered the Dukes the opportunity to win.

The Dukes were staked to a 1-0 in the first thanks to a nice Frank Vitucci shot that zipped past Buzzers starter Sebastien Labora with just under three minutes left in the frame.

The Buzzers would get back to even at 4:12 of the second when Tyler Busillo ripped a wrist shot past Wellington netminder Logan Bateman to make it 1-1.

St. Mike’s took their first lead in the contest when Drake LaFontaine’s goal snuck past Bateman and into the Wellington net at 14:38.

The Dukes were badly outshot in the second 17-6 and looked to be limping towards the third period.

But in the third, a more determined Wellington group emerged and it was Dylan Massie setting up Tyson Gilmour just 33 seconds into the frame to tie up the game at 2-2.

Outshooting the Buzzers 13-7 in the third, Wellington would have a few solid chances to forge ahead for the second time in the game but waited until the final minute before tickling the St. Mike’s twine.

Dawson Ellis spied an open Adam Usinger and the Milford, Connecticut native made no mistake with a chance, beating Labora with just 17 seconds left to lift the hosts to a 3-2 win.

On Sunday in the final home game of the regular season, Cobourg’s Nick Favaro would tip home a George Miranda power play point blast midway through the first period to stake visiting Cobourg to an early 1-0 lead. 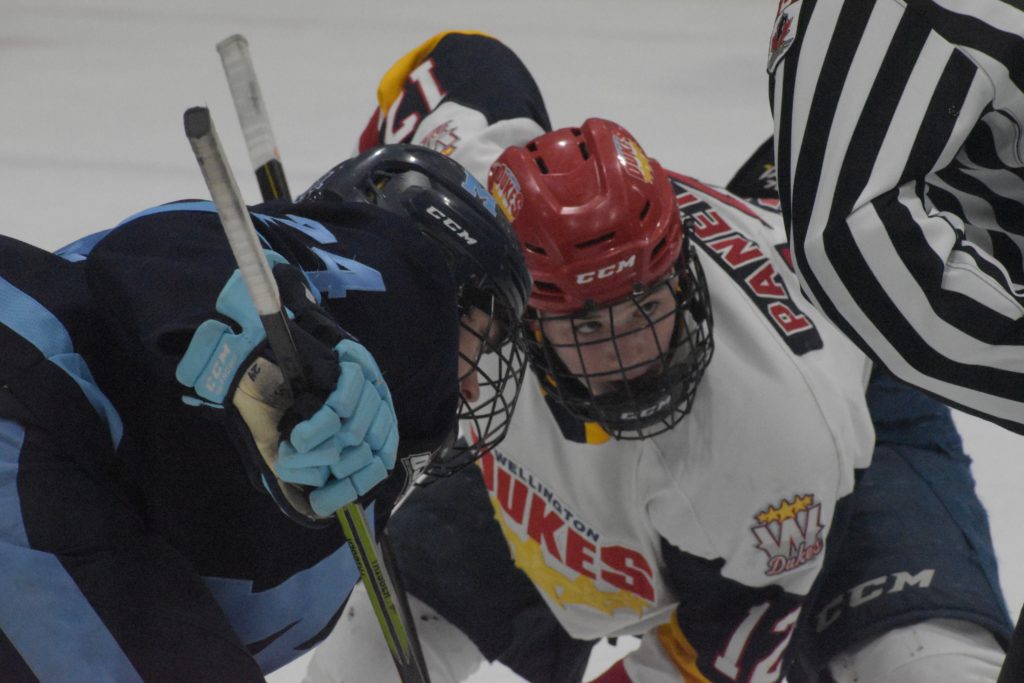 In the second, Wellington responded with a power play goal of their own as the Dukes passed the puck effortlessly around the Cougar net and starter Dershhan Stewart.

Elijah Gonsalves would make a nice feed to Massie who seemed to draw every Cougar defender to himself before dispensing the puck over to a wide open Gilmour who had a nice tap in to make it 1-1 at 13:29.

But the Cougars and Riley McCutcheon fooled Bateman from the near boards with under two minutes left in the second stanza.

Afforded a power play midway through the third, Tim Fallowfield managed to put the puck on Andrew Rinaldi’s stick and the Montreal, QC native had time and space to rip a top shelf effort past Stewart at the 9:30 mark of the third.

The teams went to overtime and a blueline turnover at the Cobourg end turned into a 2-on-0 rush against Wellington that called on Bateman to make a pair of goal line stops to keep the contest from ending early in the first extra stanza.

In the second three-on-three session, it was Favaro ending it at the 56 second mark as he followed up his shot from the far hash mark unimpeded and beat a sprawling Bateman for the game winner.

On Monday, the Wellington Dukes turned to Picton Pirate callup Kyle Renaud who has done wonderful things in the net for the Provincial Junior Hockey League counterparts further down Loyalist Parkway.

But it was a rocky start for Renaud as Ryan Smith’s harmless shot at 9:15 beat the Ottawa native for a 1-0 lead for the hosts.

But just over two minutes later the visiting Wellington Dukes responded as Gonsalves dangled his way up the middle and ripped a half slap shot past Whitby starter Luke Pearson at 11:57.

After a scoreless second in which both teams clanked pucks off the bar, Wellington pulled ahead.

Rinaldi would use a Whitby Fury defender as a screen and beat Pearson with 3:56 left to push the Dukes ahead.

Wellington had difficulties finishing the contest out and a late minor penalty coupled with Whitby coach Rob Pearson lifting his netminder paid dividends as Carson Gallagher was able to sweep a Renaud save past the goalie to knot the game at 2-2 with just under two minutes left.

A late Whitby penalty setup a 4-on-3 man advantage in the first couple of minutes of overtime.

Wellington defenceman Quinn Hanna teed up a point blast for his teammate Brett Humberstone just 1:25 into the extra session.

Pearson would make the initial stop but the puck trickled to the goal line.

Rinaldi, swooping in from beside the post, tucked the puck into the Whitby cage for the game winner.

Renaud would make 29 saves and thank his goal posts for some added assistance in picking up his first OJHL win.

Wellington’s post season schedule has yet to be announced but it’s expected, barring a complete Cobourg meltdown, that the Dukes and Cougars will likely open up their series on either Wed Feb. 27 or Thurs. Feb. 28 in Cobourg.