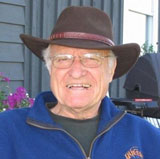 William George Howes
July 13, 1932 – February 14, 2019
Bill died peacefully, at Hospice Prince Edward, surrounded by the love of his family. He leaves his daughter, Liz and son-in-law Stewart Colvin. He was predeceased by his wife, Berva, and sons Bill and Grant. Survived by his daughters-in-law Debbie (Bill) and Jen Dean (Grant). He was a supportive and proud grandfather to Jason (Kristy), Jessie (Dustin), Daniel (Kristina), Dylan (Maddie) and Alastair, as well as a great grandfather of six. He will be missed by his surviving siblings, Barb Woods, Dorothy Clayton, Gwen (Bob Prentice) and brother Bob. He was predeceased by his sister Mary Howes. Bill was born in Kirkland Lake to Sheelah (Megill) and Archie Howes. He graduated from Queen’s University, Mining Engineering in 1954. During his career he worked for Chevron, Atlas Steels, Merrill Lynch and Pitfield MacKay Ross, retiring from The Royal Bank in 1998. He always enjoyed working with his sons at the family farm in Waupoos. A service of remembrance will be held in July, followed by interment at Rose’s Cemetery. Memorial donations to Hospice Prince Edward, or a charity of choice, would be appreciated by the family. Whattam Funeral Home www.whattamfuneralhome.com