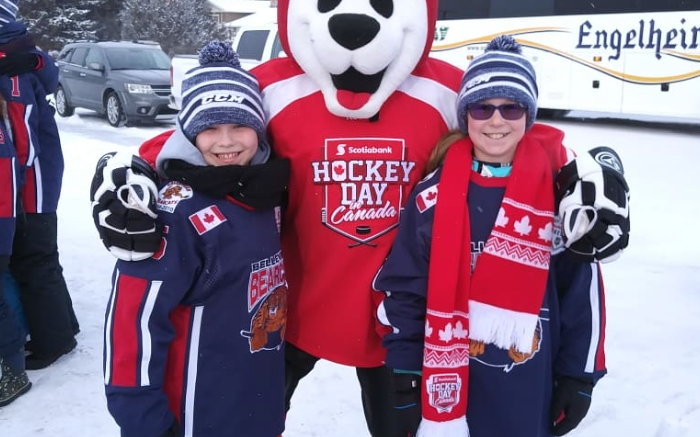 A pair of players from the 2017-2018 Ontario Women’s Hockey Association Champion Spry Site Supervision Atom A Belleville Bearcats that are local county residents joined their teammates from last season for the trip of a lifetime where they were treated like and were able to celebrate with hockey royalty including former pros Darcy Tucker and Lanny McDonald, hockey legend Cassie Campbell and, of course, Don Cherry and Ron McLean.

Brylie Renaud and Taylor Wood might not be playing on the same team this season but both Ameliasburgh residents are taking a deep breath after taking it all in on the Canadian prairies earlier this month. 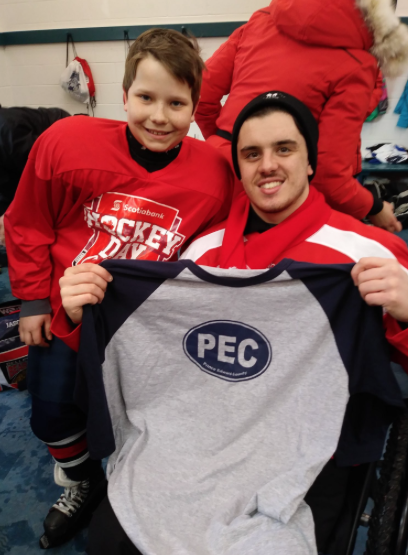 Taylor Wood of the Belleville Bearcats had a special present for Ryan Straschnitzki of the Humboldt Broncos. (Submitted Photo)

Through winning Season three of Scotiabank Heroes of Hockey Day challenge filmed this offeseason with hosts P.K. Subban and Campbell, the Bearcats were feted with an all expenses paid trip to the Hockey Day Celebrations.

Renaud now tends net for the Peewee Napanee Crunch and, like Wood, had a chance to enjoy their first plane trip with none other than Cherry, the star of Hockey Night in Canada’s Coach’s Corner

“We got to meet Ron McLean there and Don Cherry was on the same plane so we had our picture taken at the airport with him,” Renaud recalled. “I got a chance to play with my team one last time against a team from Swift Current so that was very special in itself.”

Since capturing the provincial crown last season, there hasn’t been too much of an offseason for the Bearcats and the whirlwind finally culminated on Feb. 2.

After winning the championship, the club was hand picked to take part in the challenge competition that featured hockey luminaries including Auston Matthews.

After winning, the players went about preparing for and participating in their 2018-19 seasons but knowing that a special, once-in-a-lifetime trip waited for them in early Feb.

“It felt like I was famous and everybody in the world got to see me on tv,” Wood said. “We always had a “crew” with us everywhere we went. There was always somebody taking pictures and telling us where we had to be and what we were supposed to do…I felt like a movie star.”

Despite the bone chilling cold that comes with subsisting in February in Swift Current, the players had a great time taking part in a number of both indoor and outdoor activities including a parade that featured the Stanley Cup and be part of the puck drop on an NHL alumni game that took place at the Credit Union iPlex.

Both Wood and Renaud had the opportunity to meet Humboldt Bronco Ryan Straschnitzki and the inspirational leader of the team was presented with some authentic PEC shirts.

“(Campbell) was our “coach” through all of the challenges and in Swift Current and (McDonald) also spent a lot of time with us and talked with us. (Straschnitzki) was pretty cool to meet, my mom and I took some PEC shirts for him and his family to have, they thought that was really nice,” Wood added.

After playing defence last season, Wood has discovered a knack for finding the net and has moved up to centre in her second year of atom as her Bearcats will look to defend their provincial crown in April.

“I can play wherever I need to but I really like taking face offs,” Wood told the Gazette. “I like being able to help out my defencemen in our end and the forwards in the offensive zone.”

Napanee is also hoping to qualify for the OWHA showdown.

“The season is going pretty good, we are trying to qualify for the provincial tournament,” Renaud said. “I like being the goalie and having the responsibility of stopping the puck and I like hanging out with my teammates.”