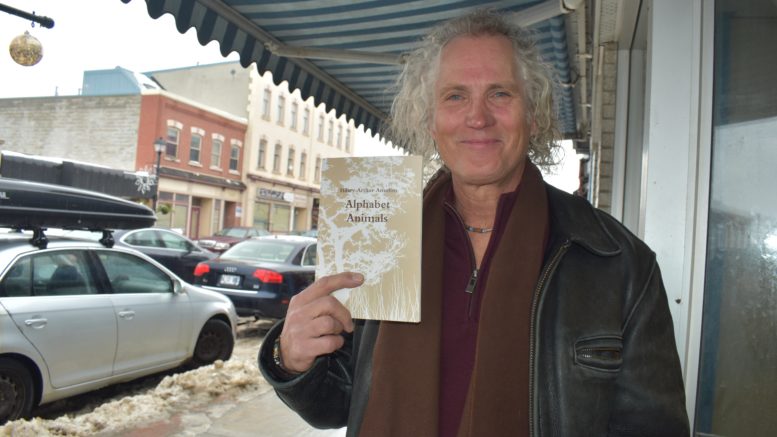 Encouraged by his adult son to pen a collection of bed time tales he weaved as father in younger years, a Consecon-based author has complied a series of uplifting, inspirational and morally affirming tales for children based around nature and the letters of the alphabet.

Hilary Amolins’ Alphabet Animals is available locally at Books & Co. As well as online book retailers such as lulu.com, amazon and Barnes and Noble.

Amolins told the Gazette that when his son Zachary was a toddler, part of the bedtime routine involved his son choosing a letter of the alphabet and the author weaving a story around that letter.

The story had to be about some animal, bird or any living breathing species that started with the letter of the night and Amolins tried to include some life lessons into each story.

What was developed were parables and allegories for all ages.

Tales of Adam the Ant and how the colour of ones skin is irrelevant or Diana the Dolphin and how one shouldn’t leave home until they are ready and that telling your mom and dad where you are and and listening to elders is a good course of action.

Or Quan the quetzal and how one should always keep their head held high and look around.

There are even some local locations and animals tied into the tales including Frankie the Fish, a tale that takes place in Lake Consecon and speaks to the character traits of responsibility, caring and discipline.

I would grab them out of thin air and make them up as I went along,” Amolins said, “I’ve always tried to encourage imagine in him and that was a part of the process as well.”

Amolins called trying to find species that matched the letter my son chose “a superbly entertaining game” and ensuring that somehow before he got to the end of a story there was also a useful message.

With his son reaching adulthood recently, Zachary encouraged Amolins to compile the stories into a book format thus the ‘Alphabet Animals’ collection was born.

While his primary occupation revolves around his vacation rental and management company, Amolins enjoys the craft of writing and his letters have been published both nationally in such publications as Macleans and locally in the Gazette as well as other local newspapers.

His past published works include a journal of his travels of Costa Rica and Amolins is currently working on a stage play as well as a short story that will be submitted to the Toronto Star’s short story competition.

“It’s such a treat now to be able to write now a days and you can get your work into the hands of readers with relative ease,” he added.