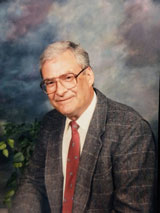 George Frederick Underhill
1939 –  2019
George died peacefully at PEC Memorial Hospital on February 18th, 2019. George was born in Needham, Massachusetts in 1939 to Chester and Nina Underhill. His father emigrated as a young man from New Brunswick to the United States. George went back to New Brunswick to attend UNB in Fredericton where he met and married Diane, his beloved wife of 56 years. He is predeceased by his sister Barbara (Wally Kemp) and survived by his brother Gary (Patricia). George will be sadly missed by his wife Diane, his daughters Lynne and Susan (Ian Dickson), his grandsons Jacob and Samuel and many nieces and nephews. While George had a successful 30 year career with IBM, some of his most meaningful accomplishments came when he retired to his home on Smith’s Bay in Prince Edward County in 1992. He served on the PEC Round Table and was a founding member of Trash Bash. He was a board member of Quinte Conservation, PEC Stewardship Council, Milford Fair Board, South Bay United Church and the PEC Accessibility Committee. George was an outdoorsman and an artist. He was an avid birdwatcher, fisherman, hunter, bridge player, radio play personality, and woodcrafter. He was also a writer, producing a monthly column for the South Marysburgh Mirror, three humourist books and publishing three stories in Ontario Out of Doors. His offbeat thoughts and opinions on life will be greatly missed. Cremation has taken place. Memorial Service at Picton United Church, Saturday, February 23, at 2:00 pm. Friends may visit with the family one hour prior to the service. Reverend Phil Hobbs to officiate. Donations: PEC Memorial Hospital Foundation or South Bay United Church. Whattam Funeral Home www.whattamfuneralhome.com