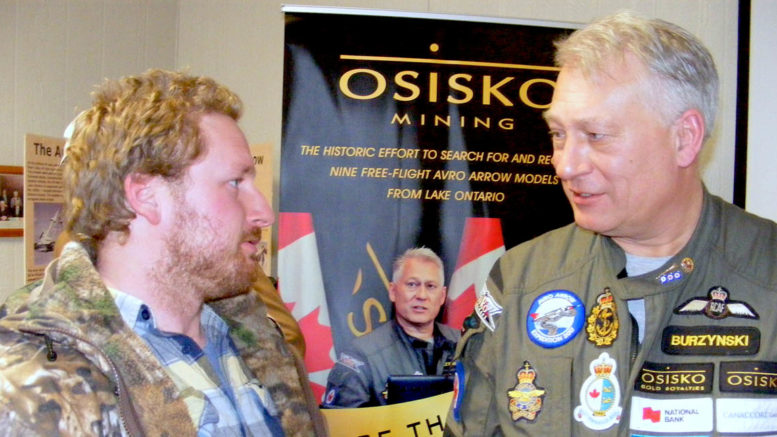 Expedition interest - Aaron Snyder of Foxboro (left) talks with John Burzynski, CEO of Osisko Mining and the man leading the search for the lost models of the Avro Arrow aircraft, following a talk called “Raising the Arrow” at Milford Town Hall on Sunday. (Terry McNamee/For The Gazette)

After early tester found, focus shifts to finding one of the latter, detailed implements launched at Pt. Petre

It’s been more than 50 years since Deseronto resident Jim Johnston worked on the Avro Arrow testing project at Pt. Petre at the southern tip of Prince Edward County. But he was at the Milford Town Hall on Sunday to hear all about the search to retrieve the lost models of Canada’s most iconic — and doomed — fighter aircraft.

Dr. Richard Mayne, chief historian for the Royal Canadian Air Force, said Johnston was a big help to the recovery project, helping to identify people in old photos and sharing his extensive knowledge of the model tests conducted on the shore of Lake Ontario, especially since only a few of those people are still around. 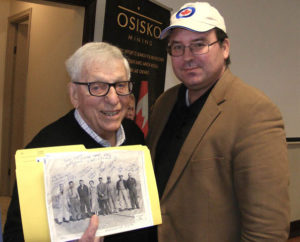 Living link – Jim Johnston, of Deseronto, shows Dr. Richard Mayne, the Royal Canadian Air Force chief historian, a photo of himself and his Avro Arrow colleagues. They participated in a discussion on the Finding The Arrow expedition Sunday in Milford. (Terry McNamee/For The Gazette)

Prime Minister John Diefenbaker cancelled the Arrow project in 1959 and ordered that everything involved with the project, including all six existing aircraft, blueprints and more, be destroyed. All 30,000 people who worked on the project lost their jobs. The models in the lake, plus two more lost in the sea off the American east coast, were all that officially remained.

The Arrow models were used to test the new delta wing design and the durability of the magnesium-aluminum alloy construction at a speed of Mach 2 (twice the speed of sound). They were launched off Point Petre, which was and still is a military installation, over Lake Ontario. Three prior searches to find the models over the past few decades all failed, but new technology is making a difference .

“There are nine free-flight models out in the water somewhere,” said John Burzynski, chief executive officer of Osisko Mining and the man leading the current search, which is privately funded.

When Burzynski first heard about the lost Arrow models, he was intrigued. His OEX Recovery Group, which usually searches for mining possibilities, obtained permission to search, and he set out to learn everything he could about the lost models and the best way to find and recover them. He hired Kraken Sonar from St. John’s Newfoundland, to use their cutting-edge, original Canadian technology to survey the lake bottom off Point Petre for miniature Avro Arrow-shaped objects beginning in summer 2017.

“Their detection capability was down to three centimetres,” Burzynski said. “It’s the first time this very high detailed definition sonar has ever been used anywhere in Canada.”

One problem they faced is that the lake bottom includes ancient tree stumps, shipwrecks and, because Point Petre had been used to test missiles, hundreds of pieces of dummy ordnance. To add to the difficulties, a thick coating of invasive zebra mussels covers every hard surface, distorting the shapes of objects.

Several hundred more were found in 2018, he said.

The models were one-eighth scale, 12 feet long and 10 feet wide, which would seem easy to find, but because they were moving at about 500 miles per hour when they hit the water, the team didn’t know if they were searching for intact models or just broken pieces. First the team found some of the rocket boosters and used their trajectory to home in on a likely search area. Then, in the summer of 2018, the team discovered just how well the magnesium-aluminum alloy held up to such an impact when they recovered their first Arrow model. It was a bit bent, but intact beneath a heavy coating of mussels. The model, which is currently in Ottawa at the Canada Aviation and Space Museum for restoration, proved to be one of the earliest versions of the final design. Now the team wants to find one of the last, most detailed ones.

“It’s like we found one bookend, and now we want to find the other bookend,” Burzynski said. “Anything we recover will end up on display in Ottawa or Trenton (at the Air Force Museum).”

He said the search is being well documented and will be turned into a documentary film.

As for the destruction of everything else Arrow, that turned out to be false. People took paperwork and saved various bits and pieces. Kids found discarded parts in junkyards, left over after the jets had been scrapped.

“Not everything was destroyed from the program, as thorough as they tried to be,” he said. “There’s actually a lot of information lying around, but it’s all over the place. A lot of it’s in people’s basements.”

Burzynski encourages anyone who has anything original related to the Avro Arrow program to bring them either to the museum in Trenton or in Ottawa so that these precious pieces of history will not be lost forever.