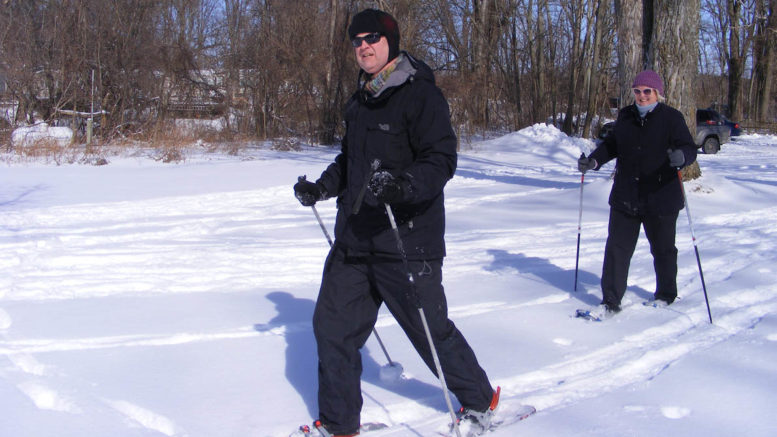 Walking in a winter wonderland - Tim Langford, of Ameliasburgh, (left) and his sister, Margo Langford, of Wellington, set off on snowshoes during the Family Day Snowfest hosted by the Friends of Sandbanks at Maple Rest Heritage House on Monday. (Terry McNamee/For The Gazette)

People from the county put “family” in Family Day as they ventured out to Maple Rest Heritage House in Sandbanks on Monday, Feb. 18, for outdoor winter fun, music, food and history — all of it free of charge.

Snowfest, which has been held every Family Day for over a decade, is run by the Friends of Sandbanks. With fresh snow on the ground, bright sunshine and moderate temperatures, the day was perfect for people who came to take part in snowshoeing, cross-country skiing, tobogganing, a winter hike or sitting around the outdoor campfire.

“We usually get 100 to 125 people,” he said. He said Sandbanks Provincial Park, which owns the property, donates the use of it every year for this event, and the Family Day fun has proven to be a great way to introduce people to Friends of Sandbanks and to attract new members. Inside the historic home, there was something new this year: traditional Francophone food to go along with talks and displays by La Société économique de l’Ontario (SÉO) promoting Indigenous and French-Canadian culture.

The group also told people about Samuel de Champlain’s epic 1,500-kilometre journey from Montréal to Georgian Bay and back, which he started in 1615. It also introduced visitors to Route Champlain, a map that people follow to find historic sites, provincial parks and more as they travel along sections of Champlain’s trek.

“He (Champlain) did spend time in the county,” said Anne-Marie Forcier, one of the presenters.

“He spent two years in Ontario. This new touring route for today’s explorers is based on his route. We’re inviting visitors to be explorers.” The day also included storytelling and traditional songs presented by Gaetan Breton, a musical jam session and hot tourtiere, brown beans, hot chocolate and more served up by volunteers.

Maple Rest Heritage House was built in the 1860s and was restored by the Friends of Sandbanks in the 1990s. It now operates as a rental for overnight guests to the park.