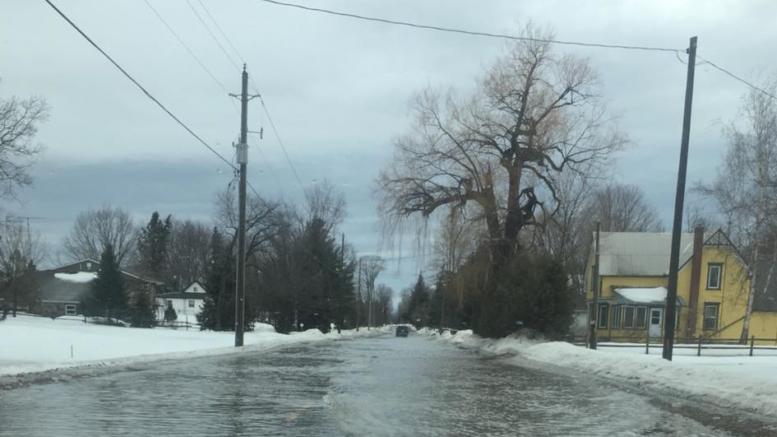 SOGGY COMMUTE- Drivers on County Rd. 12, also known as West Lake Road, were faced with trying conditions Sunday morning as rain water was unable to make its way through underwater drains. (Steven Arthurs for the Gazette)

While the whiteouts had largely subsided by the afternoon, it was a wicked 24 hours of weather in Prince Edward County on Sunday and Monday.

What started out as torrential rains that left a number of roadways in the municipality flooded or at least water covered early Sunday morning ended in tremendous gusts of wind that brought down trees and power lines and helped create a number of snow squalls in Bloomfield, Picton, Cherry Valley and all points south on Monday afternoon. 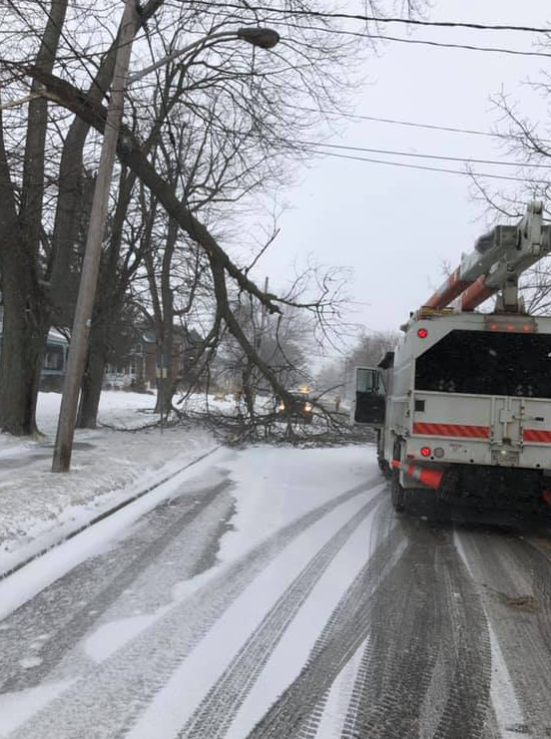 Hydro One crews had a tricky situation to deal with in Wellington on Monday morning. (Sara Bakelaar for the Gazette)

While residents in Prince Edward County had emerged from the majority of wind gusts that topped out at 105 kmh around 7 a.m. At Point Petre on Monday morning relatively unscathed, the municipality remained under a warning and strong southwest winds with gusts up to 90 kmh were expected until late Monday afternoon.

In a press release, County of Prince Edward Media and Communications Coordinator Mark Kerr said blowing snow was causing white-out conditions through areas of The County and that the Ontario Provincial Police reminds motorists to take extra time when traveling Monday and  were instructed to turn on their lights on and drive accordingly.

Electrical power fluctuated in various parts of the county and Hydro One crews were tasked with several downed trees and limbs including one on Wellington’s main street.

County of Prince Edward work crews were busy clearing roads on Monday morning of debris including a fallen tree that blocked a portion of Rock crossroad in North Marysburgh.

After a pleasant start to the weekend which included bright sunshine and calm conditions on Saturday, residents woke up to heavy rains on Sunday morning.

West Lake resident Steven Arthurs shared his photo of a completely flooded stretch of County rd. 12 near the Tambo convenience store as the rain waters found outflows jammed with ice and those underground channels were unable to keep up with the downpour.

After the rains subsided around midday, residents braced for the onslaught of heavy and damaging winds.

Some time after 6 p.m. Sunday, the air out of the west-southwest started to howl and, by 11 p.m., the Environment Canada weather recording station in Point Petre was reporting sustained winds of 83 kmh and gusts up to 100 kmh.

The high winds forced the temporary suspension of service at the Glenora Ferry port late Sunday night but service was restored by mid-morning on Monday.