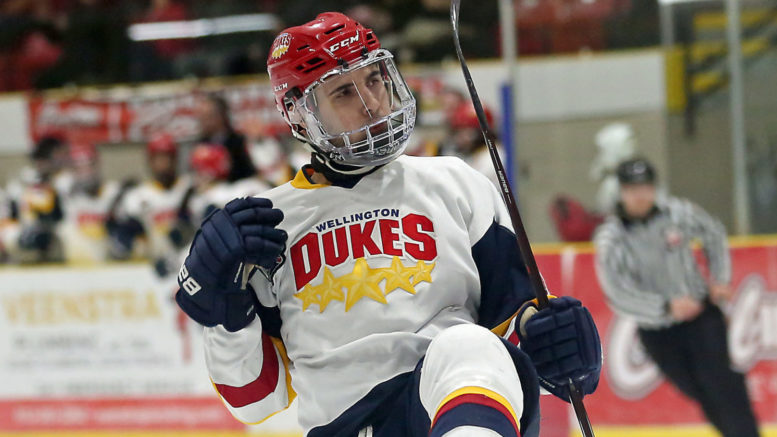 The quest to hit the 30 win plateau for a 18th time in franchise history unravelled in Cobourg on Monday night as the visiting Wellington Dukes fell to the Cougars 5-3 in their final game of the 2018-19 Ontario Junior Hockey League season.

With not much to play for other than eclipsing the 30 win mark and perhaps seeing how they stack up against their 2019 Buckland Cup first round opponents, the Wellington Dukes (29-19-6) fell behind the host Cougars 3-0 in the first period and were chasing the hockey game for the entire 60 minutes.

A pair of Brodie McDougall goals,including a marker just 47 seconds into the contest, sandwiched around a Mac Lowry shorthanded tally was all that the Cougars would need to build a nice lead through 20 minutes.

It would take the Dukes nearly 40 minutes to solve Cobourg starter Noah Featherstonhaugh Gowe and it was Wellington’s Kennan Eddy potting his 11th of the season at the 17:30 mark with help from Dawson Ellis and Ben Roger.

Wellington got even closer in the opening stages of the third frame as Frank Vitucci notched his 19th of the campaign off a feed from Ben Woodhouse to make it 3-2 in favour of Cobourg.

But a lack of discipline at a critical juncture would take the game out of Wellington’s hands.

A powerplay goal by Riley McCutcheon at 2:16 gave the hosts a 4-2 spread but the back breaker came just over three minutest later as McDougall capped off a hat trick effort with Cobourg’s second powerplay marker of the frame.

A pair of powerplay goals and shorthanded goal told the tale as the hosts were firing at 33 per cent versus on the power play versus Wellington’s 0-for-5 offering with the man advantage and that could be a disturbing trend if it continues when the teams meet for real on Saturday in Cobourg for Game One.

Adam Usinger would get one of the goals back on the next shift as he converted a Jacob Thousand pass at 5:56 of the third but that was as close as Wellington got on Monday night.

Wellington starter Logan Bateman was lifted after the first and Tanner Beals saw his first action as a Wellington Duke over the second and third periods, making 13 saves and only allowing the two powerplay markers.

Ledes at Lehigh: The Cougars announced they would be hosting Game One Saturday night at 7:30 p.m.The rest of the schedule has yet to be announced but it’s likely that Wellington would host Game Two on Sunday or Monday evening…The last time Wellington and Cobourg met in the playoffs was 2017. Some Dukes fans will remember that series opener where Wellington let a late lead get away in Game One and the opener more or less set the tone for the rest of the Northeastern Conference Semi Finals. Down 3-2 with less than three minutes left, Cobourg would score a pair of extra attacker goals in the final two minutes to tie the game 3-3 and force overtime. Connor MacEachren would score early in the second overtime to lift the Cougars. The series marked the final time Marty Abrams was behind the Wellington bench and current Dukes bench boss John Druce was skipper of the Cougars at the time…No Duke remains on the current roster from that series but Lowry and Matt Bumstead are Cobourg holdovers…Certainly a sad report that the Kingston Voyageurs will be heading on a voyage that will see the OJHL’s most eastern based franchise move to the cottage country of Collingwood. Wellington and Kingston enjoyed several spirited battles over the years with the Dukes having the Vees number in the early 2000’s and Kingston reversing fortunes and becoming a powerhouse in the late 2000’s and early 2010’s. While the on ice battles were memorable, the off ice hijinks and recruitment battles were the stuff of legend and the staffs and front offices waged continuous war with one another. Who can ever forget former coach Evan Robinson chastising words when he told a reporter that his Wellington counter part Tod Lavender had an assembled club of such immense talent that even his dog could successfully run the Dukes bench? The relocation which is expected to be approved by the OJHL Board of Governors later this week and leave a gaping hole in eastern Ontario in terms of the OJHL footprint and make Wellington the eastern most outpost in the league. One can only imagine what this domino falling will lead to in terms of Jr. A hockey in this part of the province.