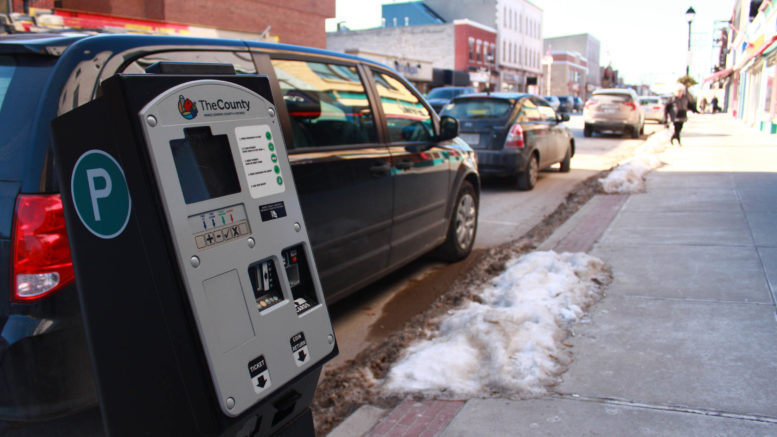 More free parking in the winter but increased rates and fines in the summer appear to be on the horizon for Picton motorists and downtown shoppers.

Municipal staff will table a report at Thursday’s Committee of the whole meeting recommending council approve free parking from Dec. 1 to March 31 annually but change the schedule of rates and fines accordingly to “offset revenue implications”.

The proposed move, which has the blessing of the Picton Business Improvement Association, comes from a report authored by Chief Building and Bylaw Officer Andy Harrison and appears to be motivated by a number of factors including accessibility concerns for patrons attempting to purchase tickets at the pay stations during times when snow removal operations haven’t fully cleared the units as well as to allow for downtown businesses to promote extended free parking outside their shops starting Dec. 1.

“Pay Station intervals have raised accessibility concerns/challenges during the winter months, especially for our aging population,” Harrison said in his report. “Additionally, last winter’s significant amount of snowfall resulted in restricted access to the Pay Stations during times in between snow clearing. The Picton BIA supports the proposed amendments to the Picton Parking Bylaw however, with a request that free parking extend from the period of Nov. 1 to April 31.”

To counter balance the extended free winter parking in downtown Picton, staff is recommending the hourly rate be increased from $1 per hour to $1.50 per hour and that voluntary fines paid within seven days increase from $7 to $10.

Any fine paid after seven days would be increased from $10 to $15 if the motion is approved first by Committee and later ratified by council.

While four months of free parking may appear as taking a large chunk out of municipal coffers, the increased fees and fine rates will actually provide a net gain for the County of Prince Edward.

In a letter of support sent to the municipality in August, 2018, Sarah Doiron, Manager of the Picton BIA said the organization was “very happy” to support the proposed amendments to the Picton Parking By-Law – including free parking during the winter months and an increased hourly rate of $1.50/hr and a monthly parking pass for Market Lane.

“The BIA Board passed a motion to support this initiative at their meeting held on July 25, 2018, with the caveat that free parking should begin on Nov. 1 as opposed to Dec. 1, as the winter weather can be unpredictable and the possibility for snow banks to form in November can create challenges for members of the community attempting to access the pay & display machines,” Doiron wrote. “The BIA Board would also like to recommend a strong communications campaign preceding these changes to notify the public as well as clear signage or covers for the pay & display machines to make it clear from a distance that payment is not required during this time.”

Like a number of other municipalities in the region, the County of Prince Edward currently offers free parking in December and collects coins and payment at the pay stations as donations for the Hastings and Prince Edward Learning Foundation’s ‘Food for Learning’ school snack program and this practice would continue under the proposed bylaw changes.

The report also indicates the proposed free winter parking will still be subject to a two hour maximum in accordance with with established bylaws and the amendments apply to all parking spaces in the controlled parking zones including accessible parking spaces.

If approved, subsequent adoption new bylaw changes to the set fine schedule must be sent to the Ontario Court of Justice for approval prior to enactment, which will include Council approved amendments.

Barring deferral, the Committee is expected to vote on the matter Thursday at Shire Hall.