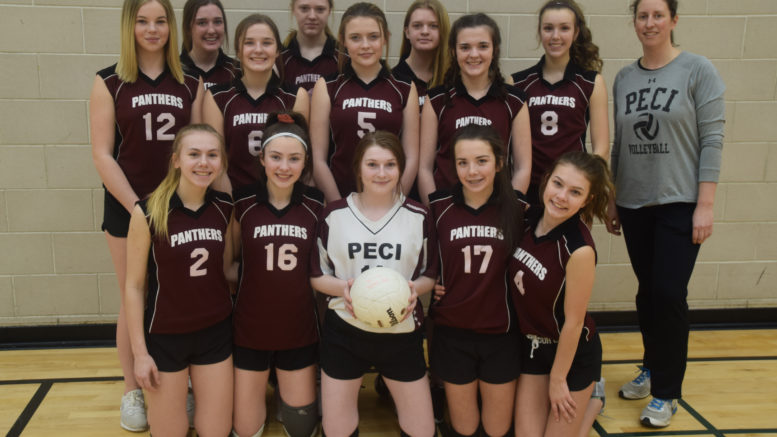 The PECI Junior Volleyball Panthers capped off their best season in the past decade with a COSSA bronze medal on their home court last Friday.

They did so by sweeping the Nicholson Crusaders in straight sets, including a thrilling come-from-behind effort to clinch. In the first contest, the Panthers edged out to an 8-6 lead until they found a groove with Vanessa Wilton behind the service line. That rotation, the home side moved the ball well to score seven straight points. It wasn’t over as the Crusaders worked their way back within four points before PECI could finally put that contest away 25-21. The second contest began to look like a lock for Nicholson as they built up a 15-9 lead with a pair of sizeable runs of their own, but the Panthers showed no quit. Second-year players Kaitlyn McConkey, Gracie Burris, and Abby Conley showed sharp finish at the net, while Taylor Squire came off the bench to serve for five consecutive points. McConkey also had a good run from the service line.

With a tight 23-21 score, Burris put the game away with a pair of strong serves, including a final-point ace that struck the net and dipped below the reach of the Crusaders front row.

Coach Sarah Vader said her team was at its best.

“They were having fun. They were passing the ball well the whole day and communicating really well,” she said. “In that last bronze medal game, we were really trying to work on our front-row transition — getting more hits and not being nervous, having fewer free balls. They did well.”

Throughout the year, Vader said veterans like McConkey, Burris, power hitter Hannah Goad and setter Conley delivered strong leadership and were often in the mix starting. The Panthers also got some strong efforts from younger players rotating in and developing. Delivery – Panthers hitter Abby Conley finds the right spot at the net to score a point for her team during her team’s COSSA bronze-medal winning game Friday afternoon at PECI. (Adam Bramburger/Gazette staff)

The Panthers finished second in the Bay of Quinte Conference regular season standings and also claimed bronze at the league tournament. The building blocks are in place for a strong program moving forward. Vader also said team chemistry played a role in the success.

“I think they really play well together, get along, connect, and have fun,” she said. “I haven’t really done anything different with them, sometimes you get groups that just jell really well from the star. They’ve been super positive from the beginning and that’s all them.”

In the morning, the Panthers dropped three straight decisions to a tough Adam Scott Lions team from Peterborough 25-13, 25-15, and 25-18. Nicholson also was swept in its semifinal, at the hands of the Lindsay Collegiate Spartans.

In the final, the Spartans dropped the first set before reeling off three straight wins to clinch gold.