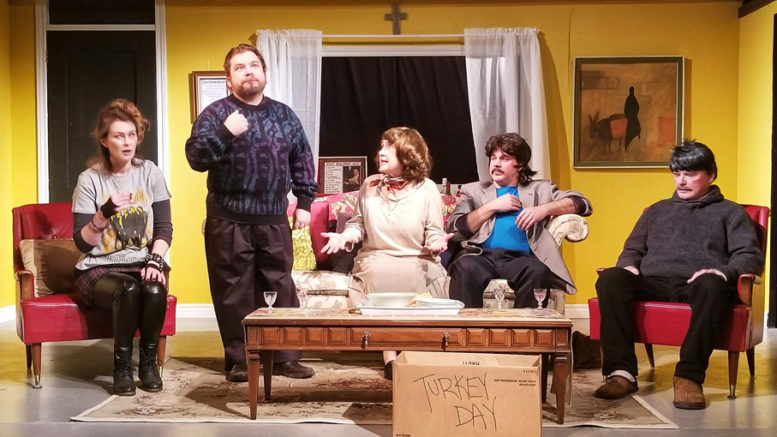 In life, some things change and some things stay the same, no matter what people may wish.

Nowhere is that more evident than around the holidays when adult children come back home to visit their parents and their present day-to-day lives mesh with their childhoods.

Director Cheryl Singer says a mom, a dad, and three adult children are depicted at special occasions over a 30-year timeframe, with each check in happening a decade apart.

“When they come home, how do we make them feel those family traditions again and make them feel at home?” Singer said. “There’s always a lot of push and pull from the kids, like ‘Oh no, not these traditions.’ The empty nesters are trying to keep things the same and adult children are trying to create their own lives.”

Sibling rivalries and old sentiments reappear and the result, Singer says, is a play that has more poignant, dramatic moments than one would anticipate upon a first script reading.

Fran Larkin makes her first stage appearance in over 10 years, playing Ruthie, a mom who wants everything to be just perfect and who thinks she knows best for her children. Fred Lester plays her husband, Bill, who has the fun job of being the laid-back dad who attempts to balance her overbearing, bossy ways.

“They’re kind of a Yin and Yang, it’s fun for sure,” said Singer. Then, there’s the three kids whose changes and similarities over the years drive the comedy.

The eldest son, Richard, is played by Adam McGowan, who is cast in a comedic light in comparison to his last appearance on the PECT stage in Glass Menagerie. In the role of the middle child Maddie, Kim Kennedy makes an enjoyable stage debut after years of work behind the scenes on props. Veteran Kyle Watson steps in to play the youngest son, Thomas. Singer said he’s also playing a bit of a different role than regular audiences may recall.

“I’m very excited because people will be able to see a dramatic side of Kyle. He’s known for his comedy, but he gets to have some drama and seriousness here. He pulls that off equally well.”

Another interesting development the script allows for is the changing of characters over a 30-year period, a drastic contrast to many stories that evolve over hours, days, or maybe weeks. It makes for some fun gags.

That also poses a challenge for stage manager Susie Mitchell, assistant Lori Farrington, and props master Theresa Mainville as costuming and makeup that depicts both aging and period changes is required. Singer said she’s happy with the costuming sourced and believes audience members will be impressed.

“I hope they come away with an experience of something maybe they’ve not seen before. Also, I want them to have a warmth and maybe recognize themselves in this family. It’s warm, heartwarming comedy.”

Since Grennan is a fairly new playwright, Singer said there likely won’t be a lot of audience familiarity with his style or the production itself. She added there are a lot of surprise elements in store and, perhaps, an unexpected ending.

The show is suitable for all ages, but Singer said the comprehension level might be best suited for teens and older audiences.

The curtain opens Saturday, March 2 at 7:30 p.m. Subsequent shows include 2 p.m. matinees on March 3 and March 10 and another Saturday evening show March 9. Tickets are $17 in advance, available at Books & Company, the SideStreet Gallery, or by e-mailing Bonnie Saveall at saveallbonnie@gmail.com. Tickets at the door in Milford are $20, while supplies last.