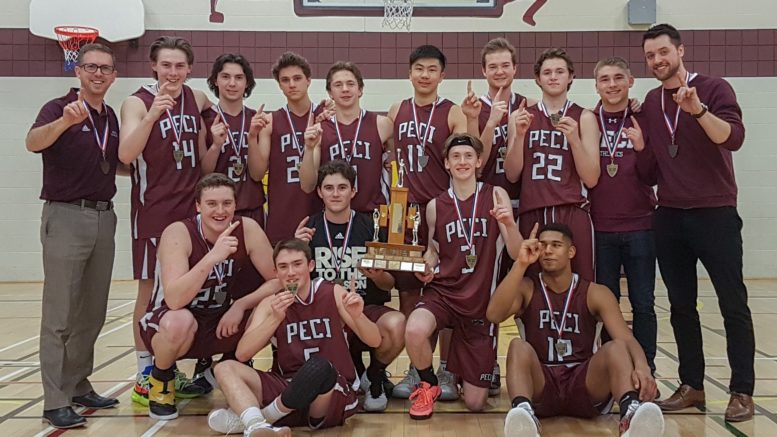 Passion, preparation, and patience helped the PECI Senior Basketball Panthers get over the hump to win at COSSA Friday and play in the school’s first provincial championship next week.

Coaches Taylor Reddick and Rob Garden have each seen their share of silver medals in their time on the court and along the sidelines over the years. Early in the year, they set a goal for their big, skilled, athletic team to go farther. Despite coming up against some bigger AAA schools in Peterborough, that team delivered the requisite pair of wins to do something special.

“We’re finally getting the big one and getting our chance to make an appearance at OFSAA and compete with some of the best teams in the province,” Reddick said. “It’s a pretty special thing for the school, the community, and for all of us who have been a part of it.”

The morning brought a Thomas A. Stewart Griffins team that was every bit the Panthers’ match for size and athleticism in its own home gymnasium. The pressure was evident.

“I think we went through some emotions in the first half knowing what to expect,” forward Logan Stark said. “Then, in the second half we came out and just took over as a team. It was a good team win.” 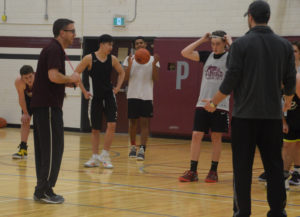 Reddick said that for all the Griffins’ athleticism, they weren’t a very polished basketball team, but physicality had given the Panthers problems throughout the year.

Trailing four points at the half with the season on the line, the Panthers found confidence in trusting their game plan and just playing basketball.

“We slowed things down, rebounded, got a few stops under our belt and sealed the victory,” Reddick said of the 50-42 win.

“We just persevered. We went down, fought our way back and grinder hard.”

He led the scoring with 14 points. Logan Stark had 10.

If the Panthers thought their first win was hard fought, they knew the second game might be tougher as the host St. Peter Saints were the top team in the Kawartha loop. To their benefit, however, they’d scouted their opponents and knew exactly what they would be up against.

“They like to run a 1-3 zone trap that gives a lot of teams problems. We were aware of it, we prepared a couple hours ahead and talked the guys through it. We showed them where shots would come against a defence like that,” Reddick explained. “We also knew they didn’t play a very disciplined game. We knew that if we just kept our heads down, keep our mouths shut and stuck to the plan, we were ultimately going to be where we needed to be at the end of the game.”

“We knew what was coming so we were all mentally prepared for that game. We came into the game, nothing was going to stop us, we were taking that win.”

The teams went back-and-forth in the first half and PECI led by just two at the half. The Panthers had their bench engaged, however, and they brought fresh legs to the court after the break. In the third quarter alone, they put up 20 points. Some 12 of those came from beyond the arc.

“That deflated their zone a bit,” Reddick said. “If you’re shooting the ball well, the zone doesn’t have the same effect. We got them on their heels and kept it going in the fourth.”

Arsenault was a force. He scored many of his game-high 25 points in transition and when the Saints keyed in on stopping him from driving the lane, he hit shots from outside.

“Alex came to play,” Reddick said. “He was definitely our No. 1 guy in that game. He has had quite the run to end the season, he’s definitely our most impactful player.”

Stark and Devon Wilton each added 10 points in support. 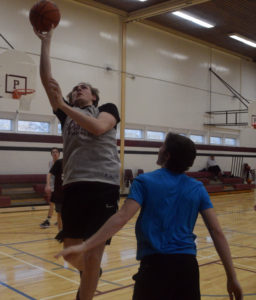 Emerging threat – Logan Stark completes a lay-up in practice Monday. The Grade 11 athlete had 20 points spread over two games at COSSA as one of the Panthers leading scorers. (Adam Bramburger/Gazette staff)

Monday, the Panthers were back at it in the gym to prepare to compete on the provincial stage March 3-6 in Stoney Creek. Displaying their good team chemistry and lack of ego, they acknowledged advice shared by Garden and Reddick that they won’t be able to win on skill alone. The Panthers drilled and scrimmaged knowing that they couldn’t just take every shot provided.

“We know the city game is definitely a lot different in terms of athleticism. There’s simply more kids to choose from and more basketball played in the city compared to areas like here,” Reddick said.

“We’ll want to slow it down to a game we’ll have a success at, working in the half court rather than transition against more athletic players. We need a positive mindset — to not be scared, play our game, and see where it goes.”

Arsenault said discipline and control will be important for the underdogs to surpass their pre-season goals and find some success against top schools.

“The goal was to make it to OFSAA. We accomplished that goal and it just feels good,” he said. “We’re the first ones at our school to do it. We’re excited to go and play hard and make more history.

“I’m looking forward to medals. I want to win. It’s going to be tough but we want to try our best to see if we can win a game, two games, or the whole thing.”

Reddick said his players allowed themselves to achieve something they’ll cherish for a lifetime. Now, they can simply go and focus on the task at hand.

“Going into a AAA gym can be intimidating, but one of my favourite things is coming from a small town like Prince Edward County. Not many people know who you are and that can be used to your advantage. We have nothing to lose really.”

Tournament information will be available at www.ofsaa.on.ca.