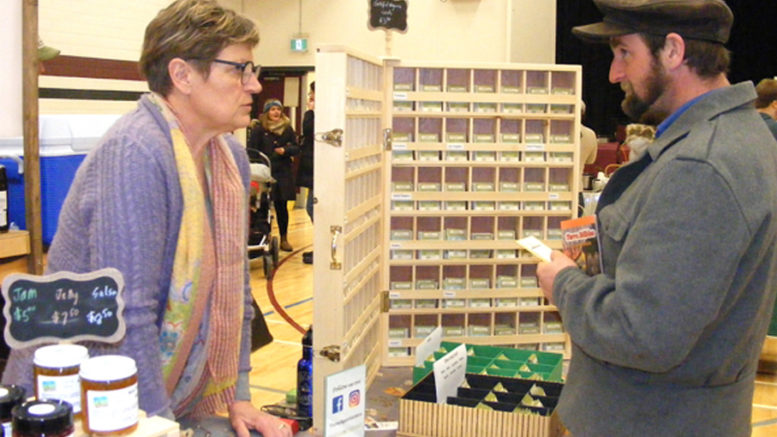 Picton event is one of 140 across Canada

For the 10th straight year, Picton became a “seedy” destination — at least for gardeners, environmentalists and people interested in preserving the natural beauty of Prince Edward County.

Seedy Saturday took over parts of PECI on Feb. 23, and from the moment the doors opened at 10 a.m., the event was crowded.

People came to trade flower and vegetable seeds at the Seed Swap Table, taste locally-grown foods and learn about growing and protecting trees from Derick Greenly of Summergreen, how to collect seeds from Vicki Emlaw of Vicki’s Veggies and the use of vermi-composting (using worm castings in compost) from Blair Richards-Koeslag, manager of Golden Bough Tree Farm. 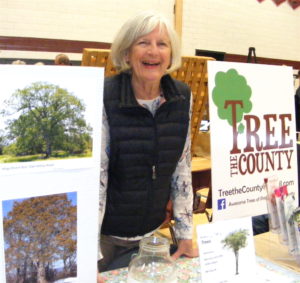 There also were 30 vendors and crafts for all ages. Wendy Chapman of Wellington was the lucky winner of a raffle for a $60 rain barrel from the County Sustainability Group (CSG). Raffle proceeds are going to the CSG’s Young PEC Organic Farmers Bursary program.

Seedy Saturday is run by a charity called Seeds of Diversity, and is intended to get people involved in saving the many different seeds that are otherwise going to be lost forever. There are now 140 Seedy Saturdays held across Canada, said volunteer and former county resident James Heap, of Stirling, and the importance of this work is increasing all the time.

“We’ve lost 85 per cent of our biodiversity just in apples!” Heap said. “We’ve lost 91 per cent of field corn. It used to be that all the farmers collected their own seeds and these were planted again.”

But now, he explained, seeds are centralized at seed companies, and the diversity has decreased alarmingly.

“With changes in local weather, it’s become very important to collect, save, store, cultivate and save seeds.” he said.

More information about Seeds of Diversity can be found online at seeds.ca.

Another area where biodiversity is being lost is in forests, farms and private yards. Many native trees are being replaced by non-native imports, forests are becoming less varied and trees are being cut down for development or for a change in land use. A group called Tree the County is in the process of doing a county-wide inventory of all trees, native and non-native, found here, with the focus on raising public awareness of the importance and benefits of trees and conserving and enlarging the county’s tree canopy. It began in the summer of 2018 and will resume this summer, said member Susan Banks, of Cressy.

She said many people stopped by the booth on Saturday.

“A lot of people want to tell us about their trees.”

“People get quite attached to their trees!” The group is holding a “Caring For Your Trees” workshop from 10 a.m. to 2 p.m. on Saturday, April 27, just outside of Picton. The cost is $20 per person and people can get more information or register for the workshop, or to get details about this group and how to participate in it, by e-mailing treethecounty@gmail.com. People can also check out the group’s Facebook page, called Awesome Trees of Prince Edward County.

If you missed the Picton Seedy Saturday, there are others coming up across Ontario, including in Kingston this Saturday at Loyalist Collegiate Vocational Institute, 153 Van Order Dr. and in Peterborough Sunday,March 10 from noon to 5 p.m. at Emmanuel East United Church in Peterborough