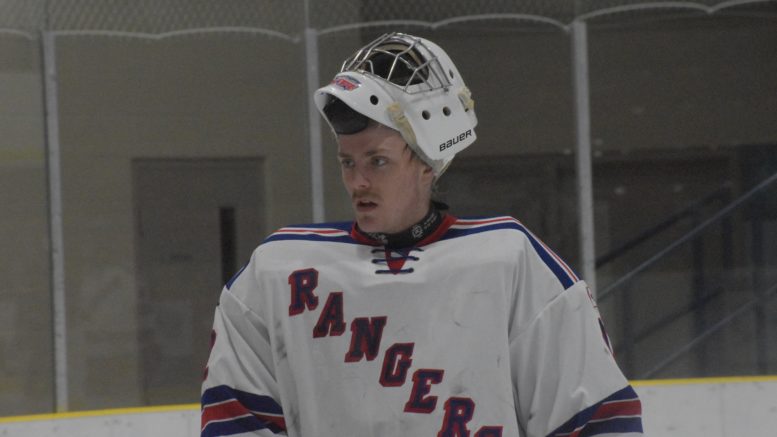 A Prince Edward County native is the best puck stopper in Ontario’s Junior A hockey world.

Jett Alexander was announced as the 2018-19 recipient of the Top Goaltender award in the Ontario Junior Hockey League (OJHL) on Monday.

The North York Rangers netminder led the 22-team OJHL with a 1.67 goals-against average and .945 save percentage.

The OJHL’s Top Goaltender is awarded the goaltender with the lowest goals against average during the regular season.

Goaltender of the Year, which is voted on by a panel of OJHL general managers and media personnel, will be announced later this spring although it would be difficult to argue Alexander isn’t the front runner in that category considering his gawky and record breaking statistics.

With Muise dealt to the Bonnyville Pontiacs in Alberta, the job was full-time for Alexander this season. He played in 43 games, almost double his 27 appearances in 2017-18.

“I’ve played a whole lot this year,” said Alexander, comparing the past two seasons. “Definitely getting in a grove and knowing the coaches have all the confidence in me. This year, our team has been unbelievable. Best defence (102 goals against) in the league. I couldn’t do this without our seven defencemen and the core forward group we have. We have an older group and everyone knows their role and does an exceptional job at it. So, I’m pretty lucky.”

The native of Bloomfield  played his early minor hockey in the Prince Edward County Minor Hockey Association and the Quinte Red Devils program before moving to the Grater Toronto Hockey League where we tended goal for the Don Mills Flyers and North York Rangers AAA teams.

Alexander signed with the Georgetown Raiders of the OJHL in 2016 and was promptly dealt to North York during the 2016-17 season.

Alexander and other OJHL trophy winners will be honoured at a ceremony this spring.