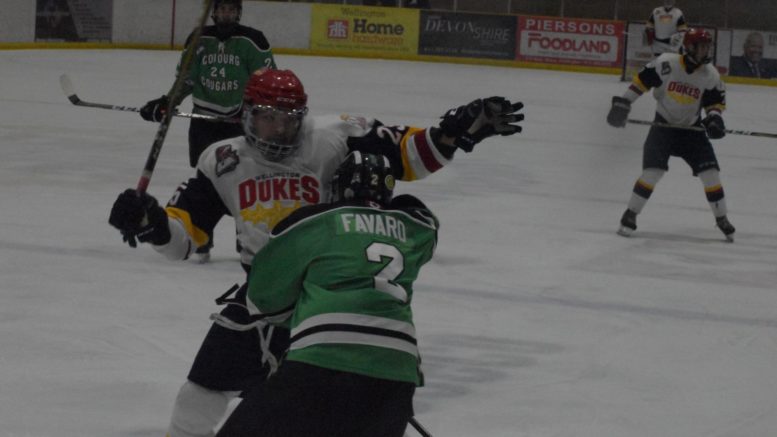 At the outset if someone had suggested the Wellington Dukes would have a 2-1 lead through three games in their 2019 Eastern Division Conference Semi-Finals against Cobourg and had yet to win a game at Lehigh Arena, any regular observer of the Ontario Junior Hockey League would have certainly raise an eyebrow and even chuckled a bit.

After all, the Cobourg Cougars only lost five home games in the 2018-19 OJHL regular season and finished the campaign ranked as a top 20 team in the Canadian Junior Hockey League so dropping their first two games at the Cobourg Community Centre to kick off the 2019 Buckland Cup playoffs seemed highly improbable if not virtually impossible. 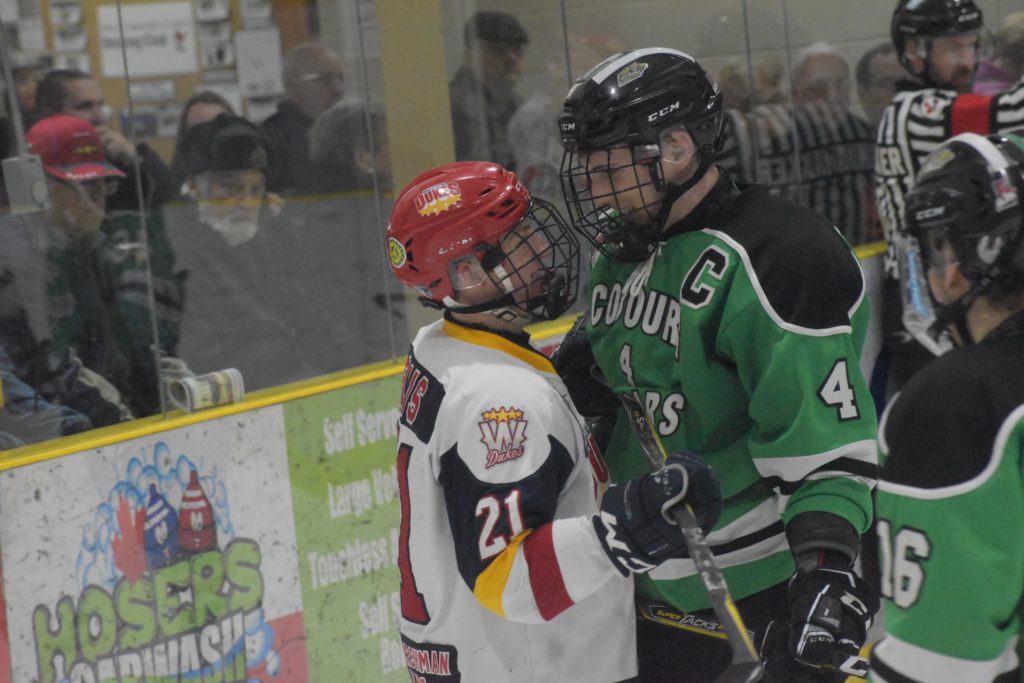 But that’s exactly what’s transpired as the road team has emerged victorious so far including Tuesday night’s Game Three where the Dukes blew the contest open as the hosts became uncorked in the late stages, attempting to soften the visitors with a plethora penalties in the third period.

Wellington scored three powerplay goals en route to a 6-1 victory on a snowy Tuesday night in which they needed to be disciplined as the Cougars tried to suck then Dukes down to their level of frustration with penalties and cheap shots in the final frame.

The team takes more than its fair share of criticism from some observers (paid or otherwise) in this community when players boil over and play undisciplined hockey.

So let this corner commend the Dukes for turning every cheek they had in the late stages of Game Three and commend them for not letting a desperate Cougars club pull them down into the tubes as the game was flushed away.

After winning the series opener in Cobourg on Saturday 5-2, Wellington faltered at home less than 24 hours later, giving up a 3-0 lead through the first half of the game only to come back with a pair of goals in the second half of the second period.

But a rare misplay behind the Wellington net by netminder Logan Bateman gave Cobourg a 4-2 lead with less than 10 minutes left in the contest and while Ben Woodhouse would get Wellington to within one with 90 seconds left,  the Dukes were unable to find the equalizer and fell by a 4-3 score.

Wellington rebounded nicely on Tuesday in a game that was delayed by 30 minutes as sections of the 401 were closed due to snow squalls.

The Dukes outshot the Cougars 19-15 in the opening frame and it was Andrew Rinaldi kicking things off at the 9:42 mark as he beat Cougars starter Dershahn Stewart to the near post and roofed the games first goal for a 1-0 lead for the visitors.

In the second, Keenan Eddy was sprung for a shorthanded marker just 2:55 into the middle stanza to make it a 2-0 lead. 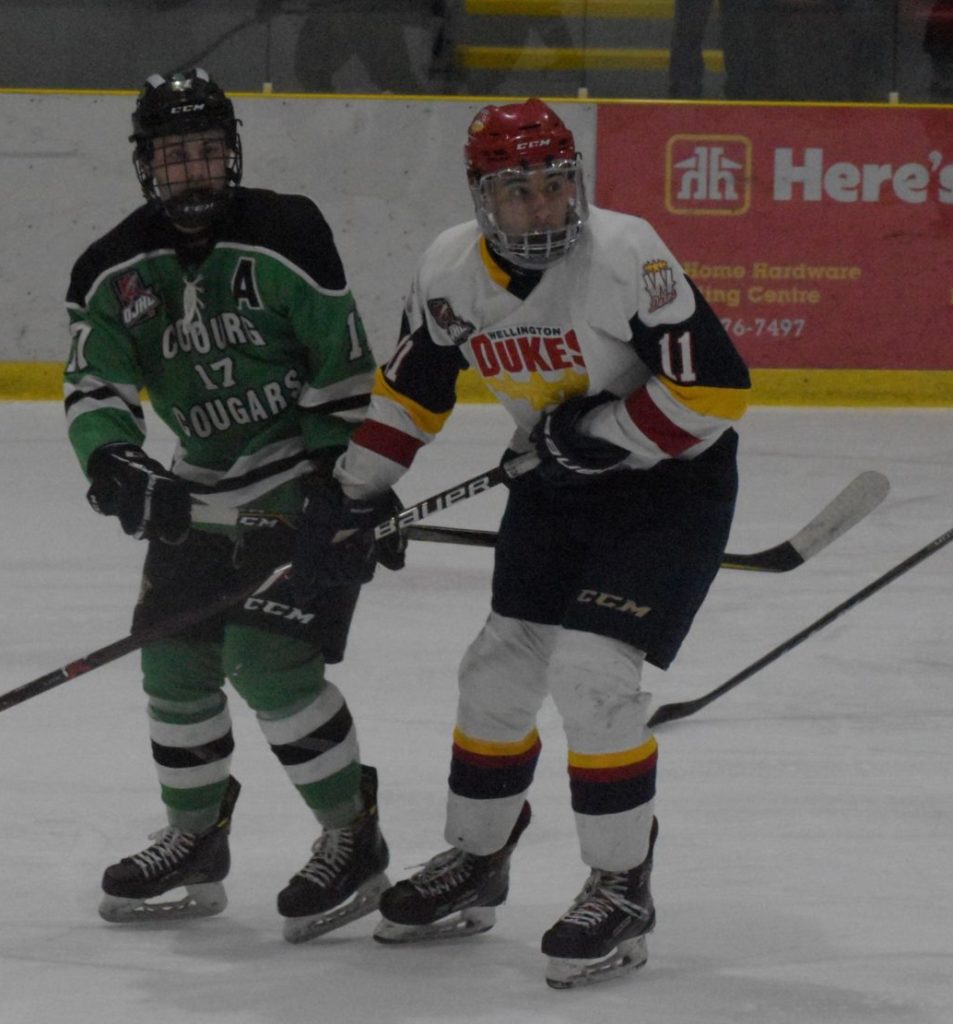 Wellington’s excellent play on special teams continued in the second as Quinn Hanna’s point blast at 10:25 made the Dukes lead three.

In the final minute of the second, Dukes captain Tim Fallowfield had a dagger that chased Stewart for Noah Featherstonehaugh Gowe and made it 4-0.

Brett Humberstone would level a Cobourg Cougar in the opening minute of the third period and get the gate for a major charging penalty that could have changed the out come of the contest.

In fact, Deaglen Small would beat Bateman towards the end of the five minute major penalty to make it 4-1 but that was as close as Coburg would get as they quickly became unhinged.

Zach Uens would set up Elijah Gonsalves and Jacob Thousand for powerplay markers at 12:37 and 16:18 respectively.

Wellington could have extended their lead further as Dan Panetta was awarded a penalty shot in the late going but was stoned by Featherstonehaugh Gowe.

In total, Cobourg was whistled for nine minor penalties in the last 20 minutes.

On Sunday, Brett Bannister, Nic Favaro and Brock Welsh all scored in the first 30 minutes of the contest to give the Cougars a comfortable 3-0 lead.

But Wellington chipped away and Rinaldi tipped a Ben Woodhouse shot on the powerplay at 12:38 of the second to make it 3-1.

Just under four minutes later, it was Uens collecting a loose puck in the neutral zone and dancing in on a partial breakaway, beating Stewart top shelf at at 16:36 to get the score to 3-2 in favour of Cobourg.

The back breaker for Wellington came at the 9:52 mark of the third when Brock Welsh stripped Bateman of the puck behind the Dukes net and sent a pass in front to Bannister.

Bannister, with some nice hand-eye coordination, batted the puck into a yawning cage to make it 4-2.

Woodhouse would collect a rebound with just over 90 seconds left and roof it past Stewart and turn the contest into a one goal game but the Dukes couldn’t muster another in tight chance in the late going of the third period.

In Game One the series first goal came off the stick of Dylan Massie as Wellington struck on the powerplay at the 5:05 mark of the opening period.

Tyson Gilmour made a nice feed to Massie in the slot and Wellington was up a single just a handful of minutes into the seven game set.

That lead was doubled at 10:47 as Woodhouse took flight and manoeuvred from his one blueline to the Cobourg slot and ripped a wrist shot past surprise starter Featherstonehaugh Gowe.

The Wellington onslaught continued and just under two minutes later it was Rinaldi making a smart pass from behind the Cougar net to Frank Vitucci who scored his first of the playoffs at 12:34 of the first.

Cobourg got back into the game in the second with a Jamie Engelbert marker from the lip of the crease at the 10:01 mark of the middle frame.

The Cougars would inch closer to Wellington in the third Coleton Cianci beat a partially screened Bateman just 2:03 into the final stanza.

Bateman would have been wise to kiss both posts and anything else that got in Cobourg’s way in the rest of the period as the puck tickled the iron a couple of times and the goalie needed his best crease calisthenics over the final 17 minutes.

Finally, with Stewart pulled for an extra attacker, Gilmour’s attempt at a yawning Cougars cage with just under a minute left hit iron on the host’s net and a streaking Panetta was able to seal the Wellington win.

Dukes defenceman Joe Roy would bag another empty net goal just ten seconds later to put the Game One to bed for good.

Wellington will host the Cougars on Thursday night at Lehigh Arena and then head back to the CCC for Game Five on Friday evening.