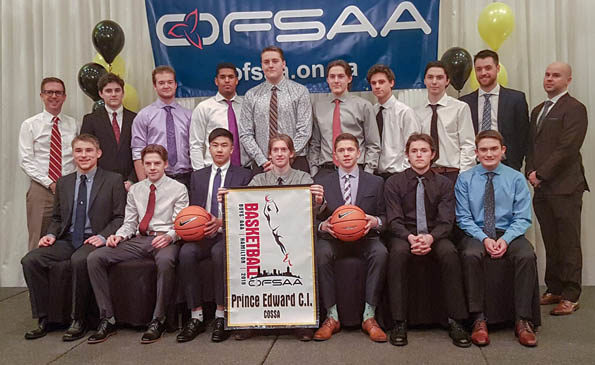 Positive experience -The PECI Senior Basketball Panthers went 1-2 at the OFSAA AAA championships, but held tough in games against two of the top three ranked schools in the province. (Jason Parks/Gazette staff)

The PECI Senior Basketball Panthers went 1-2 among the top AAA schools in the province this week in Stoney Creek, but there is much encouragement in the details.

Sandwiching the program’s first win at the provincial level, a 54-40 triumph over the St. Mary’s College Knights from Sault Ste. Marie Monday evening, the representatives of the county’s small AA school hung in well for a half against two of the province’s best teams in Hamilton’s third-ranked Cathedral Catholic Gaels and first-ranked Pine Ridge Pumas from Pickering. 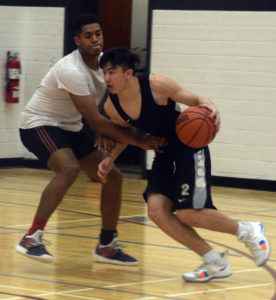 Contributors – Seen here in practice leading up to OFSAA, Alex Arsenault, left, and exchange student Owen Wang put up points for the PECI Panthers during their provincial games this week. (Adam Bramburger/Gazette staff)

Early Monday morning, the Panthers stuck to a ball-control game plan to counter the athletic, quick-moving attack of the Gaels as they trailed by just 15 points through eight minutes. Their opponents managed to kick the game into a higher gear when it counted and left the Panthers scrambling to match them at a high tempo in an 75-37 loss.

“They cranked up the defence and we got away from our game plan. Our guys wanted to be something we weren’t and it cost us,” coach Rob Garden said.

Alex Arsenault led the scoring with 11 points and Taiwanese exchange student Owen Wang chipped in five. Garden said the Panthers got good energy off the bench.

Against the Knights, Arsenault showed his tenacity and skill with a 24-point outing as the Panthers pulled away in the second half to win. Logan Stark chipped in eight, including two momentum-building three-pointers. At one point in the second quarter, the Panthers held a one-point lead. Arsenault made a big basket, then stuffed a shooting attempt defensively to start breaking away.

“The turning point in Game 2 was Alex taking over in the second quarter. He was a man among boys and the rest of the guys fed off his energy,” Garden said.

Beyond that, the hallmark of PECI basketball shone through.

“Our defence was really good in the second half. The guys were very disciplined and stuck to the game plan, which didn’t let St. Mary get any momentum,” the coach added.

Learning their lesson from the Cathedral game, the Panthers came to play hard Tuesday morning against Pine Ridge, led by their big three scorers Arsenault, Devon Wilton and Brodie Byford. With them leading the way, the Panthers were up 19-15 after one quarter.

The powerful Pumas regrouped, however, and took control in the second, posting a 40-31 advantage at half. Their depth was just too strong, however as 11 different Pine Ridge players found the score sheet and the Panthers lost some of their most effective players to foul trouble. Both Arsenault and Byford reached four, while Wilton fouled out. When the output from the balance of PECI’s roster totalled five points , it is easy to see how their minutes were missed.

“We had foul trouble and got beat by a better team,” Garden said.

Byford contributed 19 points, Wilton 14, and Arsenault 12. “Our big three were our big three. It was great to see them finish so strong and all have the possibility to return,” Garden said.

Reflecting on the three games, Garden, who coached the team with community volunteers Taylor Reddick and Caleb Hugh, said it was a great first OFSAA result. He said he was proud of the way the players battled and he believes the experience will pay dividends in the future as a healthy core could be back on the court for next year.

The 20-6 Panthers staked claim to a COSSA championship, alongside the senior girls who also represented the school at OFSAA in the fall at the AA level. Garden said it’s a rarity for any school to have both programs compete provincially in a given year. He thanked the many generous sponsors who supported the trips.