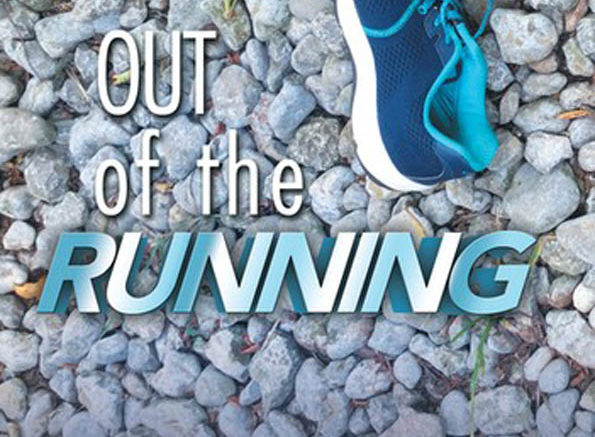 Fresh on the shelves -Robin Timmerman’s fifth title in a mystery series featuring Pete and Ali Jakes, Out of the Running, is now available at book stores and libraries. (Submitted photo)

Robin Timmerman just couldn’t stand being without Peter and Ali Jakes and their sleuthing escapades any longer — and, luckily, she is the one woman who could do something about that.

The county author introduced the young police officers in her County Reads-winning mystery debut The Pity of the Winds in 2011. Then, they were tasked to solve the murder of a worker who fell from his death on a wind turbine in the rural Ontario community of Middle Island, which bears a striking resemblance to Prince Edward County.

Timmerman’s characters returned for other instalments in the series, 2013’s Season of Deceit, 2014’s Crimes of Summer, and 2016’s Threat of Autumn. But then, the Canadian Afghanistan conflict veteran-turned-police officer and his immigration wife hung up their magnifying glasses for a while. Now, they’ve returned to Middle Island in Out of the Running after Timmerman said she felt an urge to see what they were up to a few years later.

“I seemed to be getting the stories out quite quickly. I took a break and then I felt the itch again and this resulted,” Timmerman said. “That itch is very important. That works away in your mind for quite a while.”

From start to finish, this instalment probably took about a year to write, Timmerman said, adding she never plans her plots in advance, choosing to let the story go in its own direction. She gets ideas anywhere she goes and studies people.

“Putting a book together, ideas come from different places and you put them together. I find that once I get rolling, events take over. I don’t know when I start where it’s going to go,” she said. “I write most days and get organized as I go along. There’s always surprises, which is fun.”

Timmerman said she picked the Jakes as her protagonists because she wanted to write about fairly young people and wanted to move away from the typical hero of British detective fiction of a “50-year-old, burnt-out, thrice-divorced fellow.” That, she said, seems to play well with audiences.

“They’re a modern, young couple and they have their difficulties and challenges throughout the books,” she said. “People seem to like their relationship and their daughter is older now.”

Other supporting characters, like a veteran police chief and a new recruit in his 20s with his own love interest, also offer chances for storytelling and character development. Naturally, there are some new possible villains too.

The plot for Out of the Running — which can be read as a one-off without knowledge of the previous books — is set in June with an Island Marathon that aims to raise money for the local hospital. The island community experiences an influx of tourists around the time of the race and that becomes a headache for Pete Jakes and his peers — especially when bodies start to appear along the race course.

Timmerman is interested to see what people think and how they piece together the clues.

“I usually tell people (my books) are not cozy, but they’re not gory. I hope there’s some suspense and mystery,” she said. “I have fund writing these. I’d encourage anybody who has got that book in the drawer to get it out and give some feedback… I have loved getting audience reaction, it’s one of the big thrills of writing.”

Out of the Running is available at Books & Company, through the County of Prince Edward Public Library, or online through publisher Trafford Publishing, Chapters/Indigo, and Amazon in print and electronic formats. Timmerman will also have a launch event at the Picton library branch March 21 from 4-5 p.m.