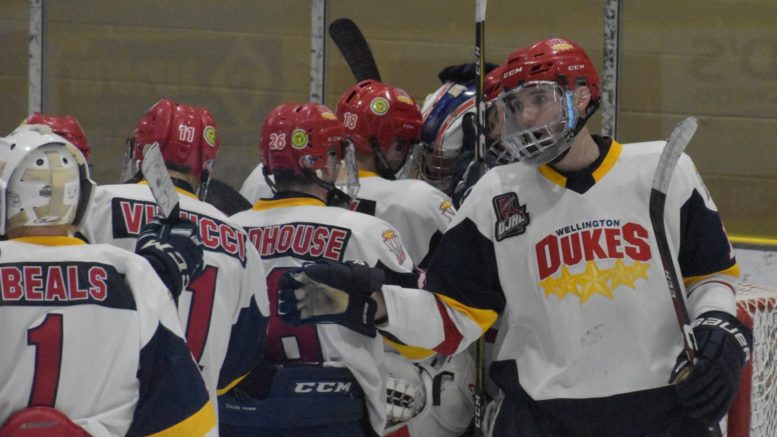 It wasn’t their cleanest effort of the season but the Wellington Dukes moved into a clinch position on Thursday night with a gritty 5-4 win over the visiting Cobourg Cougars.

Despite being down 3-0 five minutes into the first period, Wellington never wavered and made the Cougars gag on a 4-2 lead their East Division Semi Finals opponents held with under seven minutes left in Game Four.

It was a wild final frame at Lehigh Arena and while the rink has been the scene of some scintillating playoff magic in recent years, it’s hard to a recall a game where Wellington looked destined to lose a second consecutive 2019 Buckland Cup game at home. 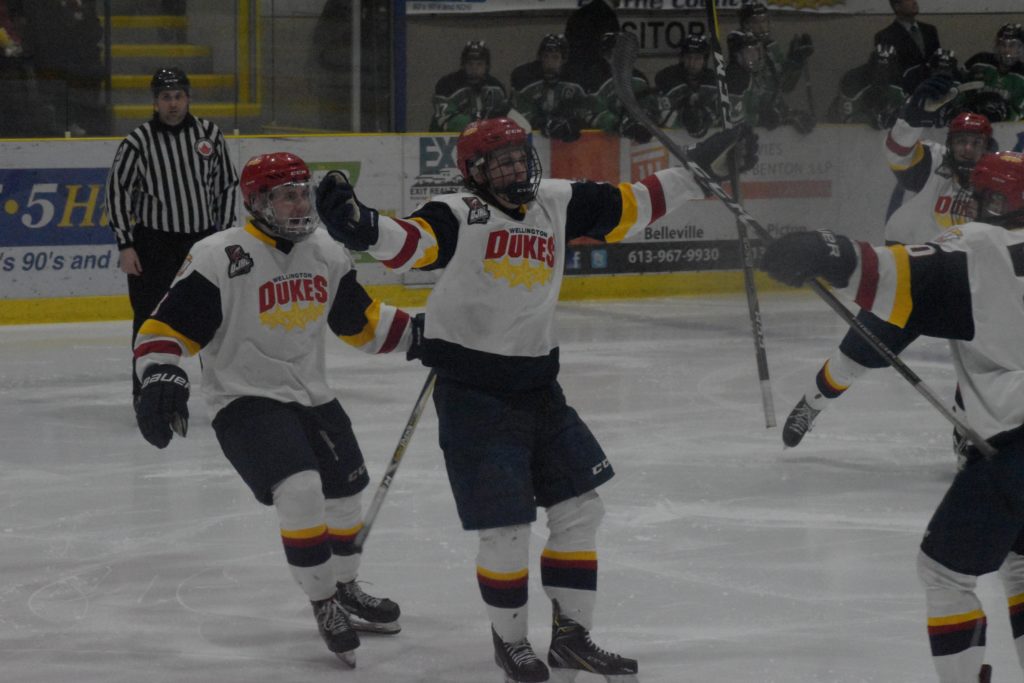 Much will get made and ultimately be remembered about Wellington’s final two goals in the last two minutes of the hockey game when this memorable contest gets talked about in years to come.

What will be probably get lost but shouldn’t is the goal Dan Panetta scored 57 seconds into the third period to get the Dukes to a 3-2 deficit.

The Belleville native has scored bigger goals for the Dukes (Who could forget the clinching goal in in the 2018 Royal Bank Cup Semi Finals?) but his top shelf effort after skating in from the half wall past Cobourg netminder Dershahn Stewart achieved a pair of tasks.

It gave the Dukes the momentum they needed to start the comeback bid and it rattled the Cougars and Stewart in a way that paid dividends later in the frame.

Down 3-2, Wellington would still stumble in the period as a Ben Woodhouse interference penalty far away from the play wouldn’t go unnoticed and would lead the Cougars to a much needed powerplay goal off the stick of sniper Brock Welsh at the 8:21 mark.

But the way Wellington was starting to the buzz the Cougars net and the manner in which pucks seemed to be bouncing off Stewart must have been unnerving to the Cobourg squad.

Down 4-2, Wellington would start the hill climb with 6:43 left in the contest as Quinn Hanna’s point shot was deflected above the hash marks by Andrew Rinaldi and skipped past Stewart to make it a 4-3 game in favour of the visitors.

Physically, there was likely no bigger player than Hanna in the Wellington lineup on Thursday night and the same could certainly be said about the Peterborough native’s offensive contribution.

With a shell shocked Cobourg club trying to nurse a one goal game along, Hanna would drop the boom on the Cougars at the 1:42 mark as his point blast went through a maze of legs and beat Stewart to tie it up at 4-4.

At that point, it seemed practically Calvinist that Wellington would find a game winning goal goal before the end of the period.

How he ever was able to get so alone at the far side of the ice is still a mystery but, with 52 seconds left, Elijah Gonsalves was as the puck was won off a draw by Tyson Gilmour back to Hanna.

A Hanna slapper would be stopped by the Cobourg goalie but the rebound would wind up on the stick of Gonsalves who had plenty of time and space to roof the puck past a prone Stewart and give the Dukes their first lead of the hockey game.

The Cougars would lift Stewart in the final minute but never really challenged Wellington netminder Logan Bateman who valiantly shook off goals by Mac Lowry, Riley McCutcheon and Welsh in a five minute onslaught at the start of the game to pick up his third win of the post season.

Wellington will head to Cobourg on Friday night to try and wrap up the series in five.

If Game 6 is required, it will be played on Sunday afternoon at 2 p.m. At Lehigh Arena.