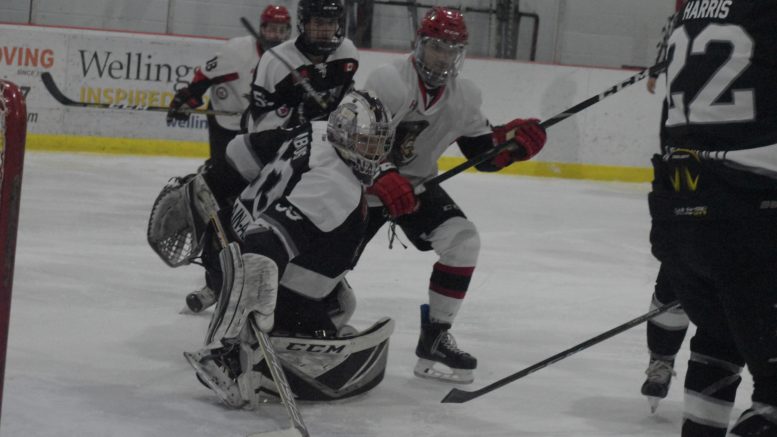 Picton Pirates forward Griffen Conger closes in on Napanee Raiders net minder Nicholas Nabuurs during the second period of Game Two of the Tod Division finals. Nabuurs made 23 saves for his fourth shutout of the 2019 PJHL playoffs. (Jason Parks/Gazette Staff)

The Picton Pirates were slow starters against Napanee in the 2018-19 Provincial Junior Hockey League regular season, losing the first three games before figuring out the Raiders and winning the last three to split the six game set.

But if Picton is thinking they have room to work with against one of the best PJHL teams in the 63 team league, the Pirates might want to inject some urgency into their game prior to Game Four scheduled for Huff Estates Arena Sunday evening.

The Pirates find themselves down a pair after dropping Games 1 and 2.

On Wednesday, Picton was able to keep up with the Raiders through most of the contest and were tied with Napanee 2-2 into the third period thanks to a pair of goals off the stick of Nate Boomhower.

The Belleville native was able to beat Napanee starter Nicholas Nabuurs 4:06 into the final frame but a three goal explosion by the Raiders would seal the win for hosts.

Another pair of former Dukes would combine for a clutch insurance goal at 8:59 as Austin Labelle fed Brodie Maracle to make it 4-2.

Raiders superstar Ryan Casselman would put his stamp on the game with less than two minutes left, beating Picton starter Kyle Renaud for a hat trick goal and finalizing the score at 5-2.

Picton was outshot badly 39-16 by the hosts and that trend continued the next night on home ice.

The Pirates would go 0-for-11 on the powerplay and get out shot 41-23 as the visiting Raiders systemically dismantled the Pirates 6-0.

Harris’ second of the series scored on the powerplay at 1:31 would stand up as the game winning tally.

Casselman would score a pair in the frame to make it a 3-0 lead for the Raiders.

Picton, who showed well for a good portion of Game One, will look to rebound on the larger ice surface of the Strathcona Paper Centre on Saturday in Game Three.