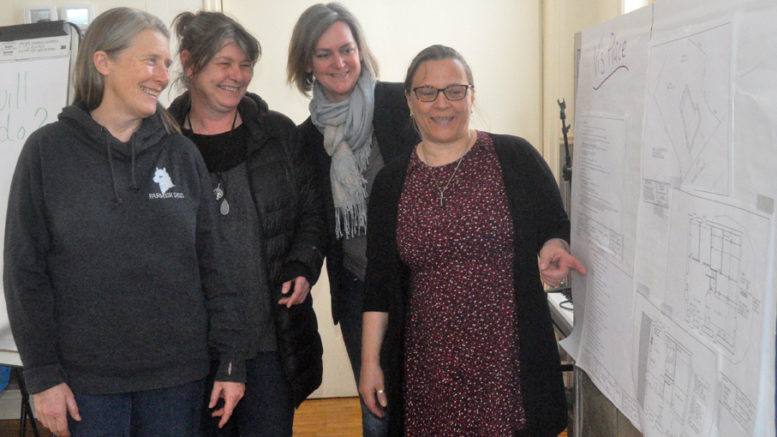 Organization discusses how its vision for offices, housing, and shelter fits ‘Balance for Better’ theme

Alternatives for Women marked International Women’s Day Friday by sharing detailed drawings of a project it believes exemplifies this year’s theme of “Balance for Better.”

In a chili luncheon at St. Mary Magdalene Anglican Church, the counselling and support organization showed off blueprints and photos of Vi’s Place, a downtown Picton home that could house the agency and a number of precariously housed women as soon as this summer.

Executive director Rahno Boutilier told an audience of about 30 people that single women tend to dominate waitlists for social housing in Prince Edward County and elsewhere because they don’t have children or they have adult children. With market rents of $1,200-$1,400 for a single bedroom in the county outpacing the financial capacity of most single-income households and being completely out of the ballpark for Ontario Works or Ontario Disability Support Program recipients, a lot of women find they don’t have much choice but to stay in less-than-ideal arrangements.

“This project is trying to help these most vulnerable people in our community os they have an opportunity to live lives free of violence and to make a plan for what they want to do with their lives in the future,” she said. “We know one of the biggest reasons women stay is due to finances.”

To address the issue, on the upper floor of the century home, Alternatives For Women will create three self-contained spaces for single women in its Kiosan second-stage housing project for up to a year. That’s a pivotal service as of the 250 abused women the organization serves each year, about 20 will move in.

The renovations will also create one apartment unit for longer-term geared-to-income rent in the basement.

“It increases the affordable housing inventory by a small margin,” she added.

Boutilier said the project has been a long time coming with Alternatives for Women searching for over two years to find a home that could meet their needs. They struggled to find something that was affordable, until a connection was made with the Courtney family about two years ago.

While their aunt Violet had passed away in 2017, they wanted to ensure her legacy of kindness would live on. Instead of selling the three-floor home to a developer who would charge high rents, they wanted it to help in the community and they were willing to resist offers until Alternatives for Women could purchase it.

The Parrott Foundation gave $250,000, and Investment in Affordable Housing For Ontario grants offered another $97,000. The organization also sold a single-family house on King Street because the space wasn’t suitable for the single women that typically ended up housed there.

It took time for the not-for-profit to do as staff and board members quickly found it was a bigger task than they had been anticipating.

“It has been a huge learning curve. In our naivety, we thought we could just buy a house and renovate it like we were moving in, but we have all these checks and balances we have to answer to,” Boutilier said. “People have been very helpful and generous with their time, enlightening us and helping us to move along.”

To start the project, the home was gutted inside down to the studs in order to get an accurate quote on the work that had to be done. Space in the basement was dug for the one-room apartment. Remaining work includes framing, finishing, and working on electrical and plumbing systems.

“We’re looking for this to be done and ready for move-in by July 31,” Boutilier said.

That move in will include Alternatives for Women’s counselling areas and administrative offices. While there may be some concern about stigma or safety, Boutilier said it will be a secure, welcoming environment.

“We don’t announce the location, but it’s generally known around town. The argument goes on and on, some say the more eyes on the place the better,” she said.

“Every time you do an education piece or meet with someone, you run the risk of people knowing. Both (Vi’s Place and Alternatives’ existing six-unit apartment building) are secure buildings with cameras, locked doors and access to a 24-hour crisis line.”

Vi’s Place also hosts a milestone space for a one-room emergency shelter. Alternatives chair Caroline Granger said she’s been waiting 20 years for such a development, adding that each year between 20-40 women refuse to go to shelter in Belleville or elsewhere because they can’t leave family, employment or other supports.

During Friday’s event, Boutilier and counsellor Kelly Knott also led a discussion about the Balance for Better theme and what it means. Knott instructed participants to speak with others about how to make the world better. Equal pay and equal representation in the workforce were recurring themes. Another participant suggested that example setting for children could play a role in gender balance.

Lorna MacDonald, an Alternatives counsellor brought up an interesting discussion about the manner in which former attorney general Jody Wilson-Raybould appeared to be treated by Prime Minister Justin Trudeau and the example that sends when a qualified, experienced women doesn’t appear to get the respect she deserves at the highest levels of government.

Boutilier said the decisions of the provincial government in the past year were also troubling.

“The government stopped the increased funding to sexual assault centres and cut the provincial violence against women roundtable — that roundtable needs to be there so they can hear what is happening on the ground” she said. “They put a stop to the basic income pilot project and income and finances is the leading cause of domestic violence. It causes stress and strain on the family that causes it to fracture. We need to do something about that and we need to be heard. Services need to be there for women.”

In conclusion, Boutilier said the beset way to help vulnerable women is to “be seen and be heard” while promoting opportunities for all.
Also, at the luncheon, women were invited to sign a petition to stop the forced sterilization of Indigenous women in Canada.