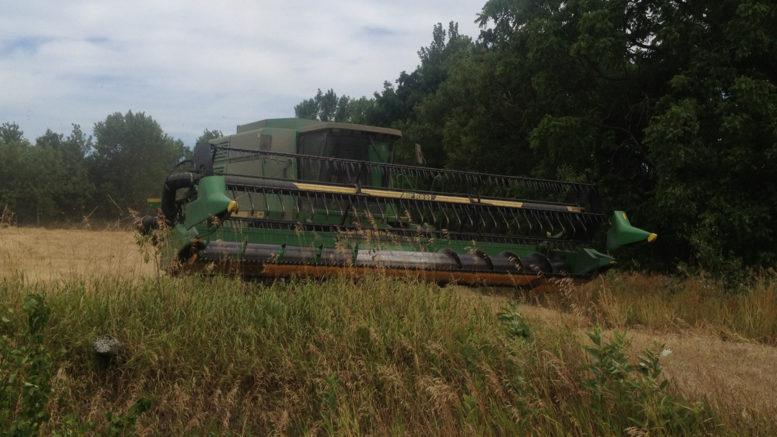 Tax break - Owners of property designated in the farmland class in Prince Edward County will receive a break after councillors elected to drop their tax ratio from 0.25 to 0.2319 this year. (Adam Bramburger/Gazette staff)

Prince Edward County will be providing some relief to its farmland taxpayers this year.

Sandwiched between the hubbub over the Picton Town Hall, Tuesday, councillors voted 6-4 to reduce the farm tax ratio from 0.25 to 0.2319, effectively leaving keeping the percentage of taxes paid by that class to 2.22 per cent of the municipal tax levy as it was in 2018. In actual dollars, $65,120 for that class — $16.09 per $100,000 in assessment. To accommodate that shift, other tax classes will bear the brunt with residential taxpayers facing an increase in $1.58 per $100,000 of assessment.

Hillier councillor Ernie Margetson was among those not supporting the tax shift. He said a majority of the farms on his road are owned by non-farmers, so the break isn’t just helping those farming lands.

“I see this shift assisting a lot of farm property owners that aren’t farmers. I don’t support that,” he said.

Instead, Margetson said he’d like to see the County expand or enhance its granting program to capture farmers who might not have qualified under terms of the program.

“There are a number of farms in North Marysburgh that are not farmed,” he said. “I believe there was a deputation at the beginning of budgets that suggested rather than targeting new and young farmers, we might look at other people who are perhaps as needful.”

South Marysburgh’s John Hirsch said he’d be willing to look at the grant programs, but said no proposals of that nature were before council. He also said that in consulting with farmers, he’s learned more about their issue with increasing taxation. The Municipal Property Assessment Corporation (MPAC) has brought in market value assessment over a four-year window and valuations have seen farmland taxation increase greatly. It has also changed the portion of tax farmers pay the municipality.

Before the shift, Hirsch said before the changes, that tax class paid between 1.6-1.7 per cent of the tax bill. This year, without some course change, the burden would jump to 2.39 per cent.

“We should move back to the numbers as they were, we’re disadvantaging the people who do own that land,” he said.
Ameliasburgh’s Janice Maynard agreed, stating the request came from farmers through the Ontario Federation of Agriculture and, even on rented land, the lower tax may reduce pressures to increase rental rates. She felt the proposal to keep the farmland percentage burden the same was well framed.

“Farmers already pay substantially more than they did in the past, so I think this is an equitable and fair request. Once we get into a new assessment cycle, things will work themselves out and this reduction will no longer be needed.”

Mayor Steve Ferguson said he simply could not support the change.

“I can’t support moving dollars from one tax class to another tax class. We heard from people speaking tonight about the burden of increased taxes, but I’m more concerned about the principle this will set when MPAC goes after another tax class in 2020 or 2021 and that group wants to shift the burden onto other classes, including farmers. I can’t support any reduction from the .25 that is currently in place.”

The mayor called the prospect “dangerous” and added he, too, would rather see the farming grant program tweaked to better serve members of the agricultural community that truly need help.

Ameliasburgh’s Andreas Bolik countered that farmers also have farmhouses and pay residential taxes on two acres, so farmers were already going to be asked to pay for some of the shift. He also argued providing help for one year won’t lock council into doing the same in the future.

Maynard concluded that over 20 other municipalities have made similar decisions and, for that $1.58 extra on $100,000 of residential assessment, it wasn’t going to be particularly onerous for others.

“It’s a gesture to the farm community that we value what they bring to the community,” she said.