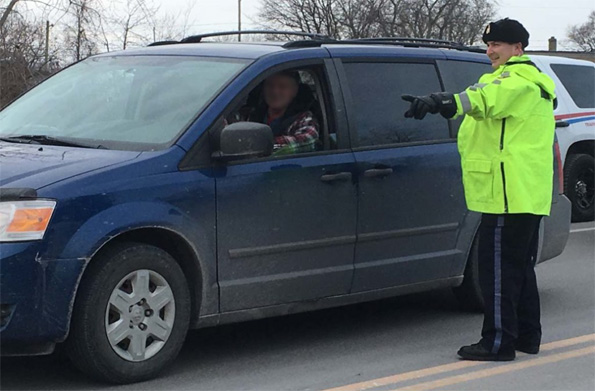 Staying vigilant - Staff- Sgt. John Hatch sends a sober driver on from a RIDE check on Hwy 62. He said last year the number of impaired driving arrests his detachment makes is too high, yet through the first three months of 2019 arrests are trending up. (Adam Bramburger/Gazette file photo)

Alcohol a factor in all eight charges laid this year

It appears Prince Edward County motorists still aren’t getting the message about getting behind the wheel while impaired.

During the kick-off to last year’s Festive Ride campaign, local OPP detachment commander Staff-Sgt. John Hatch expressed his disappointment that his detachment had a 20-per-cent increase in impaired driving arrests in 2018 over 2017. Early returns for 2019 are looking even less promising.

The Prince Edward detachment’s community safety officer Const. Patrick Menard told media through the first three months this year, officers have laid 33 per cent more charges than in the same time period a year ago. He also made it clear recent changes in laws governing recreational drug use have not been factors.

“This is not related to the legalization of cannabis, with all eight impaired occurrences being alcohol related,” he said.

Through November last year, the detachment laid 43 impaired charges, though during the Festive Ride campaign, it reported no charges and just three suspensions for registering in the warn range. Come the new year, the problem has returned.

Speaking to the Gazette in December, Hatch said drivers have to take personal responsibility to not be on the roads.

“For yourself, if you suspect you might be impaired through something you’ve taken, through drinking or drugs, the answer is simple — don’t drive,” he said, while suggesting other drivers and road users should call 911 if they suspect another driver is impaired.

Menard added the OPP is reminding drivers no amount of alcohol or drug is safe while driving.

Menard was prompted to release the alarming data after an incident March 7 on Bloomfield’s Main Street. An officer stopped a vehicle travelling at a high rate of speed. An odour of alcohol was detected on the driver’s breath and a roadside screening test confirmed the suspicion. A 35-year-old Wellington man was arrested and charged criminally for having a blood alcohol content above 80 mg while operating a vehicle. The driver was also cited for infractions of the Highway Traffic Act and the Liquor Licence Act. He is slated to appear in Picton court April 10 to face the charges.