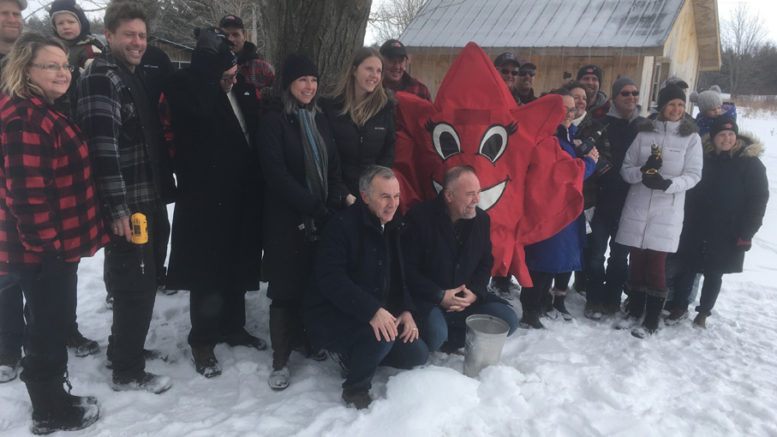 A sweet Scene Prince Edward County maple syrup producers and dignitaries pose for photos with Mabel the Maple Leaf Friday at Loha Farms to promote the 18th Maple in the County weekend March 30-31 There are 13 sugar bushes participating with a wide range of family activities. (Adam Bramburger/Gazette staff)

18th annual festival to bring up to 15,000 visitors to sugar bushes

The county’s maple producers are watching the weather forecasts closely, hoping they’ll have sap running before their sweetest weekend for visits and sales.

An extended cold spell leading into March has backed up syrup production this year compared to a number of early runs in recent memory. Maple in the County chair Ron Hubbs was able to joke a bit about the more traditional season last Friday, though he was likely hiding a bit of nervous energy. 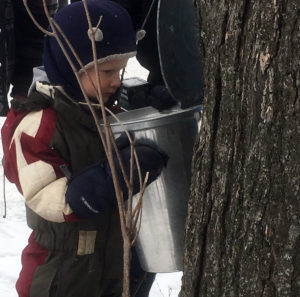 Set for sap start – Sam Bakker hangs a pail to collect maple tree sap after taking part in a ceremonial tap at Loha Farms on Luck’s Crossroad Friday in advance of Maple in the County. With cold weather lately, syrup producers have been hoping for some warmth to get the sap running for their season. (Adam Bramburger/Gazette staff)

“With the cold weather, I was just wondering if there’s anybody in the room looking forward to warmer weather in the next 10 days or so,” he said, while kicking off the 18th edition of Prince Edward County’s largest festival at Loha Farms. This year’s event runs March 30-31.

Hubbs said he pegged last year’s attendance at about 15,000 conservatively given that some sugar bushes had individual crowds of 1,700 daily for pancake breakfast. Of course, two days of nice, sunny warm weather also did the trick for visitors and producers alike.

Maple in the County was the first driving festival in the province where visitors were able to go from sugarbush to sugarbush. Along the way over the years, Hubbs said each operator came up with their own unique flavour — both in the syrup they produce, but also in the event they put on. For example, visitors might like to visit Nyman Farms on Mowbray Road for its petting zoo, or Walt’s Sugar Bush near Consecon for its live music. Whatever visitors’ tastes, the producers found it’s best to work together.

“You would think as a maple syrup producer, you wouldn’t want to be helping the guy that’s trying to sell syrup not too far from your place, but we have discovered by holding this festival, we all sell more syrup. We can compete friendly with one another and help one another.”

This year, there’s 13 different sugar bushes on the tour, ranging from entries like Vader’s, a family that has produced since 1910 to Fosterholm Farms, the county’s largest producer with over 7,500 taps. This year, Jubilee Farms on White Chapel Road is a new addition and it’s menu offers a fresh twist on the tradition by serving buckwheat pancakes and other gluten-free treats.

Loha operators Chris and Jesse Armstrong have been expanding their sugar operations over the past four years on their hobby farm. They’ve also started a partnership with the Prince Edward County Hospital Foundation to do a benefit each of the past three festivals. This year, the money will be earmarked for the Back the Build fund for the new hospital campaign.

“It’s a sweet story and we’re really happy to be a part of it,” the foundation’s executive director Shannon Coull said before ceremonially tapping a tree at the farm.

Mayor Steve Ferguson picked up on that health theme as he talked about the superfood maple syrup as not just a tasty treat, but also a healthier alternative to white sugar.

“A quarter-cup of maple syrup has 205 calories, that will burn off in a half-hour walk,” he said. “It provides 100 per cent of the daily requirement of manganese. That helps lower cholesterol and sharpen mental acuity. We consume a lot at Shire Hall.”

Ferguson added the other elements in natural maple syrup also help lower blood pressure and aid in heart health, while being much lower on the glycemic index than white sugar.

Hubbs, who used International Women’s Day to talk about how women originally were the harvesters of maple sugar before men got involved with evaporators and eventually both sexes were seen as equal partners, said the year’s first harvest goes back to Indigenous peoples who amazed European settlers when they didn’t get scurvy — a feat often attributed to their syrup consumption. He said Indigenous women were known to gather and store 120 lbs of sugar each year for each member of families. Consumers today eat about 140 lbs of sugar on average.

Naturally, the two-day festival and unofficial kick-off to the tourist season also provides a shot in the arm for the local economy.

“I want to reiterate how important this event is for the county and how terrific it is for people to experience the products you produce. I want to thank you very much for doing this for so many years,” Ferguson said.

Information on events at the 13 sugar bushes, additional activity locations, and free skating and movies during the Maple weekend are available online at www.mapleinthecounty.ca.