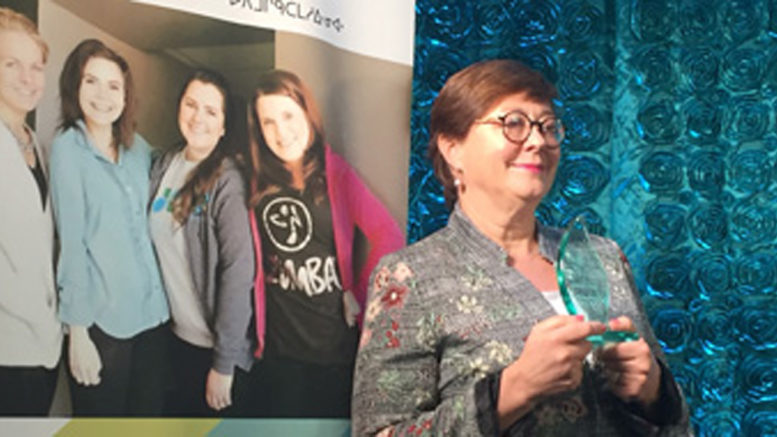 Achievements acknowledged - Alexandra Bake receives her award for exemplary entrepreneurship at the PARO Biz conference in Huntsville, Ont. Thursday. Bake was nominated by her peers for her work with the Gilbert & Lighthall Marketplace. (Submitted photo)

Well known in Prince Edward County for her entrepreneurial success on Picton’s Main Street, Alexandra Bake earned some lofty recognition among peers across the province.

On Thursday in Huntsville, Bake was recognized by the PARO Centre for Women’s Enterprise as this year’s extraordinary entrepreneur for an established business for her work with the Gilbert & Lighthall Marketplace — one of a number of positive projects she’s been involved with locally since 2005. Others include Books & Company and the Edward Building.

“I felt extraordinarily honoured, to be honest,” Bake told the Gazette. “It was my fellow PARO Circle members that nominated me for this award, so that was very moving.”

The PARO Centre started in northern Ontario and has been in operation for 25 years, growing into one of the largest organizations in North America supporting women through mentorship, economic development, and small-scale loans and grants. Last summer, Community Futures of Prince Edward/Lennox and Addington announced the movement was expanding to eastern Ontario and it held a seminar to introduce women to the model. 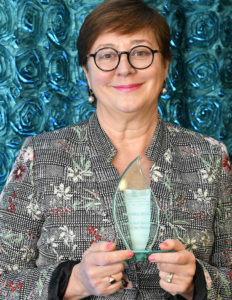 Making a difference on Main Street – Picton business woman Alexandra Bake was recognized by the PARO Centre for Women’s Enterprise as its extraordinary entrepreneur of an established business for her work with Gilbert & Lighthall. Bake’s nomination came from members of her own PARO peer circle of local female entrepeneurs. (Submitted photo)

Bake was intrigued by the concept. She and five other women set up the first PARO peer circle in this region. Since, they’ve met once a month, following prescribed rules about meeting and supporting one another in their respective businesses — all five run their own businesses. In particular, Bake said she was intrigued by the type of networking provided and the chance to mentor others.

“I went first of all because a friend of mine said she didn’t think many people were going, so we thought we’d go and see what it’s all about,” she said. “I’m the kind of person that prefers the intimate dinner party and not the cocktail party. I’ve never been big on network and going places where there are a lot of people and you enter into short conversations — they might be meaningful, but they’re not the most comfortable.”

Instead, Bake found she enjoyed the idea of PARO where she could interact with other business leaders on a deeper level and build a shared support system that draws on each member’s individual skills to help the whole group thrive. Mentorship, she said, is important.

“It’s not just a couple friends chatting over coffee. I feel mentorship, especially women to women is really important. We’re often faced with similar problem, even if working in different environments. Helping each other at the grassroots level seems to make a lot of sense to me.”

Bake added the group has already made a tremendous difference in one another’s lives.

Those relationships led to Bake’s circle nominating her for Gilbert & Lighthall based on her track record of more than three years in business while taking financial risks and giving back to the community — something she’s done repeatedly, including her recent stint as fundraising chair for the Picton library expansion.

Ultimately, business women across the province selected her submission and the supporting letters from her peers. Bake admits she was a bit surprised by the honour.

“What’s interesting for me is it’s very hard for me to define myself with one business. I didn’t think I was going to qualify. Somebody described it as being a serial entrepreneur,” she said.

Thinking about Gilbert & Lighthall, Bake said the longevity of the business in the restored heritage building is special to her given that small-town, main-street business faces challenges.

“There’s the seasonal nature (in Picton) and on top of that bricks-and-mortar retail itself is an interesting animal. People want bricks-and-mortal, they want to have stores, but it’s more challenging with the pricing-product mix, competing online and all the other elements that go into making it dynamic.”

Dominque Jones is a social finance specialist who helped initiate the PARO program locally. She also travelled to Huntsville and said the award was “well deserved. According to Jones, attracting an entrepreneur of Bake’s stature has been a coup for the developing program.

“Someone like Alexandra provides a wealth of knowledge and experience to her fellow circle members. A couple have been in business for a few years and there are also people who are new to business. Providing that membership she finds rewarding. She wants to stay engaged to provide advice to fellow circle members.”

Jones said there are two PARO circles in Prince Edward County, each forming in September 2018. She said an interesting element of the program is that for micro lending programs of up to $11,000 per member, women don’t actually apply to the PARO organization, but rather their peers are the ones approving their request.

“That way women are more accountable to their plan. The loans have a 99-per-cent payback rate, which is incredible because you don’t want to disappoint the close group of women you’re working with.”

There are currently about 130 circles of between four-to-seven women each active, which shows the depth of candidates who potentially could have been in the running alongside Bake for the award.